A three-paper symposium in the Fall 2017 issue of the Journal of Economic Perspectives tackles this issue of choice and health insurance coverage. The introductory essay by Jonathan Gruber is called "Delivering Public Health Insurance through Private Plan Choice in the United States."
Then  Michael Geruso and Timothy Layton focus on the issue of "Selection in Health Insurance Markets and Its Policy Remedies," while Keith Marzilli and Justic Sydnor focus on the issue of how difficult it can be for consumers to make wise choices between health insurance plans--especially when the providers of these plans may have incentive to slant those choices in certain directions in "The Questionable Value of Having a Choice of Levels of Health Insurance."  For example, Gruber describes how US government health care spending has moved away from a "single payer" approach over time, and writes:

Or here's a figure from Geruso and Layton. When you take into account the people choosing between Medicaid managed care plans, Medicare "Advantage" plans (as part of Medicare Part C), Medicare prescription drug benefits (as part of Medicare Part D), and people choosing between health insurance plans in the insurance "marketplaces" set up by the Patient Protection and Affordable Care Act of 2010, you have a total of nearly 100 million enrollees. Of course, if you're looking at choice in health insurance more broadly, many individual also have some choices in the the health insurance plans supported by their employers, too. 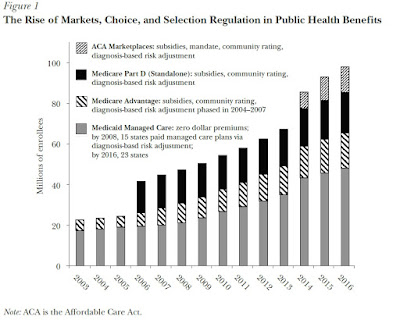 In all insurance markets, not just health insurance, choice can be a double-edged sword. On one side, choice lets people match up the characteristics of different health insurance care plans to their personal preferences and needs, which clearly can be positive. But health insurance providers here have mixed incentives: in this choice-based health insurance universe, they want to encourage people to choose their plans, but they also are trying not to attract disproportionate numbers people who are more likely to have high health care costs in the future. Health insurance plans have a very wide array of characteristics: not just the structure of deductibles, copayments, and annual caps, but also including limits on the breadth of a provider network and how costly (in terms of out-of-pocket costs) or difficult (in terms of paperwork and delay) it can be to go outside that network. Another limit can be on what types of care are covered in extreme health situations.  With these difficulties in mind, a number of conventional problems arise.

Insurance companies will have an incentive to structure their insurance plans with the idea of  attracting the more-healthy consumers, while encouraging less health consumers to shop elsewhere, which is sometimes known as "cream-skimming." Health insurance plans that would tend to be more attractive for the less healthy will tend to be packed full of out-of-pocket costs and restrictions on the network of service providers. At an extreme, health insurance plans suitable for those with high costs may become so costly or limited as to be essentially unavailable, which of course defeats the purpose of insurance altogether, which is sometimes known as "death spiral" for that market. Some of the  people who signed up for lower-cost plans, either because they expected to be healthy or just because they focused on the low costs, will instead turn out to be unhealthy--and discover that their low-cost plan provided only limited coverage.

Of course, these are exactly the issues that have been playing out in the state-level insurance "marketplaces" set up under the Affordable Care Act. Economic analysis points out that these kinds of issues are endemic to choice-based insurance markets. These problems lead to a parade of policy interventions in health insurance markets, laid out by Geruso and Layton.

There are often rules for "premium rating," which limits the price differences between insurance plans for different groups, or rules that insurance companies cannot reject an applicant outright, but must offer some kind of plan. These rules seek to avoid the problem that a consumer who is likely to have health care costs can't find an insurance policy at all, but given the many ways in which health insurance can be structured, the available policies can still look rather scanty.

The government can impose penalties for not purchasing health insurance, or subsidies for buying it. In practice, the state-level health insurance marketplaces do both of these.

"Risk adjustment" refers to the situation which a statistical formula is used to predict who is likely to have higher or lower health insurance costs--so that the government pays  that amount to the insurance company.  For example, in the Medicare Advantage program, where Medicare recipients can choose among private insurance plans rather than the government single-payer approach, the government needs to avoid a situation where the private health insurance firms just attract the healthier participants, and so it uses a risk adjustment formula. The evidence is that this risk adjustment is imperfect, in the sense that the higher payments for those expected-to-be-sick don't quite account for the higher costs, but it's better than not having it at all. Medicaid and the state-level insurance marketplaces have risk adjustment procedures, too.

Yet another policy is "contract regulation," to require that insurance firms offer certain benefits. Of course, the question of what coverage is required, and the extent to which firms can require additional payments or limit the providers for certain kinds of coverage, remain controversial.

The bottom line here is that choice in health insurance markets unleashes both good and distressing dynamics. The good dynamic is people who can select the plan that they think best suits their immediate needs, and to some extent it focuses insurance companies on providing what people actually want. The distressing dynamic is that as people do this, the health insurance market for those who need more extensive health insurance will stagger for all the reasons given above. The available public policies that seek to address this issue--premium rating, penalties/subsidies to encourage  buying insurance, risk adjustment, and contract regulations--all have understandable underlying purposes. But they add a great deal of complexity to an already messy market, and only partially address the underlying problems.

The ongoing US shift in how public health insurance is increasingly provided through private health insurance firms should influence the discussion over a "single payer" approach to health care.

Traditionally, the term "single payer" has referred to direct government payments to health care providers. In this sense, a true advocate of "single payer" in the traditional meaning cannot advocate "Medicare for all," at least not as Medicare is currently constructed, because a large part of Medicare (both the choice section in Part C and the pharmaceutical benefits Part D) is no longer a single-payer system in the traditional meaning of the term. Similarly, an expansion of Medicaid is largely an expansion of government paying health care providers directly. A supporter of "single payer" should presumably oppose both the state-level insurance "marketplaces," as well as the provision of private-sector health insurance.

Conversely, those who oppose "single payer" should contemplate whether their concerns about government control over health care are at ameliorated to some extent if the beneficiaries of those programs have a degree of choice across health insurance firms and health providers--albeit in regulated markets.
Posted by Timothy Taylor at 10:15 AM