Peter H. Lindert tackles these questions and others in "The Rise and Future of Progressive Redistribution," published as Working Paper 73 by the Commitment to Equity Institute at Tulane University (October 2017). This is a background paper for the Angus Maddison Development Lecture that Lindert recently delivered at an OECD conference.  Here's his summary of the findings:


(1) In every country supplying adequate data, government budgets have shifted resources progressively, from the rich to the poor, within the last hundred years. Before World War I, very little was redistributed through government, mainly because government was so small, due in turn to poverty, lack of state capacity, and lack of mass suffrage.

(2) For all that has been written about a shift of political sentiments and government policy away from progressivity since the late 1970s, no such trend is clear yet, pending research on more countries. A slow sustained rise in progressivity shows up in data from the United States, Argentina, and Uruguay. Among democratic welfare states, the closest thing to a demonstrable reversal against Robin Hood is the slight retreat in Sweden since the 1980s. Globally, the most dramatic swing since the late 1970s has been Chile’s record-setting return toward progressivity after the regressivity of Pinochet.

(3) Adding the effects of rising public education subsidies on the later equalization of adult earning power strongly suggests that a fuller, longer-run measure of fiscal incidence would reveal a history of still greater shift toward progressivity. This revision has its greatest impact in Japan, Korea, and Taiwan, which have excelled in raising lower ranks’ earning power through primary and secondary education, but have offered little in direct transfers to the poor.

(4) Finding that redistribution of government budgets has continued to march slowly toward progressivity carries a strong implication for our interpretation of the rise in income inequality since the 1970s, so firmly established by the World Top Incomes Project and by Thomas Piketty (2014). That rise may owe nothing to a net shift in government redistribution toward the rich, despite the lowering of top tax rates. If so, it is all the more important to explore what non-fiscal forces have widened gaps in market incomes around the world.

(5) The stability or slow advance in net fiscal progressivity since the late 1970s has not matched the rise in overall social transfers, because less-progressive public pension benefits have risen as a share of transfers, and of GDP, in most countries. That is, social insurance policy has betrayed a mission drift away from investing in children and working-age adults, and toward accepting rising pension bills. This mission drift toward the elderly implies a missed opportunity for pro-growth leveling of income. 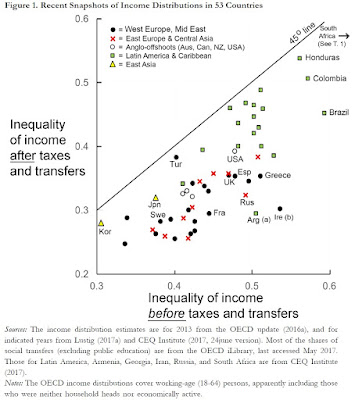 A shortcoming of this figure is that it focuses on data from a single recent year. Thus, it doesn't look at the role of education in reducing inequality over time. Lindert discusses this point at some length. He writes:

"Many studies of fiscal redistribution have already quantified a same-year effect of public subsidies to education, yet none has treated the larger deferred effects. The studies of the United States, Sweden, and Latin America do include a same-year effect, as if the benefits of taxpayers’ paying for your (say) fifth-grade education accrue to your parents this year and not to you, the student, any time in the future. Convention has thus equated public education with babysitting. As convenient as this convention may be, it misses most of what public education spending does to the different income ranks. ...

Finally, Lindert fingers an uncomfortable culprit that is likely to exert pressure over time for less progressive social spending: that is, the aging of populations around the world. He writes:


"The only clear threat to progressive social spending comes from demography and politics. All populations are aging faster than careers are lengthening, thus raising the share of adult life spent in retirement. In addition, and perhaps in response, policy has shifted toward helping the elderly and keeping them out of poverty.  This does not necessarily threaten the progressivity in government treatment of the elderly themselves, but it definitely threatens to erode progressive social spending on children and adults under 65, hurting both progressivity and economic growth. The dangerous shift in priorities can be described either as a shift from investing in people for the long run to insuring them for the short run, or, in Martin Ravallion’s (2013) terminology, a shift from promotion to protection. ...

"What trend can we foresee in this political mission drift toward favoring the elderly? The elderly share of the adult population will continue to rise. This demographic fact of life has a clear implication for providing for old age: As the share of elderly rises, their annual benefits past the age of 65 should not rise as fast as the average annual incomes of those of working age.

"This clear warning ... does not mean pensions have to drop in real purchasing power. Pensions should still keep ahead of the cost of living – it’s just that they cannot grow as fast as earned incomes per person of working age, which historically grow at about 1.8 percent a year, adjusting for inflation. ... Thus as long as consumption per elderly person keep in step with wage and salary rates, population aging threatens to raise the share of GDP devoted to subsidizing the elderly. To avoid paying for this with an upward march in tax rates, or with cutbacks in public spending on more productive – and progressive -- investments in the young, society needs to trim the relative generosity of annual pension subsidies."

There are many possible takeaways from this analysis, but here are a few of mine: 1) The growth of economic inequality around the world is mainly about economic factors, not a political retreat from redistribution. 2) In the longer-term, addressing the underlying forces that generate inequality--in particular, unnecessarily high inequality of educational opportunity and achievement--is a powerful force. 3) Helping the elderly more is going to be increasingly popular for politicians, but a tradeoff is that it becomes harder to make social investments that will pay off in the long term.
Posted by Timothy Taylor at 9:00 AM