Spending Per Student and Per Capita GDP: International Snapshots

Many of the public policy disputes over education, whether at the K-12 level or at the higher education level, quickly turn into disputes over how much to spent, or whether "enough" is being spent. For some international perspective on these issues, the Condition of Education 2018  has just been published by the National Center for Education Statistics (May 2018). It's chock-full of useful tables and figures, but here are a few from the "International Comparisons" part of the volume.

First, look at spending per student in OECD countries, as compared with per capita GDP. As the figure shows, the relationship is pretty much a straight line, in which countries with higher per capita GDP spend more on K-12 education. This makes some intuitive sense, given that  teachers are one of the main expenses in any K-12 system, and when a country has higher capita GDP, wages in general and pay for teachers in particular will be higher, too. The figure shows that while a few countries spend a little less than one might expect on K-12 education based on their per capita GDP (Mexico, Ireland) and some spend a little more (Korea, United Kingdom), most countries are quite close to the predicted line, like the United States. 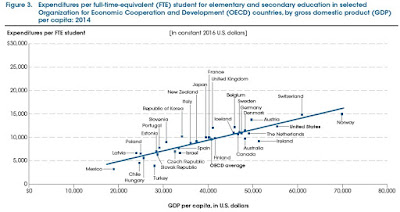 Of course, this doesn't prove whether the US should dramatically change its level of K-12 education spending. But it suggests that US K-12 spending is not out-of-line with the rest of the world in this area. 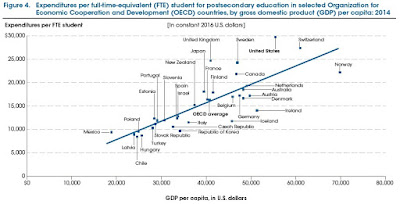 But notice that for the US, the age 55-64 group was in general more educated than the rest of the world, with the exception of Canada. But for the 25-34 group, the US is still above the OECD average in share with a postsecondary degree, but a number of other countries are now substantially ahead, and the US is much more middle-of-the-pack. When combined with the previous figure, this makes some sense. Given that the US spends vastly more on a per person basis for higher education, it's more costly for the US to provide a big expansion of higher education for the young adults of today. 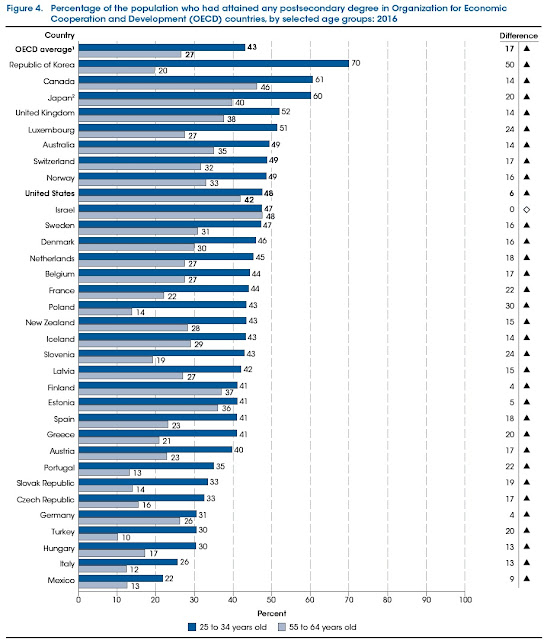