Welfare Reform: Legacy and Next Steps

Back in 1996, President Bill Clinton signed into law the Personal Responsibility and Work Opportunity Reconciliation Act (PRWORA), commonly known as "welfare reform."  The Winter 2018 issue of Pathways, published by the Stanford Center on Poverty & Inequality, offers nine short and readable essays by social scientists and a few politicians on what happened, and what should happen next. Although the welfare reform legislation gets much of the attention, a number of the authors point out that it was part of a group of legislative changes carried out at roughly the same time and intended to encourage work, including a rise in the Earned Income Tax Credit. Here are some tidbits:


"The welfare rolls indeed plummeted under the influence of welfare reform. If anything, some of the early studies underestimated the causal effect of welfare reform itself (as against the effects of economic expansion). Did it increase employment? Although there remains some ambiguity on the relative importance of the EITC and welfare reform in accounting for changes in employment, it is clear that welfare reform played an important role. In the initial years after reform, many more women joined the labor force than even the reform’s most ardent supporters had hoped. Did it reduce poverty? There are two sides to the answer to this question. It would appear that, while welfare reform assisted families with incomes close to the poverty threshold, it did less to help families in deep or extreme poverty. Under the current welfare regime, many single mothers are struggling to support their families without income or cash benefits. Even women who are willing to work often cannot find good-paying, steady employment." 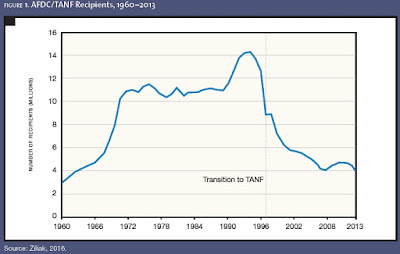 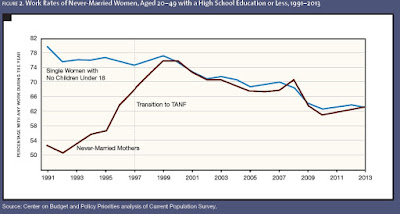 The broader public often isn't much in favor of support for the nonworking poor. Without arguing the point one way or another, I'll just note that children in such families have a rough time. H. Luke Shaefer and Kathryn Edin have been looking at US families with very little cash income, although they may receive assistance in noncash forms like Medicaid and food stamps. They write:


"The amount of federal dollars flowing to poor families grew as a result of the changes made to social welfare policy during the 1990s, but not uniformly so. More aid is now available to working poor families via refundable tax credits and expanded eligibility for the Supplemental Nutrition Assistance Program (SNAP). But the amount of assistance for non-working families has decreased, and what remains has shifted away from cash and toward in-kind benefits."

This figure shows the number of household with children receiving food stamps that report no other cash income at all. 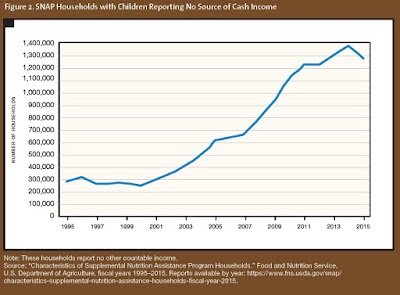 This figure shows the number of children living in households with less than $2/day per person in cash income. 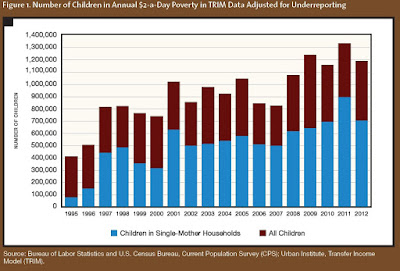 Children in low-income families are better off since 1996


"[W]elfare reform involved more than just PRWORA. Indeed, there have been many changes to safety net programs since PRWORA, including expansions of Medicaid and the Earned Income Tax Credit (EITC). In this article, we pose the following question: Has the overall set of changes to the safety net since PRWORA improved outcomes for children? To answer that question, we look at several measures of child well-being—mortality rates, teen pregnancy, drug use, and high school graduation rates—and find that across all these measures, poor children are much better off today. ...

"It is difficult to disentangle the effects of welfare reform from the economic and other changes that have occurred since the 1990s, and we will not endeavor to do so here. However, we will provide a brief overview of some of the most significant policy changes that were intended to address children’s well-being.

"First, starting in the late 1980s and continuing through the 1990s, Medicaid was expanded to cover all poor children and many children in lower-income working families, rather than only covering the children of welfare recipients. In addition, the creation of the State Children’s Health Insurance Program (SCHIP) in 1997 expanded public health insurance for poor pregnant women and children. ... Second, Congress expanded the EITC in 1993, with the goal of eliminating poverty for those who work full-time. In the same year, Congress added more money for the Food Stamp Program (now called the Supplemental Nutrition Assistance Program), which has continued to expand over time. ... Finally, in response to growing evidence about the importance of preschool environments, many states developed or expanded their public child care and preschool programs, and such programs now serve more children than Head Start. Of course, many of these programs are effectively modeled on Head Start, and both Head Start and state preschool programs have been shown to improve the short- and long-term outcomes of poor children."

"Across an array of indicators, there is little demonstrable evidence of large or significant effects of the 1996 welfare reform legislation on marriage and family formation. Since its enactment 20 years ago, we haven’t seen a return to marriage, a reduction in out-of-wedlock pregnancies, or a strengthening of two-parent families." 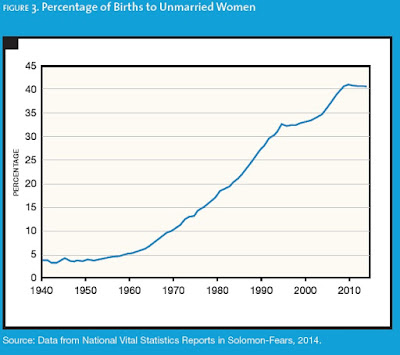 The issue starts with a useful interview with Bruce Reed, who was the head of President Clinton's Domestic Policy Council in 1996, and Newt Gingrich, who was Speaker of the House of Representatives at the time. Perhaps unsurprisingly, they both believe the 1996 legislation was a good idea, but perhaps more surprising, they both argue that a new round of welfare reform would be appropriate to address the issues that remain and have emerged.

"You shouldn’t see the 1996 act as the last dance. Let’s say it only worked for three-quarters of people who were on welfare. That’s a pretty good victory. ... Now we need a new welfare reform bill for the one-fourth who weren’t met by the last bill."