Warren Buffett is of course as the golden-touch investor who is chairman and CEO of Berkshire Hathaway. Each year he writes a letter to his shareholders, and along with an update on just what the firm did the previous year, he often discusses some broader point. In the last couple of years, Buffett's annual letter has harked back to a revealing bet he made 10 years in December 2007.

Just to set the stage, December 2007 is the leading edge of what would become the Great Recession in 2008 and 2009. But even those who were concerned about the economy at that time were not predicting that the stock market would fall by half over the next 18 months or so. But it is in December 2007 that Buffett made a bet that the average of the stock market over the following 10 years would outperform the hedge funds that were using fancy investment strategies--and charging high fees. Here's how Buffett tells the story in his 2016 letter:


"In Berkshire’s 2005 annual report, I argued that active investment management by professionals – in aggregate – would over a period of years underperform the returns achieved by rank amateurs who simply sat still. I explained that the massive fees levied by a variety of “helpers” would leave their clients – again in aggregate – worse off than if the amateurs simply invested in an unmanaged low-cost index fund. ...

"Subsequently, I publicly offered to wager $500,000 that no investment pro could select a set of at least five hedge funds – wildly-popular and high-fee investing vehicles – that would over an extended period match the performance of an unmanaged S&P-500 index fund charging only token fees. I suggested a ten-year bet and named a low-cost Vanguard S&P fund as my contender. I then sat back and waited expectantly for a parade of fund managers – who could include their own fund as one of the five – to come forth and defend their occupation. After all, these managers urged others to bet billions on their abilities. Why should they fear putting a little of their own money on the line?

"What followed was the sound of silence. Though there are thousands of professional investment managers who have amassed staggering fortunes by touting their stock-selecting prowess, only one man – Ted Seides – stepped up to my challenge. Ted was a co-manager of Protégé Partners, an asset manager that had raised money from limited partners to form a fund-of-funds – in other words, a fund that invests in multiple hedge funds.

"I hadn’t known Ted before our wager, but I like him and admire his willingness to put his money where his mouth was. He has been both straight-forward with me and meticulous in supplying all the data that both he and I have needed to monitor the bet.

"For Protégé Partners’ side of our ten-year bet, Ted picked five funds-of-funds whose results were to be averaged and compared against my Vanguard S&P index fund. The five he selected had invested their money in more than 100 hedge funds, which meant that the overall performance of the funds-of-funds would not be distorted by the good or poor results of a single manager. Each fund-of-funds, of course, operated with a layer of fees that sat above the fees charged by the hedge funds in which it had invested. In this doubling-up arrangement, the larger fees were levied by the underlying hedge funds; each of the fund-of-funds imposed an additional fee for its presumed skills in selecting hedge-fund managers. ..."

For the record, the winner of the bet would donate all gains to charity--in Buffett's case, Girls Inc. of Omaha. As he described in the 2017 letter (dated February 24, 2018), Buffett made the bet "to publicize my conviction that my pick – a virtually cost-free investment in an unmanaged S&P 500 index fund – would, over time, deliver better results than those achieved by most investment professionals, however well-regarded and incentivized those “helpers” may be." He writes:

"Protégé Partners, my counterparty to the bet, picked five “funds-of-funds” that it expected to overperform the S&P 500. That was not a small sample. Those five funds-of-funds in turn owned interests in more than 200 hedge funds.

"Essentially, Protégé, an advisory firm that knew its way around Wall Street, selected five investment experts who, in turn, employed several hundred other investment experts, each managing his or her own hedge fund. This assemblage was an elite crew, loaded with brains, adrenaline and confidence.

"The managers of the five funds-of-funds possessed a further advantage: They could – and did – rearrange their portfolios of hedge funds during the ten years, investing with new “stars” while exiting their positions in hedge funds whose managers had lost their touch.

"Every actor on Protégé’s side was highly incentivized: Both the fund-of-funds managers and the hedge-fund managers they selected significantly shared in gains, even those achieved simply because the market generally moves upwards. (In 100% of the 43 ten-year periods since we took control of Berkshire, years with gains by the S&P 500 exceeded loss years.)

"Those performance incentives, it should be emphasized, were frosting on a huge and tasty cake: Even if the funds lost money for their investors during the decade, their managers could grow very rich. That would occur because fixed fees averaging a staggering 21⁄2% of assets or so were paid every year by the fund-of-funds’ investors, with part of these fees going to the managers at the five funds-of-funds and the balance going to the 200-plus managers of the underlying hedge funds."

Here is a table showing the results. The hedge funds did better in 2008, but every year after that, they fell further behind. Buffett writes:

"The five funds-of-funds got off to a fast start, each beating the index fund in 2008. Then the roof fell in. In every one of the nine years that followed, the funds-of-funds as a whole trailed the index fund. Let me emphasize that there was nothing aberrational about stock-market behavior over the ten-year stretch. If a poll of investment “experts” had been asked late in 2007 for a forecast of long-term common-stock returns, their guesses would have likely averaged close to the 8.5% actually delivered by the S&P 500. Making money in that environment should have been easy. Indeed, Wall Street “helpers” earned staggering sums. While this group prospered, however, many of their investors experienced a lost decade." 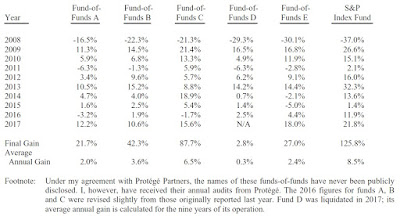 Lessons? Outguessing the market is hard, and most money manager don't succeed in doing it. Buffett writes:

"Performance comes, performance goes. Fees never falter. ... A final lesson from our bet: Stick with big, “easy” decisions and eschew activity. During the ten-year bet, the 200-plus hedge-fund managers that were involved almost certainly made tens of thousands of buy and sell decisions. Most of those managers undoubtedly thought hard about their decisions, each of which they believed would prove advantageous. In the process of investing, they studied 10-Ks, interviewed managements, read trade journals and conferred with Wall Street analysts."

Posted by Timothy Taylor at 9:32 AM