Some Economic Effects of US Import Restraints

With all the controversies over the US imposing tariffs on steel and aluminum (discussed here and here, for example), it's perhaps useful to consider an overview of what import restraints the US economy already has in place, and what effects they have had. Every three or four years, the US International Trade Commission publishes a report called: "The Economic Effects of Significant U.S. Import Restraints." The  Ninth Update came out in September 2017.  The report notes:

"[T]he United States is one of the world's most open economies. The average U.S. tariff on all goods was 1.5 percent (based on trade-weighted import values) in 2015. As tariffs fall and trade expands, households of all income levels benefit from lower-priced imports. A major part of the growth in global trade is due to the increased use of global supply chains, in which parts of the production process are completed in different countries. ...

"The U.S. International Trade Commission (USITC or Commission) estimates that the net change to total U.S. economic welfare from removing significant U.S. import restraints would be a positive one—an average annual increase of about $3.3 billion during 2015–20.  ... Among agricultural products, the restraints that currently restrict trade the most are those applied to sugar. Among manufactured goods, the most restrictive restraints are in the textile and apparel industries and in leather and allied product manufacturing, which includes footwear ... The largest effects from the removal of significant import restraints are in the textiles and apparel sector, where consumers would benefit from lower-priced imports and where net U.S. welfare would increase by $2.4 billion. ...

"The report divides all U.S. households into 10 groups, based on their income level, and
estimates the effects of removing significant U.S. import restraints on each group. A typical annual household consumption basket would cost from $54 to $288 less each year if significant import restraints were removed, depending on the household group. Higher income groups benefit more than lower ones in dollar terms because they spend more; as a share of income, all income groups benefit by about the same percentage.

"When an import restraint is removed, the U.S. price of that import declines. Producers making similar products reduce their prices to compete better, and some may shut down, thus decreasing domestically produced supply and displacing workers. Over the long run, displaced workers will likely move to jobs in other sectors, and business owners will likely invest in other, more profitable sectors. The costs to displaced workers include temporary job loss, possible lower wages in new jobs, and the costs of transitioning from one job to another. The most efficient firms will continue to produce, improving the overall efficiency of the industry, and those firms will likely increase exports. Consumers, including producers who use imports as inputs, gain from the lower prices
on imports and competing U.S.-produced goods. In total, the gains typically outweigh the costs, although some households, sectors, and regions may be harmed."

All of this is standard wisdom among economists, and thus refreshing to see it in a government report. But the mission of the report is defined in a way that numerical estimates for the gains from trade may appear lower than they actually are. Here are five reasons why:

1) By law, the mission of this report is that it can only look at restrictions on trade that are not the result of an case involving anti-dumping or a countervailing duty. The report notes: "As requested in the original letter by the USTR [US Trade Representative], this report considers all U.S. import restraints except those originating from antidumping or countervailing duty investigations, section 337 or 406 investigations, or section 301 actions." Thus, the report is required to leave out the recent steel and aluminum tariffs, and many other cases along similar lines.

2) The report is focused on the benefits of removing existing import restraints, and thus doesn't really look back on earlier gains. Import barriers around the world have dropped substantially in the last 25 years or so: "For example, the World Bank calculates that the applied weighted-mean tariff on all products for all countries with data fell from 34.0 percent in 1996 to 2.7 percent in 2010." Thus, the US economy has already been experiencing much larger gains from the reduction in trade barriers around the world.

3) The report doesn't include a quantitative estimate of benefits from reducing import barriers in service industries, which are increasingly important in the overall picture of US trade.

"Although this report does not quantitatively estimate the effects of liberalizing U.S. restraints on services imports, it does summarize key impediments to services trade in the United States for a range of services sectors, including architecture and engineering services, legal services, telecommunications, commercial banking, insurance, retail distribution, and air and maritime transport. ... [T]he United States maintains fewer or less-intense restrictions for trade in these services than other countries in the database. However, U.S. scores for air transport, maritime transport, and insurance services exceed their respective sector average scores for all countries, suggesting that the United States maintains additional or more-intense restrictions for trade in these
services."

4) In a world economy where global supply chains are increasingly prominent, products will often cross international borders a number of times. As a result, costs of customs and border procedures that don't seem especially large can add up. Reducing these costs is sometimes called the "trade facilitation" agenda. This ITC report devotes a chapter to Special Topic: Effects of Tariffs and of
Customs and Border Procedures on Global Supply Chains."

For an illustration, here's a sample of a supply chain for a microprocessor, which includes five border crossings and input from multiple countries. If one included the product in which the microprocessor is implanted, the supply chain would be even more complex. 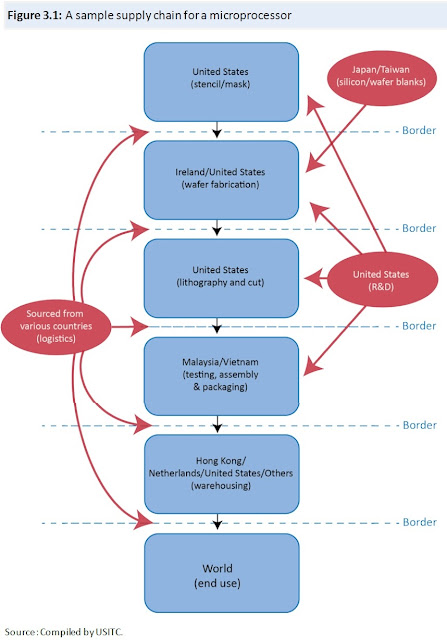 As the ITC report notes: "[S]since the 1970s, the use of foreign inputs in production has increased from about 15 percent of gross export value to between 25 and 30 percent. In recent years, more than half of global manufacturing imports, and 70 percent of services imports, are used as intermediate inputs in the production of other goods. Given this increased use of GSCs [global supply chains], the inefficiencies experienced between each stage of the supply chain have become increasingly important."

Here's a list of some hurdles a shipment faces when entering or exiting a
country":
Again, none of these may be especially large in themselves, but taken together, when multiplied over a number of border crossings, the accumulate to something larger. Many of the recently proposed trade agreements are less about reducing tariffs, and more about addressing these processes and issues.

5) US industries are disrupted all the time by factors that don't much involve trade. For example, consider the textile and apparel industry, where the $2.4 billion in welfare gains is the single biggest source of gains discussed in this report. If one could sign a deal which said that the US consumers would pay more for clothing to assure that textile workers all keep their jobs, it wouldn't sound like the worst deal in the world. Except that even without trade, the textile industry wouldn't be standing still. The report discusses two big changes that affect textile and apparel, as well as lot of other industries: automation and innovation. Thus, here is the estimate of what would happen to the US textile industry with no change at all in the import restraints.

"Significant investment in automation in the U.S. textile and apparel industry, particularly in yarn, thread, and fabric production, has depressed U.S. employment despite increases in domestic shipments. In coming years, increased capital investment in automation should contribute to a further expected decline of 3.7 percent, on average, in employment in the textile and apparel industry during 2015–20. The most significant decline is projected in the textile products (5.9 percent) and textile mills sectors (5.7 percent). At the same time, U.S. textile and apparel exports are expected to increase 2.8 percent, with U.S. apparel exports increasing by 10 percent as a result of growing demand for higher-quality, specialized, or “Made in the USA” apparel. ...

"The U.S. textile mill producers are increasingly focused on the production of technical fabrics (also known as “performance textiles”) and smart fabrics used in the automotive, construction, healthcare, sportswear, and agriculture industries, as well as in protective applications. According to the U.S. Department of Commerce, the value of U.S. technical fabric production is expected to increase by 4 percent annually on average during 2015–17 due to strong global demand. The technical and smart
fabric sectors are less price sensitive than imports of lower-cost commodity fabrics because technical and smart fabrics are produced through advanced manufacturing processes, after significant research and development, and therefore are not materially affected by the removal of import restraints. Further, one of the largest consumers of U.S.-produced technical textiles is the U.S. military, which by law must purchase its textiles from U.S. producers."

US producers and their workers face all sorts of challenges, including domestic competitors, shifts in consumer preferences, new technologies, investment of the right size and type, evolving skills and training needed by worker, government taxes and regulations, and whether management can handle these challenges. Foreign trade matters, too, of course. But if we competed hard in tackling the rest of these issues, my suspicion is that foreign trade would look a lot less threatening.
Posted by Timothy Taylor at 11:29 AM