I was hired back in 1986 to be the Managing Editor for a new academic economics journal, at the time unnamed, but which soon launched as the Journal of Economic Perspectives. The JEP is published by the American Economic Association, which back in 2011 decided--to my delight--that it would be freely available on-line, from the current issue back to the first issue. Here, I'll start with Table of Contents for the just-released Spring 2018 issue, which in the Taylor household is known as issue #124. Below that are abstracts and direct links for all of the papers. I will blog more specifically about some of the papers in the next week or two, as well. 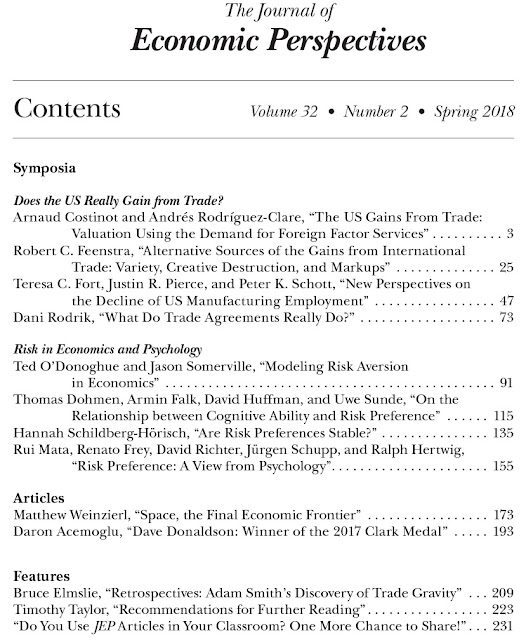 "The US Gains from Trade: Valuation Using the Demand for Foreign Factor Services," by Arnaud Costinot and Andrés Rodríguez-Clare
About eight cents out of every dollar spent in the United States is spent on imports. What if, because of a wall or some other extreme policy intervention, imports were to remain on the other side of the US border? How much would US consumers be willing to pay to prevent this hypothetical policy change from taking place? The answer to this question represents the welfare cost from autarky or, equivalently, the welfare gains from trade. In this article, we discuss how to evaluate these gains using estimates of the demand for foreign factor services.
Full-Text Access | Supplementary Materials


"New Perspectives on the Decline of US Manufacturing Employment," by Teresa C. Fort, Justin R. Pierce and Peter K. Schott
We use relatively unexplored dimensions of US microdata to examine how US manufacturing employment has evolved across industries, firms, establishments, and regions. These data provide support for both trade- and technology-based explanations of the overall decline of employment over this period, while also highlighting the difficulties of estimating an overall contribution for each mechanism. Toward that end, we discuss how more careful analysis of these trends might yield sharper insights.
Full-Text Access | Supplementary Materials

"What Do Trade Agreements Really Do?" by Dani Rodrik
Economists have a tendency to associate "free trade agreements" all too closely with "free trade." They may be unaware of some of the new (and often problematic) beyond-the-border features of current trade agreements. As trade agreements have evolved and gone beyond import tariffs and quotas into regulatory rules and harmonization—intellectual property, health and safety rules, labor standards, investment measures, investor-state dispute settlement procedures, and others—they have become harder to fit into received economic theory. It is possible that rather than neutralizing the protectionists, trade agreements may empower a different set of rent-seeking interests and politically well-connected firms—international banks, pharmaceutical companies, and multinational firms. Trade agreements could still result in freer, mutually beneficial trade, through exchange of market access. They could result in the global upgrading of regulations and standards, for labor, say, or the environment. But they could also produce purely redistributive outcomes under the guise of "freer trade." As trade agreements become less about tariffs and nontariff barriers at the border and more about domestic rules and regulations, economists might do well to worry more about the latter possibility.
Full-Text Access | Supplementary Materials

Symposium: Risk in Economics and Psychology


"On the Relationship between Cognitive Ability and Risk Preference," by Thomas Dohmen, Armin Falk, David Huffman and Uwe Sunde
This paper will focus on the relationship between cognitive ability and decision-making under risk and uncertainty. Taken as a whole, this research indicates that cognitive ability is associated with risk-taking behavior in various contexts and life domains, including incentivized choices between lotteries in controlled environments, behavior in nonexperimental settings, and self-reported tendency to take risks. One pattern that emerges frequently in these studies is that cognitive ability tends to be positively correlated with avoidance of harmful risky situations, but it tends to be negatively correlated with risk aversion in advantageous situations. We conclude by discussing perspectives for future research, in particular the scope for the development of richer sets of elicitation instruments and measurement across a wider range of concepts.
Full-Text Access | Supplementary Materials

"Risk Preference: A View from Psychology," by Rui Mata, Renato Frey, David Richter, Jürgen Schupp and Ralph Hertwig
Psychology offers conceptual and analytic tools that can advance the discussion on the nature of risk preference and its measurement in the behavioral sciences. We discuss the revealed and stated preference measurement traditions, which have coexisted in both psychology and economics in the study of risk preferences, and explore issues of temporal stability, convergent validity, and predictive validity with regard to measurement of risk preferences. As for temporal stability, do risk preference as a psychological trait show a degree of stability over time that approximates what has been established for other major traits, such as intelligence, or, alternatively, are they more similar in stability to transitory psychological states, such as emotional states? Convergent validity refers to the degree to which different measures of a psychological construct capture a common underlying characteristic or trait. Do measures of risk preference all capture a unitary psychological trait that is indicative of risky behavior across various domains, or do they capture various traits that independently contribute to risky behavior in specific areas of life, such as financial, health, and recreational domains? Predictive validity refers to the extent to which a psychological trait has power in forecasting behavior. Intelligence and major personality traits have been shown to predict important life outcomes, such as academic and professional achievement, which suggests there could be studies of the short- and long-term outcomes of risk preference—something lacking in current psychological (and economic) research. We discuss the current empirical knowledge on risk preferences in light of these considerations.
Full-Text Access | Supplementary Materials

"Space, the Final Economic Frontier," by Matthew Weinzierl
After decades of centralized control of economic activity in space, NASA and US policymakers have begun to cede the direction of human activities in space to commercial companies. NASA garnered more than 0.7 percent of GDP in the mid-1960s, but is only around 0.1 percent of GDP today. Meanwhile, space has become big business, with $300 billion in annual revenue. The shift from public to private priorities in space is especially significant because a widely shared goal among commercial space's leaders is the achievement of a large-scale, largely self-sufficient, developed space economy. Jeff Bezos, has stated that the mission of his firm Blue Origin is "millions of people living and working in space." Elon Musk, founder of SpaceX, has laid out plans to build a city of a million people on Mars within the next century. Both Neil deGrasse Tyson and Peter Diamandis have been given credit for stating that Earth's first trillionaire will be an asteroid-miner. Such visions are clearly not going to become reality in the near future. But detailed roadmaps to them are being produced and recent progress in the required technologies has been dramatic. If such space-economy visions are even partially realized, the implications for society will be enormous. Though economists should treat the prospect of a developed space economy with healthy skepticism, it would be irresponsible to treat it as science fiction. In this article, I provide an analytical framework—based on classic economic analysis of the role of government in market economies—for understanding and managing the development of the space economy.
Full-Text Access | Supplementary Materials


"Dave Donaldson: Winner of the 2017 Clark Medal," by Daron Acemoglu
The 2017 John Bates Clark Medal of the American Economic Association was awarded to Dave Donaldson for his path-breaking contributions in international trade. Donaldson’s work sheds light on some of the central questions of international economics, ranging from the economic and welfare implications of market integration within a country to testing the core empirical predictions of models of international trade based on comparative advantage. In these areas, empirical work faces the challenge of taking into account the broader equilibrium implications of changes in policies or economic conditions—that is, the possibility that bilateral relations between two regions or countries will affect others via trade diversion or their effects on equilibrium prices. Donaldson’s work has managed to address these challenges by combining careful theory with detailed and creative empirical work. Indeed, this research strategy has turned Dave into a leader in the revival of empirical work in international trade.
Full-Text Access | Supplementary Materials


"Retrospectives: Adam Smith's Discovery of Trade Gravity," by Bruce Elmslie
The gravity equation is a current workhorse of empirical trade theory. It is generally acknowledged that this theory, which relates the extent of trade between countries to their respective sizes, distances, and relative trade barriers, was first developed by Jan Tinbergen in 1962. Acceptance of the gravity model as part of the discipline's core was limited by its scant theoretical foundation for the first 40 years of its existence. This paper finds that a theory of trade gravity was first developed by Adam Smith in The Wealth of Nations. Moreover, it is shown that Smith's statement of a proportional relation between economic size and distance came about as an application of his general theory of differential capital productivity in different economic sectors, and his elaboration of a theory of the gains from trade originated by David Hume. It is further shown that Smith had an explanation of the size of border affects in trade volumes, and a gravity theory of trade restrictions.
Full-Text Access | Supplementary Materials


"Do You Use JEP Articles in Your Classroom? One More Chance to Share!"
Full-Text Access | Supplementary Materials
Posted by Timothy Taylor at 11:25 AM