The Rising Number of US Teachers Leaving for Other Fields

The rate of US teachers leaving for other jobs is on the rise. Adam Grundy of the US Census Bureau reports in a short note (May 2018):

"Teachers are leaving their jobs for other careers at a rate that has grown steadily every year in the past three years. ... The majority of educators leaving Educational Services (NAICS Sector 61) are starting careers in the Healthcare and Social Assistance sector. ... For starters, some jobs in Healthcare and Social Assistance, which includes nurses, child care and family assistance services, often require some of the same skills. “Administrative Services,” which includes office workers, is another category that attracts many educators leaving the workforce. Moves to these industries are not surprising since they are two of the largest sectors of the economy. ... Educators aged 25-34 are the largest cohort of job-to-job movers."

For more details, a useful starting point is "Teacher Turnover:Why It Matters and What We Can Do About It," by  Desiree Carver-Thomas and Linda Darling-Hammond, published by the Learning Policy Institute (August 2017). They write:

"The percentage of teachers leaving the profession—known as “leavers”—has increased substantially over the past two decades: 5.1% of public school teachers left the workforce in 1992, while 8.4% left in 2005. Attrition rates have continued to hover around 8% since then (see Figure 1).The 3% increase in attrition rates is not trivial: It amounts to about 90,000 additional teachers needing to be hired across the U.S. each year. In high-achieving school systems such as those in Finland, Singapore, and Ontario, Canada, annual teacher attrition rates typically average as low as 3% to 4%. If attrition rates in the U.S. could be reduced by half to be more comparable with these systems, the national teacher shortage could be virtually eliminated." 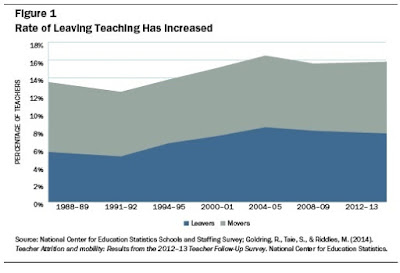 Here's some additional summary of the report by Carver-Thomas and Darling-Hammond:

Not only does turnover contribute to shortages, teacher movement out of schools and out of teaching creates costs for the schools they leave behind. Estimates exceed $20,000 to replace each teacher who leaves an urban school district.  Most importantly, high turnover rates reduce achievement for students whose classrooms are directly affected, as well as for other students in the school. Our analysis of nationally representative survey data from the 2012 Schools and Staffing Survey and the 2013 Teacher Follow-up Survey reveals that the severity of turnover varies markedly across the country:

The authors offer a number of sensible suggestions for retaining teachers along the lines of higher pay, better administrative support and working conditions, and so on. I don't disagree. But it also seem to me that those low-performing schools which also serve high share of low-income students may in some cases need a bigger and perhaps even jolting set of changes, perhaps drawing on lessons about approaches to curriculum and teaching, along with intensive tutoring, used at successful charter schools.
Posted by Timothy Taylor at 9:46 AM