Last week, the Federal Open Market Committee announced that it would "lower the target range for the federal funds rate to 1-3/4 to 2 percent." The previous target range had been from 2 to 2-1/4 percent.

As usual, the change raises further questions. Less than a  year ago, a common belief was that the Fed viewed "normalized" interest rates as being in the target range of 3 to 3-1/4%. Starting in 2015, the Fed had been steadily raising the target zone for the federal funds interest rate, reaching as high as a range of 2-1/4 to 2-1/2% in December 2018. But then in July 2019 there was a cut of 1/4%, now there has been another cut of 1/4% and a number of commenters are suggesting that further cuts are likely.

So should this succession of interest rate cuts  be viewed as detour on the road to the Fed's desire to reach a target range for the federal funds interest of 3 to 3-1/4%? Back in the mid-1990s, for example, Fed Chairman Alan Greenspan famously held off on raising the federal funds interest rate for some years because he believed (as it turn out, correctly) that the economic expansion of that time was not yet running into an danger of higher inflation or other macroeconomic limits.

Or on the other hand, should the fall in interest rates be considered a  prelude to larger cuts in the next year or two. For example, President Trump has advocated via Twitter that the Fed should be pushing interest rates down to zero percent or less: 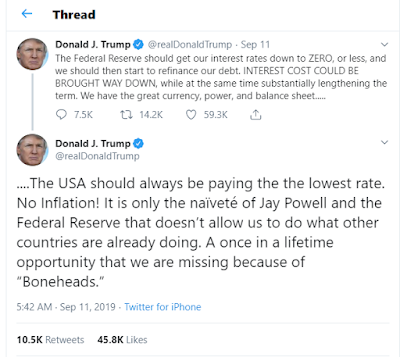 Here, I'll duck making predictions about what will happen next, and focus instead on a potentially not-so-funny thing that happened on the way to the interest rate cuts. What happened was that when the Fed wanted to reduce interest rates, one of the two main tools that the Fed now uses had its interest rate soar upward instead--and required a large infusion of funds from the Fed. Some background will be helpful here.

When the Fed decided to start raising the federal funds interest rate in 2015, it also needed to use new policy tools to do so. The old policy tools from before the Great Recession relied on the fact that the reserves that banks held with the Federal Reserve system were close to the minimum required level. For example, in mid-2008, banks were required to hold about $40 billion in reserves with the Fed, and they held roughly an extra $2 billion above that amount. But today, after years of quantitative easing, banks are required to hold about $140 billion dollars of reserves with the Fed, but instead are holding about $1.5 trillion in total reserves.

With these very high levels of bank reserves, the old-style monetary policies you may remember from a long-ago intro econ class--open market operations, changing the reserve requirement, or changing the discount rates--won't work any more. So the Fed invented two new ways of conducting monetary policy. For an overview of the change, Jane E. Ihrig, Ellen E. Meade, and Gretchen C. Weinbach discuss "Rewriting Monetary Policy 101: What’s the Fed’s Preferred Post-Crisis Approach to Raising Interest Rates?" in the Fall 2015 issue of the Journal of Economic Perspectives.

One is to change the interest rate that the Federal Reserve pays on excess reserves held by banks. To imagine how this works, say that a bank can get, say, a 2% return from the Fed for its excess reserves. Then the Fed cuts this interest rate to 1.8%. The lower return on its reserve holdings should encourage the bank to do some additional lending.

However, the Fed in 2015 couldn't be sure if moving the interest rate on excess reserves would give it enough control over the federal funds interest rate that it wishes to target. Thus, the Fed stated that "it intended to use an overnight reverse repurchase agreement (ON RRP) facility as needed as a supplementary policy tool to help control the federal funds rate ... The Committee stated that it would use an ON RRP facility only to the extent necessary and will phase it out when it is no longer needed to help control the funds rate."

So what is a repurchase agreement, or a reverse repurchase agreement, and how is the Fed using them? A repo agreement is a way for parties that are  holding cash to lend it out, overnight, to parties that would like to borrow that cash overnight. However, the way it contractually works is that one set of firms sign an agreement to buy an asset from the other firm, like a US Treasury bond, and then the first firm agrees to repurchase that asset the next day for a slightly higher price. Here's a readable overview of the repo market from Bloomberg.

The story of what went wrong  last week can be told in two figures. When the Fed was announcing that it was going to reduce interest rates, the interest rates in the market for repurchase agreements suddenly soared instead. This interest rate has been hovering at a little above 2%, just about where the Fed wanted it. But when the Fed announced that it wanted a lower federal funds interest rate, the repo rate spiked. 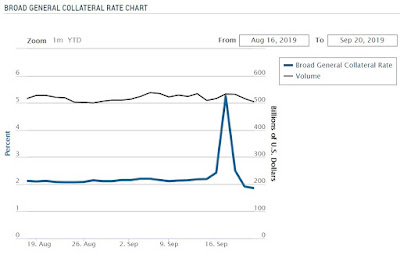 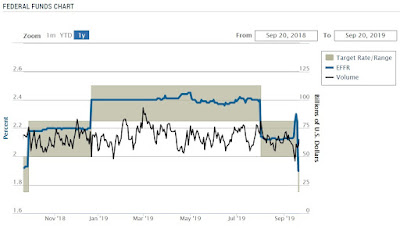 In one way, this is no big deal. The Fed did get the interest rate back under control. It responded to the spike in the overnight repo rate by offering to provide that market with up to $75 billion in additional lending, per day, for the next few weeks. With this spigot of cash available for borrowing, there's no reason for this interest rate to spike again.

But at a deeper level, there's some reason for concern. The Fed has been hoping to use the interest rate on excess reserves as its main monetary policy tool, but last week, that tool wasn't enough. In hindsight, financial analysts can point to this or that reason why the overnight rate suddenly spiked to 10%. A common story seems to be that there was a rie isn demand for short-term cash from companies making tax payments, but a surge in Treasury borrowing had termporarily soaked up a lot of the available cash,  and bank reserves at the Fed have been trending down for a time which also means less cash potentially available for short-run lending. But at least to me, those kinds reasons are both plausible and smell faintly of after-the-fact rationalization. Last week was the first time that the Fed  had needed to offer additional cash in the repo market in a decade.

In short, something unexpectedly and without advance warning went wrong with the Fed's preferred back-up tool for conducting monetary policy last week. If or when the Fed tries to reduce interest rates again, the functioning of its monetary policy tools will be the subject of hyperintense observation and speculation in financial markets.
Posted by Timothy Taylor at 9:00 AM