The economies of Latin America have gone through a series of different periods in the half-century or so. There was an "import substitution" period back in the 1960s and 1970s, where the idea was that government would direct industrial development in a way that would remove the need for imports from high-income countries. This was followed by the "lost decade" of the 1980s, a period of very high inflation, slow growth, and defaults on government debt. The 1990s was sometimes labeled as at time of economic liberalization or the so-called "Washington consensus." Starting around 2000, there was a "commodity supercycle" when first a global rise in commodity prices led to faster growth across much of Latin America, but then more recently a drop in commodity prices slowed down that growth.

Many pixels have been spent arguing over these changes. But as these different periods have come and gone, you know what hasn't much changed? The region of Latin America has been slowly falling farther behind the high-income countries countries of the world in economic terms, while remaining the region with the most unequal distribution of income. The McKinsey Global Institute lays out these patterns and offers some analysis in "Latin America’s missing middle: Rebooting inclusive growth" (May 2019).

Her's a figure showing per capita GDP in Latin America since 1960, relative to high income countries. Over that period, the region has been falling behind, not converging. Moreover, the middle income "benchmark" countries--which in this figure refers to a weighted average of to China, Indonesia, Malaysia, Philippines, Poland, Russia, South Africa, Thailand, and Turkey--has gone from less than one-third of the Latin American level to above it. 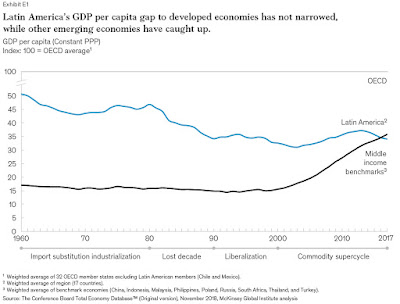 Inequality in the Latin American region has remained high as well throughout this time period. This figure shows that if you look at the share of income received by the bottom 50%, or by the bottom 90%, it's lower in Latin America than in any other region. 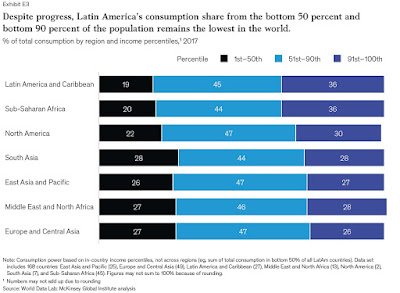 How can these dual problems of slow productivity growth and high levels of inequality be addressed? the MGI report argues that the underlying problem is a business climate in Latin America which appears to be strangling medium-sized and larger firms. As a result, a large share of the population is trapped in small, low-productivity, informal employment, with no prospect for change. The report notes:


The business landscape in Latin America is polarized. The region has some powerful companies, including some with very high productivity that have successfully expanded from their strong local base to become global companies or “multilatinas”—regional powerhouses operating across Latin America. They include AB InBev, America Movil, Arcor, Bimbo, CEMEX, Embraer, FEMSA, Techint Group, among others. By comparison with large firms in other regions, such companies are fewer in number and less diversified beyond energy, materials, and utilities. At the same time, Latin America has a long tail of small, often informal companies that collectively provide large-scale employment, but whose low productivity and stagnant growth hold back the economy.
Missing is a cohort of vibrant midsize companies that could bring dynamism and competitive pressure to expand the number of productive and well-paying jobs in Latin America, much as these firms do in many high-performing emerging regions. ...

The causes of this firm distribution and dynamics are rooted in common legacies of import substitution that favored a few private licenses or large state-run firms in many sectors. Other reasons are differing ways in which state companies were privatized and, especially in Brazil’s case, tax and compliance-heavy regulation that favors either large scale or informality. Unequal access to finance, weak infrastructure, and high input costs also squeeze the middle. The result is a weak level of innovation and specialization needed for future growth. ... Much of Latin America’s labor force is trapped in a long tail of small, unproductive, and
often informal firms ...

The MGI report suggests how a focus on digital technologies might help, making it "easier for companies to open businesses, register property, and file taxes over the internet, reducing the cost of red tape. Digital can facilitate more efficient markets from land and jobs to local services. Digital platforms make it possible for small and midsize companies to become `micromultinationals' able to compete with much larger competitors by offering their goods and services through online marketplaces regionally or globally."

That's not a bad suggestion, but my sense is that Latin America's failure to provide a business climate that fosters middle-sized and larger firms runs deeper.  For example, an earlier post on  "Mexico Misallocated" (January 24, 2019) describes how many government rules about companies and employment are based on the size of the firm. Taken together, these rules in combination have led to a bias in favor of new firms, but against the growth of existing firms. Moreover, the existing laws and regulations in Mexico have led to a common pattern of high-productivity firms exiting markets, while low-productivity firms enter them.

Throughout the world, the success stories of economic development have been led by the growth of private-sector firms of medium- and large-scale. The governments and people of Latin America need to think more deeply about public policy is hindering the growth of such firms.