Is the US Dollar Fading as the World's Dominant Currency?

When I'm talking to a public group, it's surprisingly common for me to get questions about when or whether the US dollar will fade as the world's dominant currency. Eswar Prasad offers some evidence on this question in "Has the dollar lost ground as thedominant internationalcurrency?" (Brookings Institution, September 2019). Prasad writes:


Currencies that are prominent in international financial markets play several related but distinct roles—as mediums of exchange, units of account, and stores of value. Oil and other commodity contracts are mostly denominated in U.S. dollars, making it an important unit of account. The dollar is the dominant invoicing currency in international trade transactions, especially if one excludes trade within Europe and European countries’ trade with the rest of the world, a significant fraction of which is invoiced in euros. The dollar and euro together account for about three-quarters of international payments made to settle cross-border trade and financial transactions, making them the leading mediums of exchange.

Prasad digs into the data about the share of US dollar holdings in foreign exchange reserves of central banks. The IMF collects this data. In the last few years, the US dollar share of "allocated" foreign reserves has fallen from 66% to 62%, which seems like a relatively big drop in a short time--depending on what that word "allocated" means. 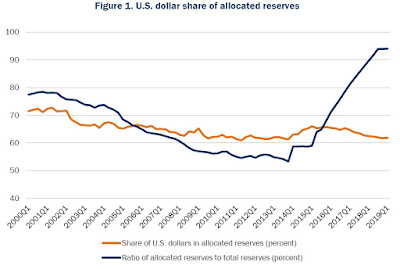 As Prasad explains, countries don't always report the currencies in which they are holding foreign exchange reserves, because they don't have to do so and the information might feel sensitive. The  IMF promises that it will keep the country-level information confidential, and only report, the aggregate numbers--as in the figure. If a central bank does reveal what currency that it is holding for foreign exchange reserves, this amount is "allocated." Thus, the blue line in the figure shows that central banks have become much more willing to tell the IMF, confidentially, what currencies they are  holding.


Prasad argues: "The recent seemingly precipitous four-percentage-point decline in the dollar’s share of global FX reserves, from 66 percent in 2015 to 62 percent in 2018, is probably a statistical artifact related to changes in the reporting of reserves. This shift in the dollar’s share was likely affected by how China and other previous non-reporters chose to report the currency composition of their reserves, which they did gradually over the 2014-2018 period."

Yet another measure of the US dollar as a global currency is its use in international payments made through the SWIFT system (which stands for Society for Worldwide Interbank Financial Telecommunication). Prasad offers some evidence here: "For instance, from 2012 to 2019, the dollar’s share of cross-border payments intermediated through the SWIFT messaging network has risen by 10 percentage points to 40 percent, while the euro’s share has declined by 10 percentage points to 34 percent. The renminbi’s share of global payments has fallen back to under 2 percent."

In short, the US dollar has been maintaining its dominance as the world's dominant currency in recent years. There is some movement back and forth between the rest of the currencies in the world--the EU euro, China's renminbi yuan, Japanese yen, British pound, Swiss franc, and others--but the international leadership of the US dollar has not been significantly challenged. As Prasad writes:


[G]iven the ongoing economic difficulties and political tensions in the eurozone, it is difficult to envision the euro posing much of a challenge to the dollar’s dominance as a reserve currency or even as an international payment currency.

Does the renminbi pose a realistic challenge to the dollar in the long run? China’s large and rising weight in global GDP and trade will no doubt stimulate greater use of the renminbi in the denomination and settlement of cross-border trade and financial transactions. The renminbi’s role as an international payment currency will, however, be constrained by the Chinese government’s unwillingness to free up the capital account and to allow the currency’s value to be determined by market forces.  ...

While change might eventually come, the recent strengthening of certain aspects of the dollar’s dominance in global finance suggests that such change could be far off into the future. It would require substantial changes in the economic and, in some cases, financial and institutional structures of major economies accompanied by significant modifications to the system of global governance. For now and into the foreseeable future—and given the lack of viable alternatives—the dollar reigns supreme.