One of the key questions in the escalating US trade disputes with China and other countries is how much the economy of other countries depends on trade. The answer helps to determine how much leverage the US has in trade disputes. Thus, it's interesting to note that starting about a decade ago, both India and China started reducing their dependence on exports as a source of growth, while doing more to build internal supply chains and relying more on domestic products.

A group of authors from McKinsey Global Institute published "Asia’s futureis now" in July 2019, including Oliver Tonby, Jonathan Woetzel, Wonsik Choi, Jeongmin Seong, and Patti Wang. Here'a a figure showing how the reliance of China and India on exports has been falling. 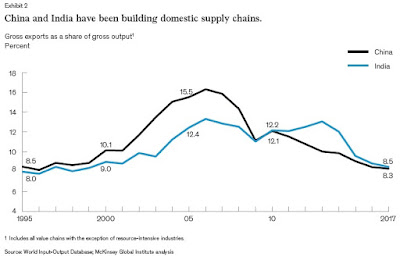 
As consumption rises, more of what gets made in these countries is now sold locally instead of being exported to the West. Over the decade from 2007 to 2017, China almost tripled its production of labor-intensive goods, from US$3.1 trillion to US$8.8 trillion. At the same time, the share of gross output China exports has dramatically decreased, from 15.5 percent to 8.3 percent. India has similarly been exporting a smaller share of its output over time (Exhibit 2). This implies that more goods are being consumed domestically rather than exported. Furthermore, as the region’s emerging economies develop new industrial capabilities and begin making more sophisticated products, they are becoming less reliant on foreign imports of both intermediate inputs and final goods. The previous era of globalization was marked by Western companies building supply chains that stretched halfway around the world as they sought out the lowest possible labor costs—and often their supply chains ran through Asia. Now labor arbitrage is on the wane. Only 18 percent of today’s goods trade now involves exports from low-wage countries to high-wage countries—a far smaller share than most people assume and one that is declining in many industries. ....

Asian consumers have long had a strong preference for foreign luxury goods and brands. But things are changing. The post-90’s generation is starting to lose this bias against domestic brands; in fact, they are starting to choose them over foreign brands more often. ...

Wages in China have risen substantially in the last couple of decades. As a result, the rising manufacturing hubs in Asia are now in places like Vietnam and Indonesia. In addition, many of the international economic ties are within Asian countries, rather than being between China and the United States.


Historically China was known as the “factory to the world.” But while low-cost labor was its original competitive advantage, the wage gap between China and the rest of Asia is closing. In 1996, wages in Japan were 46 times higher than in China; by 2016, they were only four times higher. China is moving up the value chain, and as it transitions, other locations around Asia are stepping into some of its former niches. Vietnam, in particular, has become a hub of labor-intensive manufacturing for export. The country has attracted a flood of greenfield investment into cities such as Hai Phong. In addition to Hai Phong (Vietnam), Ho Chi Minh City (Vietnam), Bekasi (Indonesia), and Xi’an (China) are rising makers of electronics. As new places assume new roles in industry value chains, a new set of cities begins to benefit from the influx of capital. Investment in factories leads to new roads, new jobs, and urbanization. Much of the capital flowing into Vietnam comes from South Korea and Japan. These new manufacturing hubs speak not only to the rise of emerging Asian countries but also to a region that is more connected and co-invested.