Is the US Economy Having an Engels' Pause?

Consider a time period of several decades when there is a high level of technological progress, but typical wage levels remain stagnant while profits soar, driving a sharp rise in inequality. In broad-brush terms, this description fits the US economy for the last few decades. But it also fits the economy of the United Kingdom during the first wave of the Industrial Revolution in the first half of the 19th century.

Economic historian Robert C. Allen calls this the "Engels' pause," because Friedrich Engels, writing in books like The Condition of the Working Class in England in 1844, described this confluence of economic patterns. Allen laid out the argument about 10 years ago in "Engels’ pause: Technical change, capital accumulation, and inequality in the British industrial revolution," published in Explorations in Economic History (2009, 46: pp. 418–435).

Allen summarizes his argument about the arrival and then the departure of the Engels' pause in this way:


According to the Crafts-Harley estimates of British GDP, output per worker rose by 46% between 1780 and 1840. Over the same period, Feinstein’s real wage index rose by only 12%. It was only a slight exaggeration to say that the average real wage was constant, and it certainly rose much less than output per worker. This was the period, and the circumstances, described by Engels in The Condition of the Working Class. In the next 60 years, however, the situation changed. Between 1840 and 1900, output per worker increased by 90% and the real wage by 123%. This was the ‘modern’ pattern in which labour productivity and wages advance at roughly the same rate, and it emerged in
Britain around the time Engels wrote his famous book. 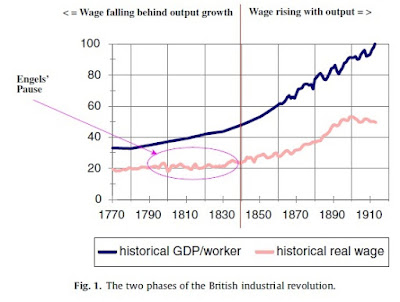 Of course, historical parallels are never perfect. The prominent inventions of the first half of the late 18th and early 19th century--mechanical spinning, coke smelting, iron puddling, the power loom, the railroad, and the application of steam power--did not have an identical interaction with labor markets and workers as the rise of modern technologies like information technology, materials science, genetics research, and others.

In addition, historical parallels do not dictate what the appropriate policy response should be.
As one example, the kinds of active labor market policies available to governments in the 21st century (for discussion, see here, here, and here) are quite different from the United Kingdom in the 19th century. The problems of modern middle-income workers in high-income countries are obviously not the same as the problems of UK workers in 1840.

Also, modern economic historians argue over whether UK wages were really not rising much in the early 1900s, and current economist argue over the extent to which increases technology and variety suggest that the standard of living of typical modern workers is growing by more than their paychecks might suggest.

But historical parallels are nonetheless interesting. But it's interesting that the original Engels' pause led to calls for socialism, and that socialism as a broad idea, if not necessarily a well-defined policy program, has re-entered the public discussion today. Historical parallels offer a reminder that when sustained shifts in an economy occur over several decades--a rise in inequality, wages rising more slowly than output, sustained high profit levels--the causes are more likely to involve shifts in economic output and organization driven by underlying factors like technology or demographics, not by factors like selfishness, conspiracies, or malevolence (whose prevalence does not shift as much, and are always with us). Finally, the theory of the Engels' pause suggests that underlying economic forces can drive patterns rising inequality, high profits, and stagnant wages can persist for decades, but nonetheless can have a momentum that leads to their eventual reversal, although my crystal ball is not telling me when or  how that will happen.