Here's a description of the Arab "social contract" and "development model" according to a recent report by Adel Abdellatif, Paola Pagliani, and Ellen Hsu, "Leaving No One Behind Towards Inclusive Citizenship in Arab Countries" (July 2019). It an Arab Human Development Report Research Paper, written for the Regional Bureau for Arab States in the UN Development Programme. They write:


The social contract that emerged from and continues to evolve as a result of contesting and bargaining stemmed from the state-building and formation after Arab states won their independence in the 1950s–1970s. The emergence of independent states was associated with a strong nationalistic sentiment and the idea that the state should be the provider and engine of social and economic development. Despite considerable variation across countries, which was affected by natural resources endowments, the dominant model of development from the 1950s onward was having limited political participation and civil and political liberties in exchange for material benefits such as services, subsidies and employment. The model was based on strong central states overseeing and driving economic and social priorities while implementing wide-scale policies for redistribution and equity. It rested on four main pillars:


In  keeping with the development model, a large share of total employment--often more than 20%--is in the public sector. 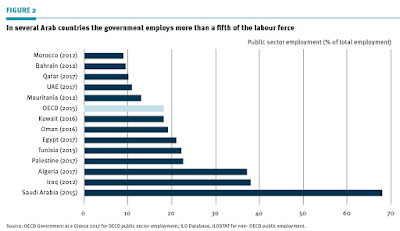 This model can claim some successes. For example, life expectancy at birth in Arab countries was about 55 years in 1970, below the world average of 58 years. Now, life expectancy in Arab countries is about 76 years, above the world average of 73 years. However, human development gains for countries in the Arab world have generally slipped back since 2010. The big drop in global oil prices back around 2014 has meant a reduction in resources for oil-exporting countries in the Middle East, and lower spillover buying power for the non-oil exporters in the region.

The emphasis of the report is that many of the countries in the region do not have "inclusive citizenship. For example, females in Arab countries lag males by more than the usual average for emerging-market economies in areas like education and political representation. The report notes:


The greatest measurable disparities are economic: globally women’s income is 57 percent of men’s, but Arab women’s income is only 21 percent of Arab men’s. Unequal gendered division of labour—both in unpaid care and domestic work and in the labour market—is a major characteristic of gender economic inequality across the Arab region. Women’s participation in the formal labour market remains among the lowest globally because of both cultural norms and weak incentives

There are big gaps between rural and urban areas, and within urban areas, "[i]n at least seven countries with data, more than half of the urban population lives in slums." The concerns just keep coming:

Unaccountable and unresponsive public institutions as well as perceived widespread corruption often drive exclusion and disenfranchisement for large segments of the population. ... A substantial number of citizens believe that the institutions meant to take care of their needs are leaving them behind ... Trust in elected bodies, those that should be in charge of redesigning the social contract, is particularly low. Lack of trust is also reflected in low electoral turnouts—below 50 percent in most countries ... Perceptions of ineffective institutions seem confirmed by stagnating or narrowly based economic structures, high unemployment, young people facing difficult prospects to secure their future and uneven provision of social services and social protection nets. Unemployment, averaging 10 percent, almost double the world average, disproportionately affects young people, at 25 percent. ... 84% of the population is affected by or at risk of water scarcity. The decline of arable land and the dependency on food imports expose the population to risks of food insecurity ...

Yes, there's some discussion about how subsidies for energy prices that end up mainly benefiting the well-to-do, who after all use more energy, could be converted to to support for the poor. This is a problem in a lot of countries (for an overview, see this IMF working paper). But the challenges facing the Arab development model aren't about recalibrating some subsidies. The problem is that a "development model" based on high public employment, along with lots of social services and subsidies, needs substantial numbers of firms in a solid underlying economy to provide jobs and tax revenues and growth.

For some earlier posts on the economic outlook for the Middle East, see: