The US had 50,000 opioid-involved overdose deaths in 2019. This is similar to the number of people who died of AIDS at the peak of that crisis in 1995. For comparison, total deaths in car crashes is about 40,000 per year. My dark suspicion is that the opioid crisis gets less national media attention because its worse effects are concentrated in parts of Appalachia, New England, and certain mid-Atlantic states, rather than in big coastal cities.

For a thoughtful overview of the topic, I recommend The Future of Fentanyl and Other Synthetic Opioids, a book by Bryce Pardo, Jirka Taylor, Jonathan P. Caulkins, Beau Kilmer, Peter Reuter, Bradley D. Stein (RAND Institute 2019). Here are some points that caught my eye, but there's a lot more detail in the book.

"Although the media and the public describe an opioid epidemic, it is more accurate to think of it as a series of overlapping and interrelated epidemics of pharmacologically similar substances—the opioid class of drugs. Ciccarone (2017, p. 107) refers to a “triple wave epidemic”: The first wave was prescription opioids, the second wave was heroin, and the third—and ongoing—wave is synthetic opioids, such as fentanyl." 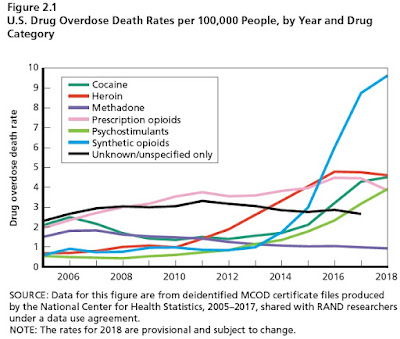 Fentanyl and other synthetic opioids have been around for decades. Indeed, the book describe four previous US episodes where there was a localized surge of production followed by a number of deaths. What makes it different this time around? The answer seems to be production of very cheap and powerful synthetic opioids in China. The report notes (citations and footnotes omitted):

The current wave of overdoses is largely attributable to illicitly manufactured fentanyl. Most of the fentanyl and novel synthetic opioids in U.S. street markets—as well as their precursor chemicals—originate in China, where the regulatory system does not effectively police the country’s expansive pharmaceutical and chemical industries According to federal law enforcement, synthetic opioids arrive in U.S. markets directly from Chinese manufacturers via the post, private couriers (e.g., UPS, FedEx), cargo, by smugglers from Mexico, or by smugglers from Canada after being pressed into counterfeit prescription pills. ... . The U.S. Drug Enforcement Administration (DEA) suggests that some portion of fentanyl might be produced in Mexico using precursors from China. ...

China’s large and underregulated pharmaceutical and chemical industries create opportunities for anyone with access to the inputs to synthesize fentanyl or manufacture precursors. Mexican DTOs, which have a history of importing methamphetamine precursors from China, are now importing fentanyl precursors. Today, illicit fentanyl is no longer manufactured by a single producer in a clandestine laboratory. ... China’s economy, particularly its pharmaceutical and chemical industries, have grown at levels that outpace regulatory oversight, allowing suppliers to avoid regulatory scrutiny and U.S. law enforcement.

A related issue is that fentanyl and the synthetic opoids coming from China are extremely powerful, and in terms of morphine-equivalent dose--that is, MED--are much cheaper than heroin.

Synthetic opioids coming from China are much cheaper than Mexican heroin on a potency-adjusted basis ...  Recent RAND Corporation research identified multiple Chinese firms that are willing to ship 1 kg of nearly pure fentanyl to the United States for $2,000 to $5,000. In terms of the morphine-equivalent dose (MED; a common method of comparing the strength of different opioids), a 95-percent pure kg of fentanyl at $5,000 would generally equate to less than $100 per MED kg. For comparison, a 50-percent pure kg of Mexican heroin that costs $25,000 when exported to the United States would equate to at least $10,000 per MED kg. Thus, heroin appears to be at least 100 times more expensive than fentanyl in terms of MED at the import level.

Given that fentanyl and synthetic opioids are extremely cheap and powerful, transporting them becomes much simpler, even by regular mail.

Likewise, rising trade and e- commerce originating in China since 2011 facilitate the diffusion of potent synthetic opioids. Drug distribution has been further facilitated by the advent of cryptocurrencies and anonymous browsing software. ...

Fentanyl's potency-to-weight ratio makes it ideal for smuggling. A small amount of fentanyl can be easily concealed through traditional conveyances, packed in vehicles or hidden on the person. The supply of minute amounts of fentanyl through mail and private package services is profitable to someone who can redistribute it to local markets; even an ounce of fentanyl can substitute for 1 kg of heroin. ... In 2011, postal services of the United States and China entered into an agreement to streamline mail delivery and reduce shipping costs for merchandise originating in China. This “ePacket” service is designed for shipping consumer goods (under 2 kg) from China directly and rapidly to customers ordering items online ... In FY 2012, USPS handled about 27 million ePackets from China. This increased to nearly 500 million ePackets by 2017. This figure does not include items from China arriving by cargo or private consignment operators, such as DHL or FedEx. ...

For reference, if the total U.S. heroin market was on the order of 45 pure metric tons (45,000 kg; Midgette et al., 2019) before fentanyl and if fentanyl is 25 times more potent than heroin, then it would only take 1,800 1-kg parcels to supply the same amount of MEDs to meet the demand for the entire U.S. heroin market. ...

Today, shipping costs from China are negligible. A 1-kg parcel can be shipped from China to the United States for as little as $10 through the international postal system or for $100 by private consignment  operator.

Fentanyl and synthetic opioids present a number of challenges for conventional approaches to drug enforcement. For example, typical approaches assume that users of a certain drug have a demand for it, and enforcement efforts can  raising the price to reduce that demand. For those who become addicted, one can then offer treatment, or some advocate for offering zones for safer use of the drug.

But fentanyl and other synthetic opioids are different. Fentanyl is so extraordinarily cheaper than other opioids that even if additional enforcement was able to drive the price up five-fold or ten-fold, it would still be extraordinarily cheaper. It spreads not so much because users have a demand for these products. but because suppliers are cutting costs. The report says: "Indeed, many of fentanyl’s victims did not want or even know that they were using it."

Treatment for prescription opioids or heroin often recognizes that the first round of treatment may not work, but repeated efforts can eventually work for many people. But fentanyl and synthetic opioids are deadly enough that more people are going to die while these cycles of treatment are ongoing, so while such treatment may still be cost-effective, it's success rate will be lower. Here's a discussion of the experience of treatment and harm reduction programs in Vancouver, when they collided with fentanyl:

Fentanyl’s challenge to treatment and harm reduction is etched starkly in Vancouver’s death rate. Few cities have embraced treatment and harm reduction more energetically than Vancouver. Before fentanyl, that seemed to have worked well; HIV/AIDS was contained and heroin overdose death rates in British Columbia fell from an average of eight per 100,000 people from 1993 to 1999 to five per 100,000 from 2000 to 2012. However, those policies, programs, and services have been challenged by fentanyl. British Columbia now has one of the highest opioid-related death rates (more than 30 per 100,000 in 2017 and 2018), which is higher than that in all but five U.S. jurisdictions. The rate in Vancouver’s health service delivery area is even higher (55 per 100,000 people). These death rates are high, not only relative to opioid overdose deaths elsewhere but also in absolute terms. It is hard for many people who are not epidemiologists to understand whether death rates of 30 or 55 per 100,000 are large or small, so it might be useful to contrast them with death rates in the United States from homicide (4.8 per 100,000) and traffic crashes (12.3 per 100,000), which are familiar, widely discussed, and often pertain to premature deaths of people.

Of course, those harm-reduction policies could be saving many lives. Presumably, death rates would be higher if not for those efforts. However, the current approach fails to cope with fentanyl or heroin in absolute terms.

The potential implications for public policy are worth considering. The report discusses one possible scenario in this way:

Over the long term, it is important to acknowledge that a new era could be coming when synthetic opioids are so cheap and ubiquitous that supply control will become less cost-effective. Falling prices and a pivot to treatment and harm reduction need not be an unhappy scenario for law enforcement. Freeing law enforcement of the obligation to squelch supply across the board could allow it to focus on the most-noxious dealers and organizations and strive to minimize violence and corruption per kilogram delivered, rather than the number of kilograms supplied. In a way, this would let law enforcement focus on public safety, rather than an addiction prevention mission. Also ... falling prices might reduce the amount of economic-compulsive crime committed as a means to finance drug purchase.

Previous outbreaks of the use of fentanyl and synthetic opioids going back to the 1980s had a very small number of producers and a limited distribution system, so once law enforcement shut down the producer, it was over. When it comes to trade issues with China, my own preference would be to have considerably less emphasis on tariffs for legal goods, and considerably more emphasis on coordinated efforts to shut down illegal production of synthetic opioids. But collaboration between the US and China is out of favor, and even if it could be done, the knowledge of how to make and sell fentanyl and synthetic opioids is now out there in a globalizing world economy. Stuffing that evil genie back in its bottle will be very difficult.

At present, the harms of the US opioid crisis are somewhat concentrated geographically:


[T]he ten states with the highest synthetic opioid overdose death rates in 2017 are, in order: West Virginia, Ohio, New Hampshire, Maryland, Massachusetts, Maine, Connecticut, Rhode Island, Delaware, and Kentucky. ... Although these ten states constituted 12 percent of the country’s population, they made up 35 percent of the 28,500 fatal overdoses involving synthetic opioids in 2017. Ohio’s share of fatalities alone was almost 12.5 percent, while the state made up about 3.5 percent of the country’s total population.

An alarming implication here is that if synthetic opioids break out of these 10 states and have a similar effect elsewhere, the already awful death toll could multiply.
For some earlier posts that (as usual) include links to other writing on the subject, see: