Air pollution ranks fifth among global risk factors for mortality, exceeded only by behavioral and metabolic factors: poor diet, high blood pressure, tobacco exposure, and high blood sugar. It is the leading environmental risk factor, far surpassing other environmental risks that have often been the focus of public health measures in the past, such as unsafe water and lack of sanitation. ... Air pollution collectively reduced life expectancy by 1 year and 8 months on average worldwide, a global impact rivaling that of smoking. This means a child born today will die 20 months sooner, on average, than would be expected in the absence of air pollution.

The report is written by the Health Effects Institute, a Boston-based think tank, and the Institute for Health Metrics and Evaluation, an independent health research center based at the University of Washington.  The report focuses on three aspects of air pollution, with occasional references to other measures: "fine particle pollution— airborne particulate matter measuring less than 2.5 micrometers in aerodynamic diameter, commonly referred to as PM2.5; ground-level (tropospheric) ozone; and household air pollution that arises when "people burn solid fuels (such as coal, wood, charcoal, dung, and other forms of biomass, like crop waste) to cook food and to heat and light their homes."

Here's a map showing patterns of particulate pollution around the world. Clearly, the severity of this issue is worst in a band running from Africa across the Middle East to south and east Asia. 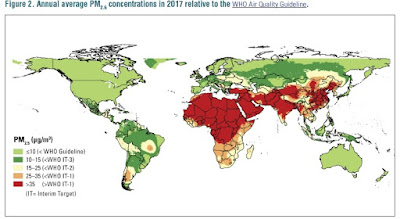 When it comes to ozone:

Most ground-level ozone pollution is produced by human activities (for example, industrial processes and transportation) that emit chemical precursors (principally, volatile organic compounds and nitrogen oxides) to the atmosphere, where they react in the presence of sunlight to form ozone. Exposure to ground-level ozone increases a person’s likelihood of dying from respiratory disease, specifically chronic obstructive pulmonary disease. ...

The pattern of ozone exposures by level of sociodemographic development differs markedly from the patterns seen with PM2.5 and household air pollution. The more developed regions, like North America, also continue to experience high ozone exposures in the world, despite extensive and successful air quality control for ozone-related emissions in many of these countries.

On the topic of household air pollution: 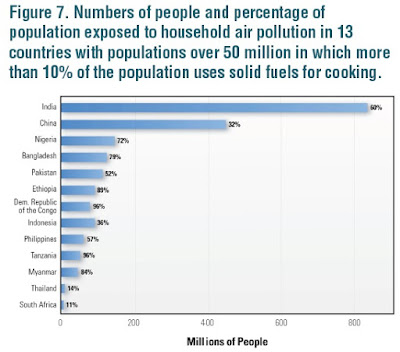 The world is making progress in some areas in reducing air pollution, like in China:


A separate analysis of air  quality and related health impacts in  74 Chinese cities recently found that annual average PM2.5 concentrations  fell by one-third from 2013–2017, a  significant achievement. The study also showed a 54% reduction in sulfur dioxide concentrations and a  28% drop in carbon monoxide.  However, challenges remain. In 2017, ... approximately 852,000 deaths were attributable to PM2.5 exposures in China. Ozone  exposures have also remained largely untouched  by the actions taken in China to date, and the GBD [Global Burden of Disease] project attributed an additional  178,000 chronic respiratory disease–related  deaths in China in 2017 to ozone.

In the US, steady progress has been made over several decades in reducing the "criteria" air pollutants-- Carbon Monoxide; Lead; Nitrogen Dioxide; Ozone; Particulate Matter (PM10); Particulate Matter (PM2.5); and Sulfur Dioxide--although there has been some backsliding in the last couple of years.  Or when it comes to household air pollution: "Globally, the proportion of households relying on solid fuels for cooking dropped from about 57% in 2005 to 47% in 2017."

But with progress duly noted, we're still talking about estimates of nearly 5 million deaths per year from air pollution, with over 100,000 of those deaths happening in the United States. Moreover, as the report notes: "Air pollution takes its greatest toll on people age 50 and older, who suffer the highest burden from noncommunicable air pollution–related diseases such as heart disease, stroke, lung cancer, diabetes, and COPD [Chronic Obstructive Pulmonary Disease]." An aging society is going to experience greater health costs from pollution.

It is perhaps worth noticing that none of the health care costs here are related to climate change, nor are these health costs of air pollution a few decades or a century into the future. However, it is often true that taking taking steps to reduce these conventional air pollutants will also have the effect of reducing carbon emissions. Instead of refighting the trench warfare of the climate change policy debates, over and over again,perhaps it would make sense to emphasize the value of steps to reduce these immediate health costs--and then just accept the benefits of fewer greenhouse gas emissions as a highly desirable side-benefit.