I was hired back in 1986 to be the Managing Editor for a new academic economics journal, at the time unnamed, but which soon launched as the Journal of Economic Perspectives. The JEP is published by the American Economic Association, which back in 2011 decided--to my delight--that it would be freely available on-line, from the current issue back to the first issue. You can download it various e-reader formats, too. Here, I'll start with the Table of Contents for the just-released Fall 2019 issue, which in the Taylor household is known as issue #130. Below that are abstracts and direct links for all of the papers. I will probably blog more specifically about some of the papers in the next week or two, as well. 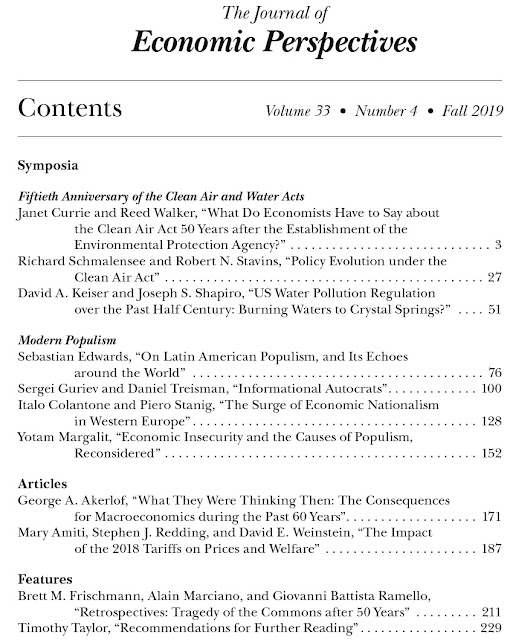 Symposium on Fiftieth Anniversary of the Clean Air and Water Acts

"What Do Economists Have to Say about the Clean Air Act 50 Years after the Establishment of the Environmental Protection Agency?" by Janet Currie and Reed Walker
Air quality in the United States has improved dramatically over the past 50 years in large part due to the introduction of the Clean Air Act and the creation of the Environmental Protection Agency to enforce it. This article is a reflection on the 50-year anniversary of the formation of the Environmental Protection Agency, describing what economic research says about the ways in which the Clean Air Act has shaped our society—in terms of costs, benefits, and important distributional concerns. We conclude with a discussion of how recent changes to both policy and technology present new opportunities for researchers in this area.
Full-Text Access | Supplementary Materials


"Policy Evolution under the Clean Air Act," by Richard Schmalensee and Robert N. Stavins
The US Clean Air Act, passed in 1970 with strong bipartisan support, was the first environmental law to give the federal government a serious regulatory role, established the architecture of the US air pollution control system, and became a model for subsequent environmental laws in the United States and globally. We outline the act's key provisions, as well as the main changes Congress has made to it over time. We assess the evolution of air pollution control policy under the Clean Air Act, with particular attention to the types of policy instruments used. We provide a generic assessment of the major types of policy instruments, and we trace and assess the historical evolution of the Environmental Protection Agency's policy instrument use, with particular focus on the increased use of market-based policy instruments, beginning in the 1970s and culminating in the 1990s. Over the past 50 years, air pollution regulation has gradually become more complex, and over the past 20 years, policy debates have become increasingly partisan and polarized, to the point that it has become impossible to amend the act or pass other legislation to address the new threat of climate change.
Full-Text Access | Supplementary Materials


"US Water Pollution Regulation over the Past Half Century: Burning Waters to Crystal Springs?" by David A. Keiser and Joseph S. Shapiro
In the half century since the founding of the US Environmental Protection Agency, public and private US sources have spent nearly $5 trillion ($2017) to provide clean rivers, lakes, and drinking water (annual spending of 0.8 percent of US GDP in most years). Yet over half of rivers and substantial shares of drinking water systems violate standards, and polls for decades have listed water pollution as Americans' number one environmental concern. We assess the history, effectiveness, and efficiency of the Clean Water Act and Safe Drinking Water Act and obtain four main conclusions. First, water pollution has fallen since these laws were passed, in part due to their interventions. Second, investments made under these laws could be more cost effective. Third, most recent studies estimate benefits of cleaning up pollution in rivers and lakes that are less than the costs, though these studies may undercount several potentially important types of benefits. Analysis finds more positive net benefits of drinking water quality investments. Fourth, economic research and teaching on water pollution are relatively uncommon, as measured by samples of publications, conference presentations, and textbooks.
Full-Text Access | Supplementary Materials

Symposium on Modern Populism
"On Latin American Populism, and Its Echoes around the World," by Sebastian Edwards
In this article, I discuss the ways in which populist experiments have evolved historically. Populists are charismatic leaders who use a fiery rhetoric to pitch the interests of "the people" against those of banks, large firms, multinational companies, the International Monetary Fund, and immigrants. Populists implement redistributive policies that violate the basic laws of economics, and in particular budget constraints. Most populist experiments go through five distinct phases that span from euphoria to collapse. Historically, the vast majority of populist episodes end up badly; incomes of the poor and middle class tend to be lower than when the experiment was launched. I argue that many of the characteristics of traditional Latin American populism are present in more recent manifestations from around the globe.
Full-Text Access | Supplementary Materials


"Informational Autocrats," by Sergei Guriev and Daniel Treisman
In recent decades, dictatorships based on mass repression have largely given way to a new model based on the manipulation of information. Instead of terrorizing citizens into submission, "informational autocrats" artificially boost their popularity by convincing the public they are competent. To do so, they use propaganda and silence informed members of the elite by co-optation or censorship. Using several sources, including a newly created dataset on authoritarian control techniques, we document a range of trends in recent autocracies consistent with this new model: a decline in violence, efforts to conceal state repression, rejection of official ideologies, imitation of democracy, a perceptions gap between the masses and the elite, and the adoption by leaders of a rhetoric of performance rather than one aimed at inspiring fear.
Full-Text Access | Supplementary Materials

"The Surge of Economic Nationalism in Western Europe," by Italo Colantone and Piero Stanig
We document the surge of economic nationalist and radical-right parties in western Europe between the early 1990s and 2016. We discuss how economic shocks contribute to explaining this political shift, looking in turn at theory and evidence on the political effects of globalization, technological change, the financial and sovereign debt crises of 2008–2009 and 2011–2013, and immigration. The main message that emerges is that failures in addressing the distributional consequences of economic shocks are a key factor behind the success of nationalist and radical-right parties. We discuss how the economic explanations compete with and complement the "cultural backlash" view. We reflect on possible future political developments, which depend on the evolving intensities of economic shocks, on the strength and persistence of adjustment costs, and on changes on the supply side of politics.
Full-Text Access | Supplementary Materials


"Economic Insecurity and the Causes of Populism, Reconsidered," Yotam Margalit
Growing conventional wisdom holds that a chief driver of the populist vote is economic insecurity. I contend that this view overstates the role of economic insecurity as an explanation in several ways. First, it conflates the significance of economic insecurity in influencing the election outcome on the margin with its significance in explaining the overall populist vote. Empirical findings indicate that the share of populist support explained by economic insecurity is modest. Second, recent evidence indicates that voters' concern with immigration—a key issue for many populist parties—is only marginally shaped by its real or perceived repercussions on their economic standing. Third, economics-centric accounts of populism treat voters' cultural concerns as largely a by-product of experiencing adverse economic change. This approach underplays the reverse process, whereby disaffection from social and cultural change drives both economic discontent and support for populism.
Full-Text Access | Supplementary Materials

"What They Were Thinking Then: The Consequences for Macroeconomics during the Past 60 Years," by George A. Akerlof
This article explores the development of Keynesian macroeconomics in its early years, and especially in the Big Bang period immediately after the publication of The General Theory. In this period, as standard macroeconomics evolved into the "Keynesian-neoclassical synthesis," its promoters discarded many of the insights of The General Theory. The paradigm that was adopted had some advantages. But its simplifications have had serious consequences—including immense regulatory inertia in response to massive changes in the financial system and unnecessarily narrow application of accelerationist considerations (regarding inflation expectations).
Full-Text Access | Supplementary Materials


"The Impact of the 2018 Tariffs on Prices and Welfare," by Mary Amiti, Stephen J. Redding and David E. Weinstein
We examine conventional approaches to evaluating the economic impact of protectionist trade policies. We illustrate these conventional approaches by applying them to the tariffs introduced by the Trump administration during 2018. In the wake of this increase in trade protection, the United States experienced substantial increases in the prices of intermediates and final goods, dramatic changes to its supply-chain network, reductions in availability of imported varieties, and the complete pass-through of the tariffs into domestic prices of imported goods. Therefore, the full incidence of the tariffs has fallen on domestic consumers and importers so far, and our estimates imply a reduction in aggregate US real income of $1.4 billion per month by the end of 2018. We see similar patterns for foreign countries that have retaliated with their own tariffs against the United States, which suggests that the trade war has also reduced the real income of these other countries.
Full-Text Access | Supplementary Materials


"Retrospectives: Tragedy of the Commons after 50 Years," by Brett M. Frischmann, Alain Marciano and Giovanni Battista Ramello
Garrett Hardin's "The Tragedy of the Commons" (1968) has been incredibly influential generally and within economics, and it remains important despite some historical and conceptual flaws. Hardin focused on the stress population growth inevitably placed on environmental resources. Unconstrained consumption of a shared resource—a pasture, a highway, a server—by individuals acting in rational pursuit of their self-interest can lead to congestion and, worse, rapid depreciation, depletion, and even destruction of the resources. Our societies face similar problems, with respect to not only environmental resources but also infrastructures, knowledge, and many other shared resources. In this article, we examine how the tragedy of the commons has fared within the economics literature and its relevance for economic and public policies today. We revisit the original piece to explain Hardin's purpose and conceptual approach. We expose two conceptual mistakes he made: conflating resource with governance and conflating open access with commons. This critical discussion leads us to the work of Elinor Ostrom, the recent Nobel Prize in Economics laureate, who spent her life working on commons. Finally, we discuss a few modern examples of commons governance of shared resources.
Full-Text Access | Supplementary Materials