It's hard to understand at an intuitive level the  difference between millions, billions, and trillions. I sometimes try to describe it this way. One million seconds in the past is about 11 days ago. One billion seconds is 11,000 days, which about 30 years ago. One trillion second is about 30,000 years ago, which would be the time period when early rock-paintings were done, when the main human inventions of the time were the oven, pottery, and twisting fibers to make rope.

Mull over that comparison with this fact: foreign exchange markets trade $6.6 trillion per day, up from $5.1 trillion per day in the previous survey. The authoritative statistics on foreign exchange markets come from the Triennial Central Bank Survey conducted by the Bank of International Settlements. The data for the latest round of the survey, completed in April 2019, is now available (September 16, 2019).

At first glance, this volume of trading seems like it must be a mistake. Total world exports of goods and services are about $25 trillion per year. Add in the investment flows across borders for 2018, which were $2 trillion in foreign direct investment, $1.9 trillion in portfolio investment, and $2 trillion in other financial transactions, mainly bank loans (according to UNCTAD). But these annual totals don't get anywhere close to the volume of for $6.6 trillion per day in foreign exchange markets.

The obvious conclusion is that most foreign exchange trading isn't about facilitating exports and imports, nor about facilitating flows of international investment. Instead, it's about financial transactions that seek to address the risks of shifts in foreign exchange rates, or to profit directly from those shifts. For example, about half the foreign exchange market is swaps contracts (that is a contract where one party is owed a certain amount in one currency, over some period of time, and another party is owed an amount in a different currency, over some different period of time, and they agree to swap these payments). 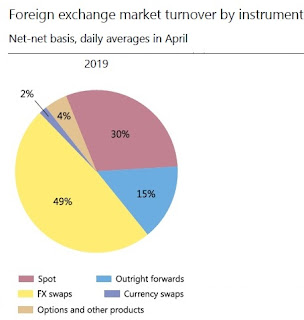 There's also an interesting insight into how foreign exchange markets work from looking at what currencies are used the most. It turns out that the US dollar is involved in 88% of all foreign exchange deals, either as the currency being sold or being bought. Again, this isn't about facilitating trade or investment related to the US economy. Instead, it's because if there is a deal happening between, say, the Brazilian real and the South African rand, the usual pattern of foreign exchange markets behind the scenes would be to convert both  currencies into US dollars, and then to convert out to the desired currency.  This pattern is one dimension of what is meant when people say that the US is the global "reserve currency." 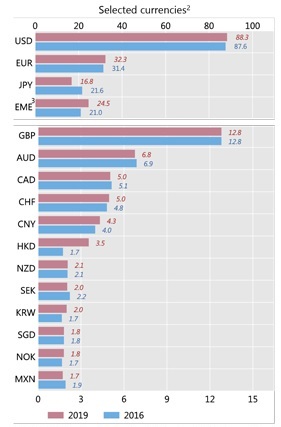 With regard to other currencies, the BIS report notes:


The US dollar retained its dominant currency status, being on one side of 88% of all trades. The share of trades with the euro on one side expanded somewhat, to 32%. By contrast, the share of trades involving the Japanese yen fell some 5 percentage points, although the yen remained the third most actively traded currency (on one side of 17% of all trades). ... As in previous surveys, currencies of emerging market economies (EMEs) again gained market share, reaching 25% of overall global turnover. Turnover in the renminbi, however, grew only slightly faster than the aggregate market, and the renminbi did not climb further in the global rankings. It remained the eighth most traded currency, with a share of 4.3%, ranking just after the Swiss franc.


Given the size and complexity of foreign exchange markets, and their potentially very rapid reaction times, it's little wonder that they often move in ways which have long been hard for economists to explain. Every now and then, I post on the bulletin board beside my office a quotation from Kenneth Kasa back in 1995: "If you asked a random sample of economists to name the three most difficult questions confronting mankind, the answers would probably be: (1) What is the meaning of life? (2) What is the relationship between quantum mechanics and general relativity? and (3) What's going on in the foreign exchange market. (Not necessarily in that order)."
Posted by Timothy Taylor at 9:00 AM