Some Income Tax Data on the Top Incomes

How much income do US taxpayers have at the very top? How much do they pay in taxes? The IRS has just published updated date for 2017 on "Individual Income Tax Rates and Tax Shares."  Here, I'll focus on data for 2017 and "returns with Modified Taxable Income," which for 2017 basically means the same thing as returns with taxable income. Here are a couple of tables for 2017 derived from the IRS data. 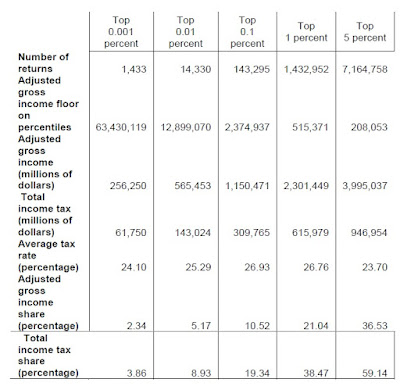 Here's a follow-up table showing the same information, but for groups ranging from the top 1% to the top 50%. 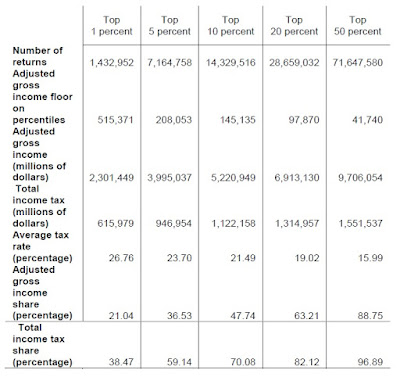 Of course, readers can search through these tables for what is of most interest to them. But here are af few quick thoughts of my own.

1) Those at the very tip-top of the income distribution, like the top .001% or the top .01%, pay a slightly lower share of income in federal income taxes than say, the top 1%. Why? I think it's because those at the very top are often receiving a large share of their annual income in the form of  capital gains, which are taxed at a lower rate than regular income.

2) It's useful to remember that many of those at the very tip-top are not there every year. It's not like the fall into poverty the next year, of course. But they are often making a decision about when to turn capital gains into taxable income, and they are people who--along with their well-paid tax lawyers-- have some control over the timing of that decision and how the income will be received.

3) The average tax rate shown here is not the marginal tax bracket. The top federal tax bracket is 37% (setting aside issues of payroll taxes for Medicare and how certain phase-outs work as income rises). But that marginal tax rate applies only to an additional dollar of regular income earned. With deductions, credits, exemptions, and capital gains taken into account, the average rate of income tax a as a share of total income is lower.

5) This data is about income in 2017. It's not about wealth, which is accumulated over time. Thus, this data is relevant for discussions of changing income tax rates, but not especially relevant for talking about a wealth tax.

6) There's a certain mindset which looks at, say, the $2.3 trillion in total income for the top 1%, and notes that the group is "only" paying $615 billion in federal income taxes, and immediately starts thinking about how the federal government could collect a few hundred billion dollars more from that group, and planning how to spend that money. Or one might focus further up, like the 14,330 in the top .01%  who had more than $12.8 million in income in 2017. Total income for this group was $565 billion, and they "only" paid about 25% of it in federal income taxes. Surely they could chip in another $100 billion or so? On average, that's only about $7 million apiece in additional taxes for those in the top .01%. No big deal. Raising taxes on other people is so easy.

I'm not someone who spends much time weeping about the financial plight of the rich, and I'm not going to start now. It's worth remembering (again) that the numbers here are only for federal income tax, so if you are in a state or city with its own income tax, as well as paying property taxes and the other taxes at various levels of government, the tax bill paid by those with high incomes is probably edging north of 40% of total income in a number of jurisdictions.

But let's set aside the question of whether the very rich can afford somewhat higher federal income taxes (spoiler alert: they can), and focus instead on the total amounts of money available. The numbers here suggest that somewhat higher income taxes at the very top could conceivably bring in a few hundred billion dollars, even after accounting for the ability of those with very high income to alter the timing and form of the income they receive. To put this amount in  perspective, the federal budget deficit is now running at about $800 billion per year.  To put it another way, it seems implausible to me that plausibly higher taxes limited to those with the highest incomes would raise enough to get the budget deficit down to zero, much less to bridge the existing long-term funding gaps for Social Security or Medicare, oi to support grandiose spending programs in the trillions of dollars for other purposes. Raising federal income taxes at the very top may be a useful step, but it's not a magic wand that can pay for every wish list.
Posted by Timothy Taylor at 9:06 AM