Africa's Prospects: Half Full or Half Empty?

There has been a flurry of articles recently with optimistic economic news about sub-Saharan Africa. For example, the December 3 issue of the Economist featured "Africa’s hopeful economies--The sun shines bright--The continent’s impressive growth looks likely to continue."  The December 2011 issue of the IMF publication Finance & Development has a group of articles about Africa; for example, an article by Calestous Juma titled "Africa's New Engine: Africa looks to its middle-class consumers to drive prosperity." These articles draw to some extent on a September 2011 report from the African Development Bank: "Africa in 50 Years Time: The Road Towards Inclusive Growth."

Good economic news about Africa has been hard to come by these last few decades, but in the last 5-10 years, there have been some encouraging signs. For example, I posted last June 13 on how Africa was making up a growing share of international trade in Africa's Economic Development, and on September 19 about Africa's Growing Middle Class (!?!). I'll re-cap here some of the optimistic news, but buried a little deeper in these reports is some gloomy reality, too.


Here's the Economist: "From Ghana in the west to Mozambique in the south, Africa’s economies are consistently growing faster than those of almost any other region of the world. At least a dozen have expanded by more than 6% a year for six or more years. Ethiopia will grow by 7.5% this year, without a drop of oil to export. Once a byword for famine, it is now the world’s tenth-largest producer of livestock. ... Severe income disparities persist through much of the continent; but a genuine middle class is emerging. According to Standard Bank, which operates throughout Africa, 60m African households have annual incomes greater than $3,000 at market exchange rates. By 2015, that number is expected to reach 100m—almost the same as in India now. These households belong to what might be called the consumer class."

Here's Juma in F&D: "Cell phone use has grown faster in Africa than in any other region of the world since 2003, according to the United Nations Conference on Trade and Development. Africa became the world’s second most connected region after Asia in late 2011, with 616 million mobile subscribers, according to U.K.-based Informa Telecoms & Media. Of course, South Africa—the most developed nation—still has the highest penetration, but across Africa, countries have leapfrogged technology, bringing innovation and connectivity even to remote parts of the continent, opening up mobile banking and changing the way business is done. Seeing the cell phone success, banking and retail firms are eyeing expansion in Africa to target a growing middle class of consumers."

Unlike many areas of the world with aging populations, Africa is on the brink of a "demographic dividend" of rising numbers of prime-age workers. The last few decades have seen real strides in health and education. The region is urbanizing. The business climate is improving. It has vast quantities of natural resources and 60% of the world's undeveloped arable land. Africa's economies have strong and developing connections to China and to India, with their rapid growth rates. Africa's diaspora outside the continent of 30 million or so sends back something like $60 billion per year to the region--along with connections to other markets and skills. Capital inflows to the region are rising and now substantially outstrip foreign aid to the region: here's a figure from the Economist: 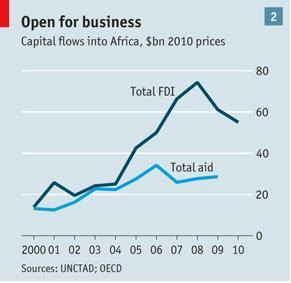 The Economist cites a World Bank report from last March, "Africa’s Future and the World Bank’s

Support to It," which says: "Putting these factors together, the Bank concludes that Africa could be on the brink of an economic take-off, much like China was 30 years ago, and India 20 years ago."

Good economic news about Africa's economic development  is welcome, and it may be churlish--or a sign of short days and looming Minnesota winter--to look at the gloomier side. But Africa's current growth projections, although they are presented in an optimistic tone, still mean odiously high levels of severe poverty even a half-century from now. Juma writes: "Poverty will be a fact of life for a long time: one-third of all Africans will still be extremely poor in 2060, living on less than $1.25 a day, according to the AfDB." The African Development Bank writes: "A dramatic decline in Africa’s poverty would require the continent to grow at an average of 7%. These projections fall short of that level. And there are still serious risks ahead to Africa’s growth path."


Developing Africa's possibilities for trade will require infrastructure investment, perhaps $500 billion over the next decade.  Paul Collier writes about the possibilities for African railroads in F&D: "The continent is a huge landmass, well suited to railroads. Yet during the past half-century Africa’s rail network, never very extensive, has shrunk. Even the United States, a huge landmass with relatively low population density, has one kilometer of track for every 43 square kilometers of land. By contrast, Nigeria, home to one-fifth of the population of sub-Saharan Africa and one of its most densely populated countries, has but one kilometer of rail for every 262 square kilometers. Nigeria is not atypical: by radically reducing transportation costs, railways could open up vast tracts of Africa to economic opportunities, especially in agriculture and mining, which many countries are relying on for future growth. The continent needs a decade of massive investment in rail networks. Railways are hardly technologically challenging. They represent the oldest continuous industrial technology. Africa’s lack of railways compared with other regions is primarily a consequence of politics." But as Collier points out, rail in Africa would need to cross many national borders, which raises questions of who will invest, how the railroad would be governed, and how it would be priced.

Electricity is another infrastructure need. Here's the African Development Bank: "Africa’s electrification rate
as at 2009 was estimated at 42%, with coverage of 69% and 25% for urban and rural areas, respectively.
Available projections for electrification rates indicate a steadily rising trend in the coming three decades to a
rate of 51% in 2030." Investment in this area also raises questions of electrical generation and distribution systems that would cross multiple national borders. The AfDB again: "Africa’s road infrastructure development is quite low in quantity, quality and access. Under 20 percent of roads are currently paved, and a study by the World Bank found that a significant share of the road networks built in the 1970s and 80s were in poor condition due to lack of maintenance."
African agriculture has been in reverse. Here's Juma: "There is also vast untapped potential for African agriculture, which has actually regressed. World food production has increased by 145 percent since 1960, but sub-Saharan African food production is 10 percent lower today than it was 50 years ago, largely as a result of underinvestment in agriculture. For example, fertilizer use is strikingly low—only 13 kilograms a hectare in sub-Saharan Africa compared with 71 kilograms in northern Africa. Only 24 percent of cereal production uses improved seeds compared with 85 percent in eastern Asia. The lack of nutrient input has led to a dramatic depletion of soil quality; 75 percent of farmland in sub-Saharan Africa has been degraded by overuse. Only about 4 percent of Africa’s crops are irrigated, compared with about 40 percent in south Asia, which leaves sub-Saharan Africa vulnerable to fluctuations in world food prices."

Of course, one can look at these issues of investment and infrastructure not as problems, but as potential opportunities to accelerate Africa's growth. The current 50-year projections, although they sound optimistic, don't offer enough progress for me. Here's a graph from the African Development Bank. The top line, with the tan diamonds, shows a decline in extreme poverty for those living on less than $1.25 per day, but it would still be one-third of Africa's population in 50 years. The bottom line with green squares shows a second poverty line: those living on between $1.25 and $2 per day. This would still be another 10% of Africa's population 50 years from now. Yes, the line with diamonds, showing the "middle class" living on $4-$20 per day is rising. But my eyes just keep returning to the two poverty lines and their distressingly high predictions even 50 years from now.