One reason underlying the Great Recession that followed the financial crash is that U.S. households had over-committed themselves with excessive borrowing. As households were faced with the task of paying off these debts and reducing their debt burdens, they weren't consuming as much as they otherwise would have done--which slowed the economy.

This pattern can be tracked with a couple of statistics that the Federal Reserve calls the "debt service ratio" and the "financial obligations ratio." The terms are defined in this way: "The household debt service ratio (DSR) is an estimate of the ratio of debt payments to disposable personal income. Debt payments consist of the estimated required payments on outstanding mortgage and consumer debt. The financial obligations ratio (FOR) adds automobile lease payments, rental payments on tenant-occupied property, homeowners' insurance, and property tax payments to the debt service ratio."

Here's the household debt service ratio, as generated by the ever-useful FRED website at the St. Louis Fed: 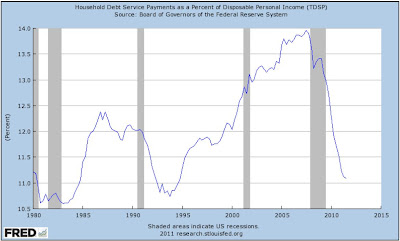 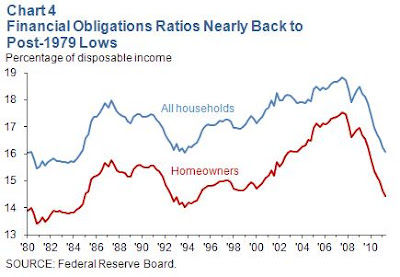 It's clearly good news that U.S. households as a group have largely worked through the problem of dealing with their oversized debt obligations. However, this success in reducing debt service and financial obligations remains a bit fragile. These obligations have two major ingredients: how much debt you have, and the interest rate you are paying on that debt. As Koch and Cooke explain: "

"Debt-to-income ratios are still elevated; they have been receding, but some of this improvement can be attributed to lenders writing down mortgage debt at unusually high levels. Improvements in household debt burdens positively impact consumer spending by affecting both housing-related consumption and—via net wealth and liquidity effects—overall consumption. In the same vein, financial obligations ratios (FOR) suggest de-levering may be nearing an end, with these ratios nearly back to post-1979 lows (Chart 4). The decline reflects increased write-downs on and paying off of mortgage debt, amplified by lower interest rates across the maturity spectrum."

In short, household debt levels are still "elevated," but household financial obligations are nonetheless low because of the ultra-low interest rates in the U.S. economy. The low interest rates are, in a way, buying some time for U.S. households to continue reducing their debt burdens.