Income inequality has been growing in most high-income countries around the world. How much do the redistribution policies of government hold down this growth in inequality? The OECD has published Divided We Stand: Why Inequality Keeps Rising. (The report can be read for free on-line with a slightly clunky browser, and a PDF of an "Overview" chapter can be downloaded.) Chapter 7 of the report discusses "Changes in Redistribution in OECD Countries Over Two Decades," which basically means from the mid-1980s to the mid-2000s. The chapter draws on a longer background paper that is freely available on-line: Herwig Immervoll and Linda Richardson's paper, "Redistribution Policy and Inequality Reduction in OECD Countries: What Has Changed in Two Decades?"


The United States does relatively little redistribution in comparison with other OECD countries. This graph from the "Overview" of the OECD report compares the inequality of market incomes to the inequality of disposable income after taxes and benefit payments. Inequality is measured by a Gini coefficient. For a more detailed explanation of how this is measured, see my November 1 post on Lorenz curves and Gini coefficients. But as a quick overview, it suffices to know that a Gini coefficient measures inequality on a scale from zero to 1, where zero is perfect equality where everyone has exactly the same income and 1 is perfect inequality where one person has all the income. The United States has one of the most unequal distributions of market income and of disposable income, and in this comparison group, U.S. policy does relatively little to reduce the disparity. The OECD writes: "Public cash transfers, as well as income taxes and social security contributions, played a major role in all OECD countries in reducing market-income inequality. Together, they
were estimated to reduce inequality among the working-age population (measured by the Gini coefficient) by an average of about one-quarter across OECD countries. This redistributive effect was larger in the Nordic countries, Belgium and Germany, but well below average in Chile, Iceland, Korea, Switzerland and the United States (Figure 9). 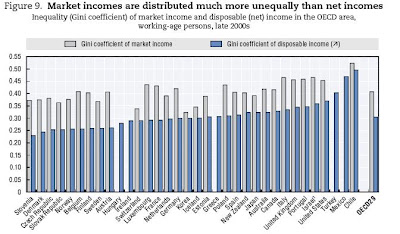 Any economy that has a progressive tax code and benefits for those with low incomes will find that as inequality increases, redistribution will also increase automatically as a result of these preexisting policies Some countries may also take additional steps, when faced with rising inequality of market incomes, to raise the amount of redistribution. A table in Ch. 7 of the OECD report calculates how much of the increase in increase in market incomes from the mid-1980s to the mid-2000s was offset by a rise in redistribution.

It's useful to look at redistribution policies both from the tax side and the benefits side. The striking theme that emerges is that in most countries, benefits for those with low incomes are much more important in reducing inequality than are progressive tax rates.

On the tax side, the U.S. tax code is already highly progressive compared with these other countries. The OECD published at 2008 report called "Growing Unequal: Income Distribution and Poverty in OECD Countries, which states (pp. 104-106): "Taxation is most progressively distributed in the United States, probably reflecting the greater role played there by refundable tax credits, such as the Earned Income Tax Credit and the Child Tax Credit. ... Based on the concentration coefficient of household taxes, the United States has the most progressive tax system and collects the largest share of taxes from the richest 10% of the population. However, the richest decile in the United States has one of the highest shares of market income of any OECD country.After standardising for this underlying inequality ... Australia and the United States collect the most tax from people in the top decile relative to the share of market income that they earn."

This finding is surprising to a lot of Americans, who have a sort of instinctive feeling that Europeans must be taxing the rich far more heavily. But remember that European countries rely much more on value-added taxes (a sort of national sales tax collected from producers) and on high energy taxes. They also often have very high payroll taxes to finance retirement programs. These kinds of taxes place a heavier burden on those with lower incomes.

In addition, top income tax rates all over the world have come down in recent decades, and the U.S. top rate is near a fairly common level. From the "Overview: "Top rates of personal income tax, which were in the order of 60-70% in major OECD countries, fell to around 40% on average by the late 2000s." From the
Immervoll and Richardson working paper: "Reductions in top [personal income tax] rates were steepest in Japan (from 70 to 37 percent), Italy (65 to 43), United Kingdom (60 to 40), and France (65 to 48). The flattening of schedules mostly concerned higher income ranges (Australia, Austria, Finland, France, Germany, Japan, United Kingdom, United States)."


The real difference in how much redistribution affects inequality arises from differences in benefits. The OECD writes: "Benefits had a much stronger impact on inequality than the other main instruments of cash distribution -- social contributions or taxes. ... The most important benefit-related determining factor in overall distribution, however, was not benefit levels but the number of people entitled to transfers." This theme applies to a number of benefit programs, including disability payments. But here is an illustrations with regard to unemployment insurance, taken from the Immervoll and Richardson working paper. They write: "Figure 11 indicates that the shares of unemployed reporting benefit receipt have dropped in a majority (two thirds) of the countries shown, while only a few recorded significant increases." Notice that the share of the unemployed in the U.S. who get unemployment benefits is on the low end of the spectrum. 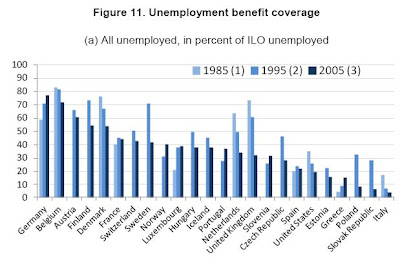 This pattern also fits with my post on November 1 about a Congressional Budget Office report which found that Federal Redistribution is Dropping. It pointed out that the share of federal redistribution spending programs going to the elderly has been steadily rising, while the share going to the non-elderly poor and near-poor has not been rising. The working paper also notes: "[O]ver time, almost all countries devoted declining shares of total spending to cash benefits that mostly benefit children and working-age individuals."

The OECD report been criticized for suggesting that higher taxes on those with the very highest incomes might be worth considering, but this is certainly not the main focus of the report. Indeed, given that the U.S. tax system is already one of the most progressive, this recommendation seems aimed more at other countries than at the United States. The "Overview" of the OECD report states: "However, redistribution strategies based on government transfers and taxes alone would be neither effective nor financially sustainable. First, there may be counterproductive disincentive effects if benefit and tax reforms are not well designed. Second, most OECD countries currently operate under a reduced fiscal space which exerts strong pressure to curb public social spending and raise taxes. Growing employment may contribute to sustainable cuts in income inequality, provided the employment gains occur in jobs that offer career prospects. Policies for more and better jobs are more important than ever." In particular, the OECD report emphasizes as policy tools to fight unemployment job-related training and education, continuing education over the work life, and reforming rules prevalent in many countries that separate the workforce into temporary and permanent employment contracts.

As part of an overall plan to get the budget deficit under control, and given the rise in inequality over recent decades, I would be favor a somewhat higher marginal tax rate on those with very high income levels. But it seems to me that U.S. political discourse has focuses way too much on taxing the rich. Hard-core Democrats and Republicans both like the familiar arguments over taxes: it gets their blood pumping and their base motivated. But U.S. political discourse has far too little about reforming labor markets to open up more jobs, or about how to stimulate job-related education for life. And neither party stands up for raising government spending in ways that would affect those with lower income levels more, whether through income payments to families (especially to the working poor) or through spending on public goods like neighborhood safety (police, lighting and activities), parks and libraries, or education and public health that would have a greater effect on the quality of life for those with lower incomes.