Government policies toward unemployment fall into two categories: passive and active. Passive policies are those like unemployment benefits or early retirement. They tide over the affected workers until the next job, or until retirement, but accomplish little else. Active policies are those like government support for job training, job search, incentives for private firms to hire, or even direct job creation. The U.S. spends less of either kinds of labor market policy than most developed economies. Here, I'll draw on a recent essay by Jun Nie and Ethan Struby from the Kansas City Fed: "Would Active Labor Market Policies Help Combat High U.S. Unemployment?"

Let's set the stage with some basic facts about much developed economies typically spend on active and passive labor market policies. Here's a bar graph from Nie and Struby showing the average levels over the 1998-2008 period for both categories of labor market spending for 21 countries. 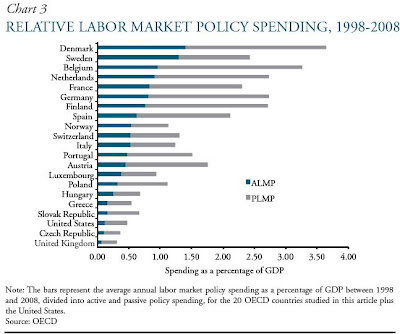 Nie and Struby offer an alternative metric: Instead of looking at spending as a share of GDP, look at expenditures per unemployed worker. Moreover, measure those expenditures as a percentage of per capita GDP. By this measure, U.S. spending on passive labor market policies is half as large as the average for other developed economies, while U.S. spending on active labor market parties is a bit more than a quarter of the average for other developed economies. They write:

How well do active labor market policies work? Nie and Struby offer a reasonable first take on this question, but it should be noted that here we are departing the world of basic facts about categories of spending levels, and entering the world of estimation. Details of the their calculations are in the article. Here, I'll just say that they look at the spending by these 21 countries with active and passive labor policies over the 1998-2008 period, and they break down these policies into various subcategories. They look at how unemployment rates fluctuate in those countries. They also adjust for a bunch of other variables: the labor force participation rate, union density, laws about employment protection, tax rates, whether the economy is in recession, level and duration of unemployment benefits, and "fixed effects" that are supposed to account for country-specific factors like cultural, geographical. and political differences.

Again, this is all a reasonable starting point, but as the authors are careful to note, the the "results should be read cautiously." This calculation has lots of correlations, but causation is less clear. Extrapolating from average experience in some countries at one time to a particular country at another time is always somewhat questionable.

With warning flags duly posted, the results of their calculations are intriguing. They find that among the active labor market policies, expansions in job training opportunities and assistance with job search are the least expensive ways to encourage more employment, and that these methods pass a rudimentary cost-benefit test. They also find that employment incentives and direct government support for employment are much costlier and under at least some sets of plausible assumptions, don't pass a cost-benefit test.

To me, this all adds up to a tentative but plausible case for more government spending on job training programs and on support for job search. The U.S. traditionally hasn't done much for its unemployed--neither passive nor active support--as compared with other countries. But with U.S. unemployment high, in an economy where lifelong learning and movement between economic opportunities is ever more important, these seem like potentially useful steps.A focused program of widespread state-level and local-level experimentation with these policies, together with studying the experience of other countries, could lead to policies that are useful for U.S. labor markets both in the next few years and in the long-run.

Finally, although the authors don't make this point, the two active labor market policies that they find useful--assistance for job training and for job search--both focus directly on the unemployed. The two programs they don't find useful--employment incentives and government support for employment--both focus on the potential employers, and seem much more susceptible to gaming the system, and to politicized and pork-barrel spending.