Will Asia come to dominate the global economy during the 21st century? The Asian Development Bank published a thoughtful report on the subject in August called "Asia 2050: Realizing the Asian Century." The Executive Summary is available here; the full report is available by searching the web. Despite the triumphalist-sounding title, the report actually has a cautionary focus.

"The rapid rise of Asia over the past 4-5 decades has been one of the most successful stories of economic development in recent times. Today, as Asia leads the world out of recession, the global economy’s center of gravity is once again shifting toward the region. The transformation underway has the potential to generate per capita income levels in Asia similar to those found in Europe today. By the middle of this century, Asia could account for half of global output, trade, and investment, while also enjoying widespread affluence.

While the realization of this promising outcome—referred to as the “Asian Century”—is plausible, Asia’s rise is by no means pre-ordained. Given Asia’s diversity and complexity, this rapid rise offers both important opportunities and significant challenges. In its march towards prosperity and a region free of poverty, Asia will need to sustain high growth rates, address widening inequities, and mitigate environmental degradation in the race for resources. In addition, Asian economies must avoid the middle income trap in order to realize the Asian Century."

As a starting point, the report offered a useful simplification for thinking about the huge region of Asia. Seven countries in Asia have roughly three-quarters of the region's population, and about 90% of the region's GDP. So in thinking about prospects for the the Asian region, one can reasonably focus on China India, Indonesia, Japan, the Republic of Korea, Thailand and Malaysia.

In the "Asian century" scenario, the region of Asia will regain the position in the world economy that it last held in the 1700s--that is, the region will produce more than half of all global output. 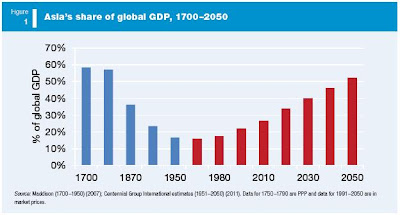 Much of the report is a lots of discussion of possible issues that could derail this pattern: governance, urbanization, an aging population in some countries, education, regional cooperation, energy, environment, others. Here, I will pick out just a couple of broad theme.

A primary concern for Asia is the "Middle Income Trap." For an illustration, consider per capita growth of Korea compared with that of South Africa and Brazil. Korea has kept per capita income generally rising, even after terrible shocks like the 1997-98 financial crisis in east Asia. In contrast, Brazil, much of Latin America, and South Africa have been stuck at more-or-less the same place for several decades. 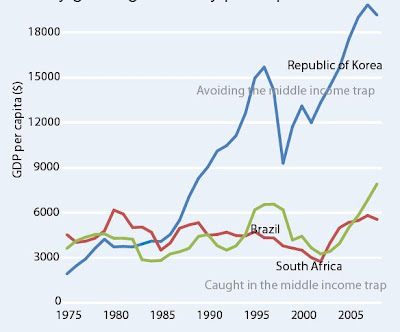 The report explains: "But many middle-income countries do not follow this pattern. Instead, they have bursts of growth followed by periods of stagnation or even decline, or are stuck at low growth rates. They are caught in the Middle Income Trap—unable to compete with low-income, low-wage economies in manufactured exports and with advanced economies in high-skill innovations. Put another way, such countries cannot make a timely transition from resource-driven growth, with low-cost labor and capital, to productivity-driven growth."

If the rising economies of Asia go follow the pattern of Latin America over most of the last 3-4 decades, then the world economy in 2050 will not look dramatically different than it does today. Instead of the Asian region producing over half the world's GDP by 2050, in this scenario it would produce just 31% of global GDP by 2050-- not far above current level. In this scenario, by 2050 the U.S. economy would be larger than the economies of China and India combined. 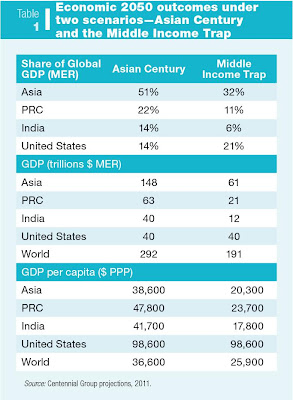 The closing words of the report are: "Asia’s future is fundamentally in its own hands." That statement is a bit evasive: referring to "its own hands" seems to imply a more unitary identity for Asia than is actually true. A great many hands will be involved in shaping the region's future. However, the statement also contains a deeper truth is worth considering. U.S. and Europe will surely influence the outcomes in Asia in modest ways, but Asia is a huge region, with huge population and huge resources. While exporting to the U.S. and western economist has jump-started growth in the region, it surely the capability at this point of generating continued growth from within.  Of course, whether that capability will be realized remains to be seen.

Given that the U.S. isn't going to determine what happens in Asia, how should it regard the possibilities?  If Asia falls into the Middle Income Trap, the U.S. can focus less on that area, both economically and politically. I personally would hope for continued economic growth in the region, because it would improve the standard of living so dramatically for several billion people. In this Asian Century scenario, the U.S. should be striving to find a way to connect its human, managerial, technological, financial, and other resources with all that vibrant economic growth, so that we can benefit from it. If the world economy is going to be pulled ahead by an Asian locomotive, the U.S. had better start figuring out how to reserve some good seats on the train.

For a previous post on this topic, see Will Emerging Economies Dominate the World Economy? from July 22, 2011. For posts in the last few months on China catching up to and perhaps surpassing the U.S. economy, see Will China Catch Up to the U.S. Economy? from June 27, 2011, and Is China's Economic Dominance in the Long Run a Sure Thing? from September 9, 2011.