Saving Jaguars and Elephants with Property Rights and Incentives

When it comes to saving endangered species, many people have the instinctive reaction that that the policy answer is to pass a law that forbids disturbing or hurting the species. Economists have long pointed out that while such a law may be a useful first step, the incentives of those who live locally to avoid hurting the animal and to protect its habitat matter a lot. If finding an endangered species on your land means that you are deprived of the use of that land, there is a counterproductive incentive, as the old saying goes, to "shoot, shovel, and shut up." In low-income countries, in particular, protecting endangered species and their habitat will require active cooperation of nearby villages and farmers.


A classic example is whether to allow hunting of elephants in Africa. Terry Anderson  and Shawn Regan provide a lively and opinionated overview last June in "Shoot an Elephant, Save a Community."

"Anti-hunting groups succeeded in getting Kenya to ban all hunting in 1977. Since then, its population of large wild animals has declined between 60 and 70 percent. The country’s elephant population declined from 167,000 in 1973 to just 16,000 in 1989. Poaching took its toll on elephants because of their damage to both cropland and people. Today Kenya wildlife officials boast a doubling of the country’s elephant population to 32,000, but nearly all are in protected national parks where poaching can be controlled. With only 8 percent of its land set aside as protected areas, it is no wonder that wildlife in general and elephants in particular have trouble finding hospitable habitat. ...


"In sharp contrast to Kenya, consider what has happened in Zimbabwe. In 1989, results-oriented groups such as the World Wildlife Fund helped implement a program known as the Communal Areas Management Programme for Indigenous Resources or CAMPFIRE. This approach devolves the rights to benefit from, dispose of, and manage natural resources to the local level, including the right to allow safari hunting. Community leaders with local knowledge about wildlife and its interface with humans help establish sustainable hunting quotas. Hunting then provides jobs for community members, compensation for crop and property damage, revenue to build schools, clinics, and water wells, and meat for villagers ... By granting local people control over wildlife resources, their incentive to protect it has strengthened. As a result, poaching has been contained and human-wildlife conflicts have been reduced. While challenges remain, especially from the current political climate in Zimbabwe, CAMPFIRE has quietly produced results with strikingly little activist rhetoric. ... Ten years after the program began, wildlife populations had increased by 50 percent. By 2003, elephant numbers had doubled from 4,000 to 8,000. The gains have not just been for wildlife, however. Between 1989 and 2001, CAMPFIRE generated more than $20 million in direct income, the vast majority of which came from hunting. During that period, the program benefitted an estimated 90,000 households and had a total economic impact of $100 million.
Wildlife imposes real costs on African communities. Those communities need the right incentives to protect wildlife and its habitat. The results go beyond the CAMPFIRE areas. Between 1989 and 2005, Zimbabwe’s total elephant population more than doubled from 37,000 to 85,000, with half living outside of national parks. Today, some put the number as high as 100,000."

A more recent example focuses less on hunting, and more on a combination of tourism and property rights as the local incentive. The October 2011 issue of Smithsonian magazine has an article about "The Jaguar Freeway: A bold plan for wildlife corridors that connect populations from Mexico to Argentina could mean the big cat's salvation."  The article discusses an effort to connect existing jaguar habitats from Mexico to Argentina with corridors in which the jaguars could travel, in an attempt to preserve their biodiversity and to prevent the animals from being confined in nature preserves. Here's a map of the plan, where the green areas are jaguar population centers, the yellow lines are corridors that are pretty likely, and the red lines are jaguar corridors at risk: 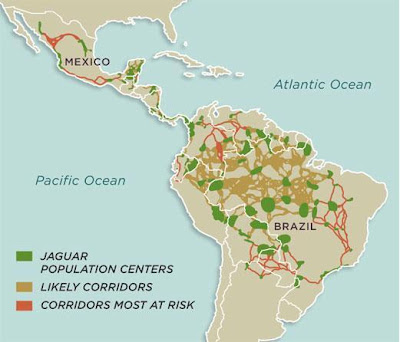 This article isn't written by or for economists, but the negotiations with government, local landowners and farmers over whether to create these jaguar corridors often refer to incentives for tourism. Here is a scattering of comments from the article:

"[I]n 1984, Belize’s Cockscomb Basin became the world’s first jaguar preserve. Now en­compassing about 200 square miles, it is part of the largest contiguous forest in Central America. Jaguars are now thriving in Belize, where ecotourism has made them more valuable alive than dead."

Here's a description of two "conservation ranches" in Brazil: "The ranches straddle two preserves, making them an important link in the corridor chain and together creating 1,500 square miles of protected habitat. ...
These ranches are expected to be more successful than others by using modern husbandry and veterinary  techniques, such as vaccinating cattle herds. Because disease and malnutrition are among the leading killers of cattle in this region, preventing those problems more than makes up for the occasional animal felled by a jaguar. “My vision was to ranch by example,” Kaplan says, “to create ranches that are more productive and profitable and yet are truly jaguar-friendly.”"

"In Belize, where jaguars serve increasingly as an attraction for ecotourists, Maya who once killed the animals are now their protectors. “It’s not born-again enlightenment,” says Rabinowitz. “It’s economics.” Jaguar tourism is also bringing money into the Pantanal [in Brazil]. Carmindo Aleixo Da Costa, a 63-year-old rancher, says that hosting a few foreign tourists doubles his annual income. “Now is the time of the jaguar!” he says, beaming."