U.S. Is Already a Net Exporter of Oil

Added 12/16
A reader emails this only slightly snarky and completely accurate note pointing out that this post is mistitled:

"Read you article in the Conversable Economist, December 2, 2011 titled "US is Already a Net Importerr of Oil". Great if it were true, but you have the facts all wrong. Before you write any more articles on the subject of oil, please learn the difference between oil and petroleum products."
Original post follows.
___________________________

"U.S. exports of gasoline, diesel and other oil-based fuels are soaring, putting the nation on track to be a net exporter of petroleum products in 2011 for the first time in 62 years." This according to Liam Pleven and Russell Gold in a November 30 Wall Street Journal story: "U.S. Nears Milestone: Net Fuel Exporter."A graph of U.S. oil imports and exports in the last 10 years tells the story. 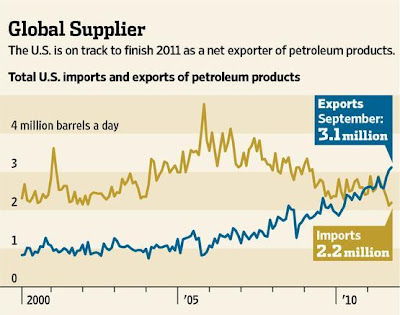 To be sure, part of the reason for this change is that demand for energy in the U.S. is down in the sluggish aftermath of the Great Recession, while demand for energy in other parts of the world is rising. For example, the U.S. is now a net exporter of oil to Brazil, Mexico, Argentina. While exports and imports will bounce around in the short-run, over the longer run it appears that the U.S. is on track to become an energy exporter of oil, coal, and even natural gas (as technology improves for shipping liquified natural gas.


At no time in my life has the U.S. been a net exporter of petroleum products, and my mind is still trying to accept that this shift is real. I'd posted back on October 7 about America as Conventional Energy Powerhouse?!? Amy Myers Jaffe, an energy expert who runs the Baker Institute Energy Forum at Rice University, wrote: "By the 2020s, the capital of energy will likely have shifted back to the Western Hemisphere, where it was prior to the ascendancy of Middle Eastern megasuppliers such as Saudi Arabia and Kuwait in the 1960s."

But it seems to me that the sensible policy response to America's new role as an energy exporter is what I've called The Drill-Baby Carbon Tax: A Grand Compromise on Energy Policy (October 24, 2011). As I summarized the proposal: "As the name suggests, it has two parts. On one side, there would be a national commitment to move ahead with all deliberate speed in developing the vast U.S. fossil fuel energy resources that are now technologically available. On the other side, the United States would enact a appropriate carbon tax to offset concerns over the risks of climate change. The Drill Baby Carbon Tax basically takes the view that while the United States is working on phasing down fossil fuels and moving to alternative energy resource, let's produce a greater share of the fossil fuels that we consume here at home."