Like most people in  my professional universe, I try to carry around in my head some basic facts and comparisons. Here are some basic tables and figures about the world economy, which I have edited and adapted (by leaving out some smaller countries) from the 2012 edition of "Charting International Labor Market Comparisons" published by the U.S. Bureau of Labor Statistics.

As a starting point, make a mental list of the large economies in the world--say, those with GDP larger than $1 trillion. Here's a figure listing them, where GDP calculated in 2010 U.S. dollars using purchasing power parity exchange rates. For most people, it's not a big surprise to see the U.S. at the top, followed by China and Japan. But seeing India ahead of Germany and the United Kingdom is a bit unexpected, as is seeing Brazil ahead of Italy, Mexico ahead of Spain, and South Korea ahead of Canada. 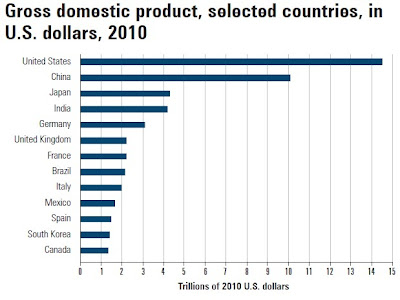 One aspect of that omnibus term "globalization" is that the U.S. economy plays a smaller role in the world economy, while China and other nations are playing a larger role. Here's a figure showing the shift in what countries are producing what share of global GDP from 1990-2010. The decline in Japan's importance is more than offset by the rise of China. The U.S. and European share of world output is falling, and the "rest of the world" share is rising. 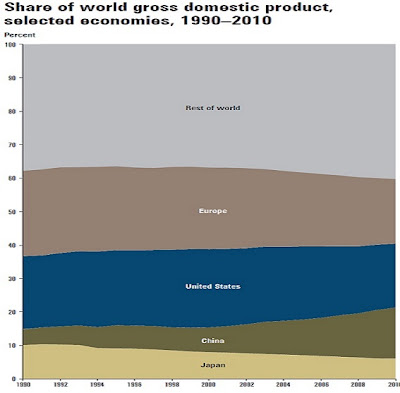 Of course, comparisons across countries don't take population differences into account. As a final test, form a mental picture of what per capita GDP or per capita GDP per worker would look like for 2010. Again, it's no shock to see the U.S. economy near the top of the list (although Norway, not shown here, is actually a little higher in both categories).  At least to me, it is a modest surprise to see the western European countries outranking Japan so decisively, and a bigger surprise to see that South Korea is now so close behind Japan. Mexico considerably exceeds Brazil, with both Latin American countries lagging behind eastern Europe. And China remains quite poor on a per capita basis. As the BLS reports: "Gross domestic product (GDP) per capita in the United States was approximately six times larger than the GDP per capita in China." Of course, this also suggests that China has the potential, with appropriate policies, for at least several decades more of very rapid economic growth. 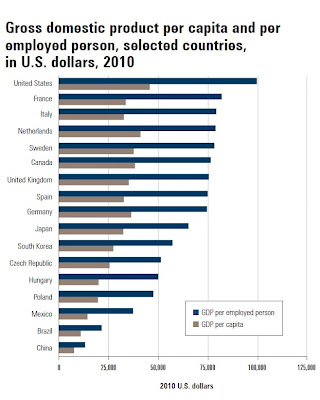