I recently ran across this historical data from the Neilson company for the time American households spend watching television, per day. 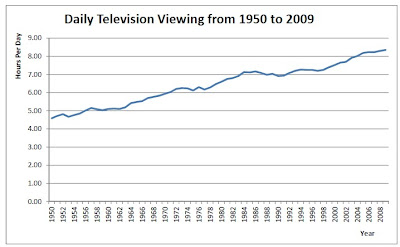 I rarely watch 8 hours of television per week, much less per day. I had a conversation the other day in which someone was incredulous that I have never seen an episode of Seinfeld, or Friends, or actually any sitcom in the last decade or so. I told them that I used to watch M*A*S*H now and then, and they looked at me with pity.

Economists sometimes quote the old proverb: "De gustibus non est disputandum." There's no arguing over taste. We tend to accept consumer tastes and preferences as given, and proceed from there. I suppose that those of us who blog, and then hope for readers, can't really complain about those who spend time looking at a screen. I certainly have my own personal time-wasters, like reading an inordinate number of mysteries. I assume that for many people the television is on in the background of other activities. But at some deep level, I just don't understand averaging 8 hours of television per day. I always remember the long-ago jibe from the old radio comedian Fred Allen: "Television is a medium because anything well done is rare."

Note: Thanks to Danlu Hu for downloading the data and creating this figure.