I try to work from home a couple of days each week: it saves me the commuting time, and I can be home when the children get off the school-bus in the afternoon. Thus, I'm also intimately aware of the temptations of working from home, like a sudden overpowering urge to re-arrange the living room furniture or to bake a batch of cookies. In its report on "Home-Based Workers in the United States: 2010," a group of U.S. Census Bureau analysts (Peter J. Mateyka, Melanie A. Rapino, and Liana Christin Landivar) steer clear of the gains and losses from working at home, and lay out the statistics on how widespread the practice is. The underlying data comes from two sources that are not directly comparable, because they ask about home-based work in somewhat different ways: the Survey of Income and Program Participation (SIPP) and the American Community Survey (ACS). That said, here are a few facts that jumped out at me.

Those who work at home part of the time and at a workplace part of the time typically have higher incomes either than those who are at a workplace all the time or those who are at home all the time. "Median personal earnings for mixed workers were significantly higher ($52,800) compared with onsite ($30,000) and home ($25,500) workers. While home workers had lower personal earnings than onsite workers did, respondents that reported working at least 1 day at home had significantly higher household incomes than respondents that reported working only onsite." 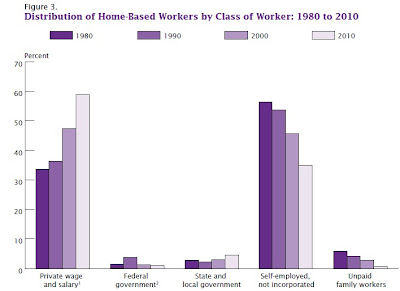 Those "mixed" workers who are partly at home and partly at the office are more likely to work at home on Mondays and Fridays (a fact that seems to me creates some suspicion about how much work is actually getting done). "About 90 percent of home workers reported working
Monday through Friday at home, compared with less than 40 percent of mixed workers. The most
popular days worked at home for mixed workers were Monday (37.6 percent) and Friday (37.8 percent) ..."

The top three cities for home-based work are Boulder, CO, Medford, OR, and Santa Fe, NM. Two of the top ten areas are in my home state of Minnesota--small cities with a branch of the state university system about an hour's drive from Minneapolis and St. Paul. 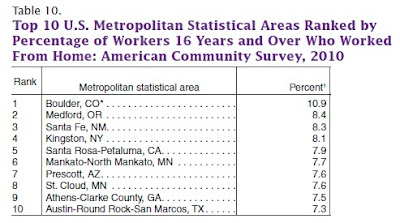