How has this change altered actual retirement patterns? What are the reasons, either for retirees or for the finances of Social Security, to encourage still-later retirement?


Economists have long recognized that what a government designates as the "normal" retirement age has a big effect on when people actually choose to retire. Luc Behaghel and David M. Blau present some of the recent evidence in "Framing Social Security Reform: Behavioral Responses
to Changes in the Full Retirement Age," which appears in the November 2012 American Economic Journal: Economic Policy (4(4): 41–67). (The journal isn't freely available on-line, but many in academia will have access through a library subscription.) 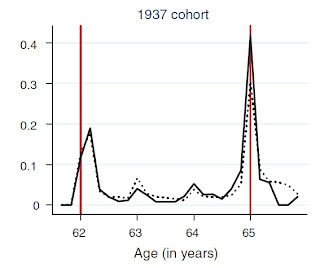 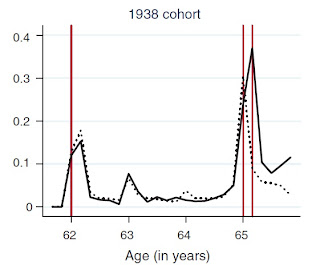 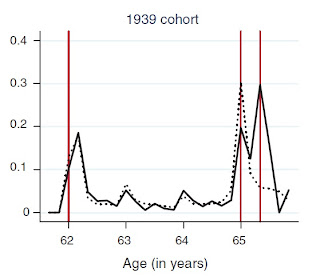 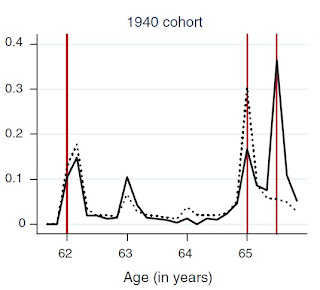 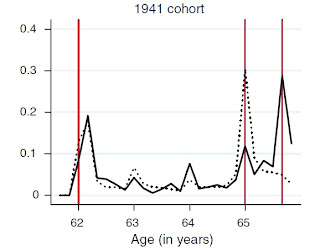 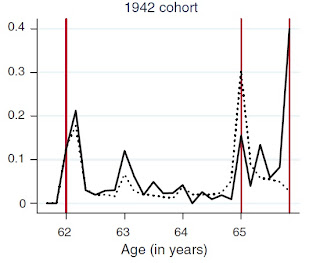 The evidence here seems clear: People are making their retirement choices in synch with the government-set normal retirement age. This pattern isn't new, as the authors point out, a spike in retirement age at 65 became visible in the data back in the early 1940s, about five years after Social Security became law. Still, the obvious question (for an economist) is why people would make this choice. If you retire later than the normal retirement age, your monthly benefits are scaled up, so from the viewpoint of overall expected lifetime payments, you don't gain from retiring earlier. A number of possible explanations have been proposed: 1) people don't have other sources of income and need to take the retirement benefits as soon as possible for current income; 2) people are myopic, or don't recognize that their monthly benefits would be higher if they delayed retirement; 3) many people are waiting until age 65 to retire so that they can move from their employer health insurance to Medicare; 4) some company retirement plans encourage retiring at age 65.

However, none of these explanations give an obvious reason for why the retirement age would exactly track the changes in Social Security normal retirement age, so it seems as if a final "behavioral" explanation is that the "normal" retirement age announced by the government, whatever it is, is then treated by many people as a recommendation that should be taken. Choosing a retirement date in this way is probably suboptimal both for individuals and for the finances of the Social Security system.

From the standpoint of individuals, there's a widespread sense among economists that many retirees would benefit from having more of their wealth in annuities--that is, an amount that would pay out no matter how long they live. In the Fall 2011 issue of my own Journal of Economic Perspectives,
Shlomo Benartzi, Alessandro Previtero, and Richard H. Thaler have an article on "Annuitization Puzzles," which makes the point that when you delay receiving Social Security, you are in effect buying an annuity: that is, you are taking less in the present--which is similar to "paying" for the annuity-- in exchange for a larger long-term payment in the future. They write: "[T]he easiest way to increase the amount of annuity income that families have is to delay the age at which people start claiming Social Security benefits. Participants are first eligible to start claiming benefits at age 62, but by waiting to begin, the monthly payments increase in an actuarially fair manner until age 70. "

They further argue that a good starting point to encouraging such behavior would be to re-frame the way in which the Social Security Administration, and all the rest of us, talk about Social Security benefits. Imagine that, with no change at all in the current law, we all started talking about a "standard retirement age" of 70. We pointed out that you can retire earlier, but if you do, monthly benefits will be lower. If the choice of when to retire was framed in this way, my strong suspicion is that many more people would react differently than when we announce that the "normal retirement age" is 66, and if you wait then your monthly benefits will be higher. Again, people seem to react to what the government designates as the target for retirement age.

However, this labeling change might encourage people to work longer, but it would not affect the solvency of the Social Security system, because those who wait longer to retire are, in effect, paying for their own higher monthly benefits by delaying the receipt of those benefits. However, the Social Security actuaries offer a number of illustrative calculations on their website about possible steps to bolster the financing of the system. One proposal about phasing back the normal age of retirement looks like this:  "After the normal retirement age (NRA) reaches 67 for those age 62 in 2022, increase the NRA 2 months per year until it reaches 69 for individuals attaining age 62 in 2034. Thereafter, increase the NRA 1 month every 2 years."

Thus, this proposal would represent no change in the rules for Social Security benefits for anyone born before 1960--and thus in their early 50s at present. Under this proposal, those born after 1960 would face the gradual phase-in--but of course, they would also benefit from having a program that is much closer to fully funded. would face the same phase-in as currently exists. The actuaries estimate that this step by itself would address about 44% of the gap over the next 75 years between what Social Security has promised and the funding that is expected during that time. Given the predicted shortfalls of the Social Security system in the future, and the gains in life expectancy both in the last few decades and expected in the next few decades, and the parlous condition of large budget deficits reaching into the future, I would be open to proposals to phase in a more rapid and more sustained rise in the normal retirement age for Social Security benefits.