The theme for the 2013 World Development Report from the World Bank is one word: "Jobs." The discussion reaches usefully beyond the issue of recovery from the Great Recession (although that topic is covered as well) and looks at issues of job creation in the long run. At least to me, much of the underlying message is not so much about the raw numbers of jobs that need to be created, but is the idea that stable relationships between employers and employees, with shared benefits for both, are part of a broader web of social institutions and interrelationships.

"As the world struggles to emerge from the global crisis, some 200 million people—including 75 million under the age of 25—are unemployed. Many millions more, most of them women, find themselves shut out of the labor force altogether. Looking forward, over the next 15 years an additional 600 million new jobs will be needed to absorb burgeoning working-age populations, mainly in Asia and Sub-Saharan Africa. Meanwhile, almost half of all workers in developing countries are engaged in small-scale farming or self-employment, jobs that typically do not come with a steady paycheck and benefits.

The problem for most poor people in these countries is not the lack of a job or too few
hours of work; many hold more than one job and work long hours. Yet, too often, they are not earning enough to secure a better future for themselves and their children, and at times they are working in unsafe conditions and without the protection of their basic rights. Jobs are instrumental to achieving economic and social development. Beyond their critical importance for individual well-being, they lie at the heart of many broader societal objectives, such as poverty reduction, economy-wide productivity growth, and social cohesion. The development payoffs from jobs include acquiring skills, empowering women, and stabilizing post-conflict societies."

Here's a figure showing on the left  how much absolute job creation is needed in various regions of the world by 2020, given population growth, and on the left, the annual rates of job creation needed. The challenge of creating jobs with decent and growing compensation at these rates is an enormous one. 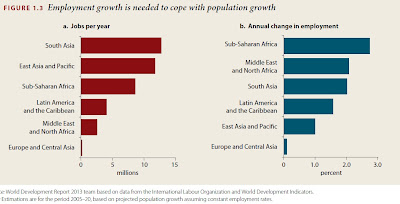 In much of the world, it's important to remember that those counted as having a "job" have neither an employer nor a regular paycheck.

"To many, a “job” brings to mind a worker with an employer and a regular paycheck. Yet, the majority of workers in the poorest countries are outside the scope of an employer-employee relationship. Worldwide, more than 3 billion people are working, but their jobs vary greatly. Some 1.65 billion are employed and receive regular wages or salaries. Another 1.5 billion work in farming and small household enterprises, or in casual or seasonal day labor. Meanwhile, 200 million people, a disproportionate share of them youth, are unemployed and actively looking for work. Almost 2 billion working-age adults, the majority of them women, are neither working nor looking for work, but an unknown number of them are eager to have a job."


As the figure shows, 70-80% of those who are have jobs in sub-Saharan Africa have nonwage employment. The figure illustrates that the prevalence of wage employment is actually closely associated with economic development, and more broadly with whether the society is one in which organizations called private firms have the ability and flexibility to create themselves and to expand.

World Bank reports always make me smile a bit when they discuss the role of the private and the public sector. My sense is that many of the readers of such reports are skeptical of free market economics. Thus, the economists at the World Bank find themselves needing to straddle the fence: on one side, they do speak up for the importance of the private sector and free markets; on the other side, they spend a lot of words pointing out that government has an important role to play, and leaving the door open for the possibility that certain government interventions might be useful. Thus, here's the report on the centrality of the private sector in creating jobs:


"[T]he private sector is the main engine of job creation and the source of almost 9 of every 10 jobs in the world. Between 1995 and 2005, the private sector accounted for 90 percent of jobs created in Brazil, and for 95 percent in the Philippines and Turkey. The most remarkable example of the expansion of employment through private sector growth is China. In 1981, private sector employment accounted for 2.3 million workers, while state-owned enterprises (SOEs) had 80 million workers. Twenty years later, the private sector accounted for 74.7 million workers, surpassing, for the first time, the 74.6 million workers in SOEs. In contrast to the global average, in some countries in the Middle East and North Africa, the state is a leading employer, a pattern that can be linked to the political economy of the postindependence period, and in some cases to the abundance of oil revenues. For a long period, public sector jobs were offered to young college graduates. But as the fiscal space for continued expansion in public sector employment shrank, “queuing” for public sector jobs became more prevalent, leading to informality, a devaluation of educational credentials, and forms of social exclusion. A fairly well-educated and young labor force remains unemployed, or underemployed,and labor productivity stagnates."


And on the other side of the fence, here's the report on the importance of government, along with implications that a great many types of government interventions in labor markets can be justified.


"While it is not the role of governments to create jobs, government functions are fundamental for sustained job creation. The quality of the civil service is critically important for development, whether it is teachers building skills, agricultural extension agents improving agricultural productivity, or urban planners designing functional cities. Temporary employment programs for the demobilization of combatants are also justified in some circumstances. But as a general rule it is the private sector that creates jobs. The role of government is to ensure that the conditions are in place for strong private-sector-led growth, to understand why there are not enough good jobs for development, and to remove or mitigate the constraints that prevent the creation of more of those jobs. Government can fulfill this role through a three-layered policy approach:
• Fundamentals....  Macroeconomic stability, an enabling business environment, human capital accumulation, and the rule of law are  among the fundamentals. ... Adequate infrastructure, access to finance, and sound regulation are key ingredients of the business environment. Good nutrition, health, and education outcomes not only improve people’s lives but also equip them for productive employment....
• Labor policies. ...  Labor policy should avoid two cliffs: the distortionary interventions that clog the creation of jobs in cities and in global value chains, and the lack of mechanisms for voice and protection for the most vulnerable workers, regardless of whether they are wage earners. ...
• Priorities. Because some jobs do more for development than others, it is necessary to understand where good jobs for development lie, given the country context.

This mildly split personality--between emphasizing the private sector and markets on one side and looking at possible roles for government on the other side--is probably an occupational hazard for economists. I doubtless suffer the affliction myself. But that said, I fear that the World Bank report may understate the difficulties of large-scale private-sector job creation in many countries around the world. Ultimately, true job creation occurs when an employer does not rely on government subsidies or handouts, and instead is producing a product at a price that customers actually want to buy. It requires letting firms fail, when they prove incapable of meeting this standard. And it requires letting firms continue and grow when they do meet this standard, even though a successful and growing firm can become a potential source of political and economic power that might in some way challenge the existing government. All of this is a long way of saying that when 40%, 50%, or 80% of the workers in an economy are involved in non-wage employment, the transition to a situation in which private-sector firms are numerous and large enough to offer wage employment to a very large proportion of the adults in a country is an enormous and difficult task.