As the world population continues to climb toward a projected population of 9 billion or so by mid-century, can agricultural productivity keep up? Keith Fuglie and Sun Ling Wang offer some thoughts in "New Evidence Points to Robust But Uneven Productivity Growth in Global Agriculture," which appears in the September issue of Amber Waves, published by the Economic Research Service at the U.S. Department of Agriculture.


Food prices have been rising for the last decade or so. Fuglie and Wang offer a figure that offers some perspective. The population data is from the U.N, showing the rise in world population from about 1.7 billion in 1900 to almost 7 billion in 2010. The food price data is a a weighted average of 18 crop and livestock prices, where the prices are weighted by the share of agricultural trade for each product. Despite the sharp rise in demand for agricultural products from population growth and higher incomes, the rise in productivity of the farming sector has been sufficient so that the price of farm products fell by 1% per year from 1900 to 2010 (as shown by the dashed line). 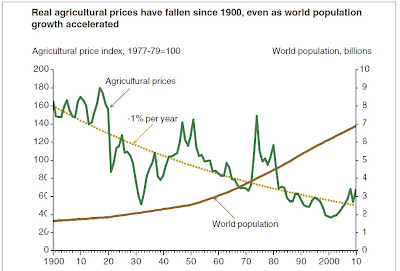 What are some main factors likely to affect productivity growth in world agriculture in the years ahead? Here are some of the reactions I took away from the paper.

Many places around the world are far behind the frontier of agricultural productivity, and thus continue to have considerable room for catch-up growth. "Southeast Asia, China, and Latin America are now approaching the land and labor productivity levels achieved by today's industrialized nations in the 1960s."

The rate of output growth in agriculture hasn't changed much, but the sources of that output growth have been changing from a higher use of inputs (machinery, irrigation, fertilizer) and toward a higher rate of productivity growth. "Global agricultural output growth has remained remarkably consistent over the past five decades--2.7 percent per year in the 1960s and between 2.1 and 2.5 percent average annual growth in each decade that followed. ... Between 1961 and 2009, about 60 percent of the tripling in global agricultural output was due to increases in input use, implying that improvements in TFP accounted for the other 40 percent. TFP's share of output growth, however, grew over time, and by the most recent decade (2001-09), TFP accounted for three-fourths of the growth in global agricultural production." 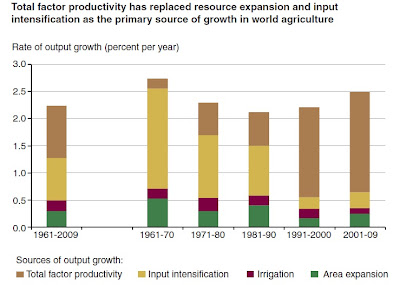 Sub-Saharan Africa has perhaps the greatest need for a productivity surge, because of low incomes and expected rates of future population growth, but is hindered by a lack of institutional capacity to sustain the mix of public- and private-sector agricultural R&D that benefits local farmers. "Sub-Saharan Africa faces perhaps the biggest challenge in achieving sustained, long-term productivity growth in agriculture. ... Raising agricultural productivity growth in Sub-Saharan Africa will likely require significantly higher public and private investments, especially in agricultural research and extension, as well as policy reforms to strengthen incentives for farmers.
Perhaps the single, most important factor separating countries that have successfully sustained long-term productivity growth in agriculture from those that have not is their capacity for agricultural R&D. Countries with national research systems capable of producing a steady stream of new technologies suitable for local farming systems generally achieve higher growth rates in agricultural TFP. ... Improvements in what can broadly be characterized as the "enabling environment" have encouraged the adoption of new technologies and practices by some countries; these include policies that improve economic incentives for producers, strengthen rural education and agricultural extension services, and improve rural infrastructure and access to markets."

There's no denying that feeding the global population as it rises toward nine billion will pose some real challenges, but it is clearly within the realm of possibility. For more details on how it might be achieved, here's my post from October 2011 on the subject of "How the World Can Feed 9 Billion People."