John Pencavel offers an angle on the evolution of American unions that I haven't seen recently by looking at the number of unions and their size. Short story: the number of American unions has declined, but the biggest unions have many more members than their precedessors. Pencavel has a nice summary of this work in "Public-Sector Unions and the Changing Structure of U.S. Unionism," written as a "Policy Brief" for the Stanford Institute for Economic Policy Research. 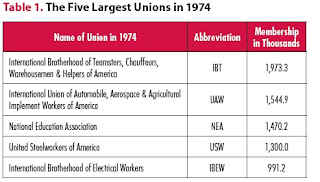 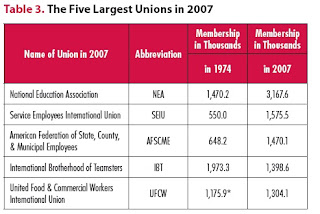 Pencavel compiles evidence that from 1974 to 2007, the total number of unions declined by 101, much of that due to unions consolidating with others. Unions with more than 1 million members actually had 2.7 million more total members in 2007 than back in 1974; conversely, unions with fewer than 1 million total members had 6.8 million fewer total members in 2007 than in 1974. In other words, union members are much more likely to belong to a very large unions now than a few decades ago.  Pencavel also compiles a longer-run table, going back to 1920, to show the share of unions members belonging to the biggest unions. Notice that most of the shift toward much larger unions has occurred since the early 1980s, and most of it traces to a change in the membership share of the largest unions. 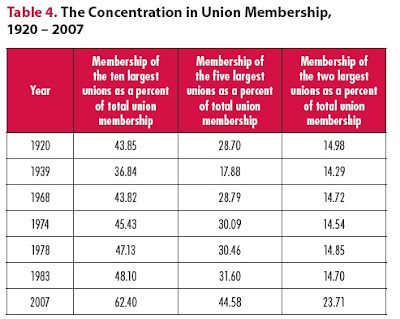 Pencavel draws his conclusions cautiously. "[A] union movement concentrated in a smaller number of large unions implies a union movement in which much of its wealth is allocated by a smaller number of decision-makers. ...  A serious concern is that a more concentrated union movement dominated by public sector unions may politicize unionism: That is, the focus of union activity will be less on attending to grievances and to the conditions of members at their place of work and more on issues that are the province of politics. ... Unions have always been involved in politics so this would be a change of degree, not of kind, but it is an important change because, ultimately, more politicized unionism will not help the typical union worker."

Albert Venn Dicey was a British legal theorist who died in 1922. Pencavel refers to one of his works from 1912, when Dicey was mulling over the issue of freedom of association, both in thinking about association through labor unions and association through product cartels. Pencavel notes that Dicey perceived a "classic dilemma" here, and Pencavel writes: "The principle that working people should have the freedom to form associations that represent and guard their interests is an intrinsic feature of a liberal society. But, if these associations exploit this principle to procure entitlements that expense of others, a new base of authority and influence is created that, at best, enjoys a greater share of the national wealth and, at worst, challenges the jurisdiction of the state. A balance is needed between promoting the principle of free association and avoiding the creation of a mischievous organization."

Dicey perceived this dilemma for freedom of association as applying both to the power of large unions and the power of large corporations. Here's Pencavel quoting Dicey in 1912: "In England, as elsewhere, trade unions and strikes, or federations of employers and lock-outs;…in the United States,
the efforts of Mercantile Trusts to create for themselves huge monopolies…force upon public attention the practical difficulty of so regulating the right of association that its exercise may
neither trench upon each citizen’s individual freedom nor shake the supreme authority of the
State.”

The central question about large public sector unions, of course, is whether in their ability to act as an powerful interested group that influences the results of state and local elections and then to have their conditions of employment determined in negotiations with officials of those same state and local governments, they have exploited the freedom of association in a way that creates what Pencavel calls a "mischievous organization." Pencavel ends on a questioning note: "This is not a prediction; it is a concern."

For more about U.S. union members, see my post "Some Facts about American Unions" from last March.