The economies of sub-Saharan Africa have been experiencing fairly rapid growth over the last decade. But for most people, the way that they share in economic growth is by having a steady wage-paying job. A report released in August by the McKinsey Global Institute considers the problem of "Africa at Work: Job Creation and Inclusive Growth."

As a starting point, Africa's economic growth sped up around 2000, and for the decade from 2000-2010, it was the second-fastest growing region of the world. If one counts a "consuming household" as a household with over $5000 per year in income, the number of African households in this category rose from about 59 million to 90 million over this decade. 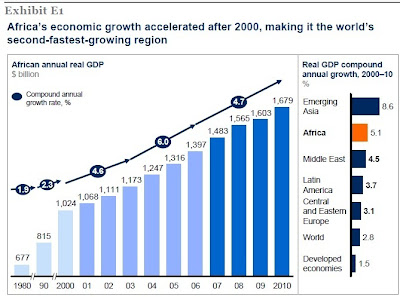 But for sharing this growth broadly across the population, people need stable wage-paying jobs. For example, when GDP grows because of a rise in the mining sector, wage-paying jobs do  not grow commensurately as much. McKinsey reports: "The continent's official unemployment rate is only 9 percent. Today, however, just 28 percent of Africa's labour force has stable wage-paying jobs." In some countries like Ethiopia, Mali, and the Democratic Republic of Congo, fewer than 10 percent of adults have stable wage-paying jobs. McKinsey refers to those who live with subsistence agricultural jobs or informal self-employment as having "vulnerable employment," which strikes me as a nicely understated name for a very difficult life situation. Here's a figure with some information about the number of wage paying jobs across countries. 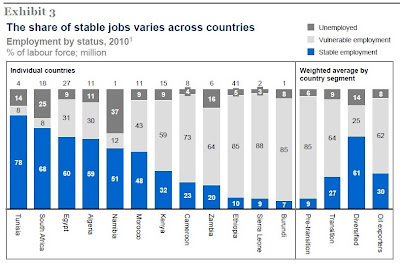 Africa certainly has potential for creation of wage-paying jobs in areas like commercial farming, manufacturing, retail and hospitality--all labor-intensive sectors of the economy that in different ways can tap into world markets and export demand. In a McKinsey survey of employers in a number of countries, more than half named macroeconomic problems as a main factor holding back job growth were macroeconomic and 40 percent names political instability. 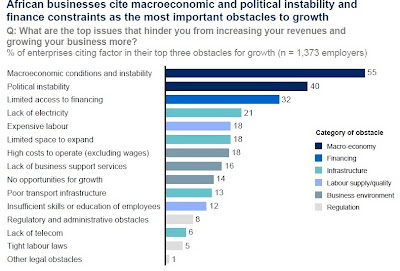 In the figure above, diversified economies are much more likely to have a larger share of their workers in stable, wage-paying jobs. McKinsey points out that when countries South Korea, Thailand, and Brazil were at Africa's current stage of economic development, they were all more successful in  creating more wage-paying jobs. Ultimately, the difficulty is that an employer with employees is a particular form of social organization, which in turn is affected by political, legal, regulatory, and social factors. In many countries in Africa, the particular form of social organization that is a wage-paying firm with fairly stable and steady employment is not well-known or well-established. Africa's prospects for inclusive economic growth may well depend on its ability to foster the conditions for starting and growing such business organizations.

For some previous posts on whether Africa is at long last generating self-sustaining growth, see "Africa's Economic Development" (June 13, 2011), "Africa's Growing Middle Class" (September 19, 2011), and "Africa's Prospects: Half Full or Half Empty?" (December 15, 2011).