Everyone knows that Americans are a mobile society, moving toward opportunity and jobs, right? Not according to the data from the U.S. Census Bureau, which shows that of geographic mobility in 2011 were at their all-time low since the start of the data in 1948, and were only a tad higher in 2012. Here's the figure just released by the U.S. Census Bureau. The blue bars show the absolute number of moves, as measured on the left-hand axis. The black line shows the rate of mobility, as measured by the percentage of U.S. households that moved. 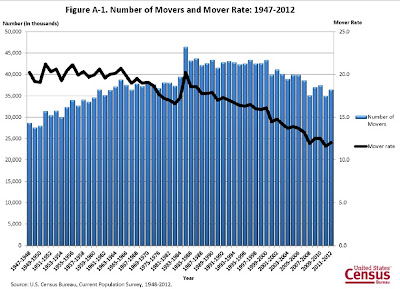 Another chart gives a sense of how far the move are. Most moves are within a given county, or between nearby counties, while relatively few involve moves to another state or abroad. 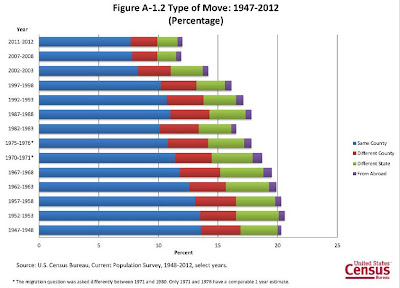 Why is the mobility rate down? One potential set of explanations focuses on the Great Recession: with jobs scarce, and declining home values in many areas, people stayed in place either because of a lack of jobs to move to, or by the unexpectedly low price of their home, or both. But this explanation is at best a very partial one.The downward trend in U.S. mobility goes back well before the start of the recession. People who are unemployed are often more likely to move, not less likely, as a report accompanying these charts pointed out.  And if the issue is declining home values, it's hard to explain why mobility rates are down for both renters and for homeowners. 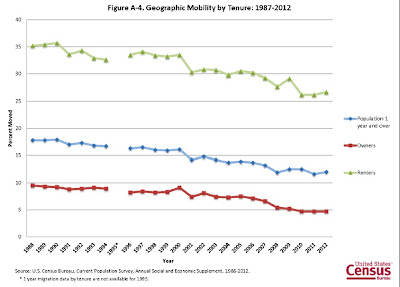 The Census Bureau puts out the data, but often sidesteps much discussion of underlying causes. However, in the Spring 2011 issue of my own Journal of Economic Perspectives, Raven Molloy, Christopher L. Smith, and Abigail Wozniak fill this gap with a discussion of "Internal Migration in the United States." Like all articles in JEP back to the first issue in 1987, the article is freely available compliments of the American Economic Association.

Molloy, Smith, and Wozniak consider possible long-term explanations for a declining rate of mobility, like the possibility that an aging population less likely to move. As they put it: "However, these differences across groups are not useful in explaining why migration has fallen in recent decades. The decrease in migration does not seem to be driven by demographic or socioeconomic trends, because migration rates have fallen for nearly every subpopulation ..."

They freely admit that there is not yet an answer in the economic research as to why geographic mobility has been declining, but they offer some hypotheses.

For example, one argument is that migration was high in the post WWII years as part of a significant population shift to the South, a shift which has been diminishing every since. But this factor doesn't seem to be significant enough, given the observed data on interregional migration.

Another hypothesis is that there are more two-earner families, and so when one person loses a job the household may be more reluctant to relocate. But this argument faces the problem that "the percentage of households with two earners has been quite stable over the last 30 years."

Yet another possibility "is that technological advances have allowed for an expansion of telecommuting and flexible work schedules, reducing the need for workers to move for a job." However, the data on telecommuting doesn't show that it is a large enough factor to explain the decline in mobility.

And yet another possibility "is that locations have become less specialized in the types of goods and services produced, making the types of available jobs more similar across space. ... A related idea is that the distribution of amenities has become more homogeneous across locations, making residence in any particular city less attractive." This explanation may have some truth in it, but it's proven difficult to gather data that would allow it to be tested in any definitive way.

Finally, it may just be that many Americans are shifting their preferences away from being willing to move. Molloy, Smith and Wozniak present evidence that "the secular decline in geographic mobility appears to be specific to the U.S. experience, since internal mobility has neither fallen in most other European economies nor in Canada—with the United Kingdom as a notable exception."

Whatever the reason behind the decline in geographic mobility, there are implications for the economy if the workforce becomes less flexible and less willing to move from areas where the economy is weaker to where it is stronger. In addition, lower mobility has broad implications for what its like to live in America.  People find it  harder to envision their lives as involving a big move.  Social networks are reshaped. When mobility drops, we become a country where you are less likely to end up living and working with people from other states, other counties, or even other parts of your own county.