A couple of weeks ago, I posted on "China's Economic Growth: A Different Storyline." Here, I'll follow up with three snippets about China's economy that crossed my desk recently: news on China's currency, on over-investment in China, and a way in which the U.S. and Chinese economies are increasingly and intriguingly intertwined.

The value of China's currency

One of the most common complaints against China is that it preserves an undervalued currency as a way of stimulating its exports in world markets. As I pointed out in my earlier post, China's currency was actually weakening when China was running a near-zero balance of trade through much of the 1980s and 1990s, and China's large trade surpluses of the last few years have actually been accompanied by a strengthening renminbi yuan. The U.S. Department of the Treasury presents a semi-annual Report to Congress on International Economic and Exchange Rate Policies. In discussing China's exchange rate the report says:

"From June 2010, when China moved off of its peg against the dollar (that it had reintroduced in 2008), through November 9, 2012, the RMB has appreciated by a total of 9.3 percent against the dollar. Because inflation in China has been higher than in the United States over this period, the RMB has appreciated more rapidly against the dollar on a real, inflation-adjusted, basis, appreciating 12.6 percent since June 2010 and 40 percent since China initiated currency reform in 2005. ... China’s real effective exchange rate (REER) – a measure of its overall cost-competitiveness relative to its trading partners – has appreciated since China initiated currency reform in mid-2005, after declining between 2001 and 2005. From July 2005 to October 2012, China’s real effective exchange rate appreciated by 27 percent. ... [T]he IMF concluded that the RMB was moderately undervalued against a broad basket of currencies, and Table 5 in the IMF’s Pilot External Sector Report shows the RMB was undervalued by between 5 and 10 percent on a real effective basis, as of July 2012."

Thus, whatever the merits of the complaints about undervaluation of China's currency back in 2005, large changes have happened since then. Some further strengthening of the yuan seems in store, as well.

From a U.S. point of view, the idea that over-investing could harm an economy seems almost nonsensical. But after all, investment involves a tradeoff: less consumption now in return for more production and consumption in the future. In addition, investment will tend to have diminishing marginal returns--that is, increasing a country's investment rate from 10-20% of GDP will have a bigger payoff in the future than increasing that same country's investment rate from 40-50% of GDP. At some point, the social costs of giving up present consumption will be greater than the benefits of ratcheting investment a little higher.


Il Houng Lee, Murtaza Syed, and Liu Xueyan analyze these questions in "Is China Over-Investing and Does it Matter?", which appears as IMF Working Paper WP/12/277 published in November. Based on their model, they find: "Even allowing for elevated investment levels associated with most
economic take-offs, the econometric evidence suggests that China is over-investing. China’s
predicted investment norm over the last thirty years has ranged between 33-43 percent of GDP. In reality, it has fluctuated in a much broader band of 35-49 percent of GDP." 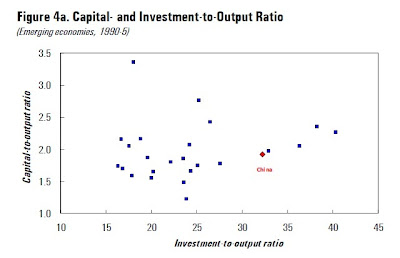 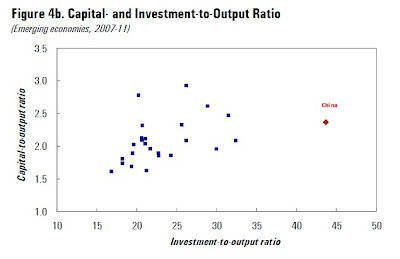 The Chinese government has recognized for several years now that its economy needs "rebalancing" from being investment-driven to being consumption-driven. The U.S Treasury semi-annual report says it this way: "Chinese leaders have identified shifting away from growth driven by exports toward a greater reliance on domestic consumption as a critical goal for sustaining growth in the medium to long term. China has partially succeeded in shifting away from a reliance on exports for growth, and China’s current account surplus has fallen markedly over the past four years, from 10.1 percent of GDP in 2007 to 2.8 percent in 2011. In the first three quarters of 2012, China’s current account fell to 2.6 percent of GDP ..."


Nick Bloom, Mirko Draca, and John Van Reenen have an interesting article about "China Prompting Western Creativity" that appears in the December 2012 issue of Finance and Development. They discuss the following pattern:

"When the California high-tech company Eye-Fi introduced a new memory chip in 2005 with built-in wi-fi capability it faced a challenge common to many technology firms: how to take a promising prototype and turn it into a mass-market, low-cost product—and get it to market before its rivals.
Eye-Fi’s solution was an approach that Western firms increasingly are taking in response to the emergence of China as a manufacturing superpower. It used a local California boutique manufacturer to develop prototypes, which Eye-Fi’s engineers refined on an almost daily basis. As demand took off and the product was widely marketed, Eye-Fi moved from low-volume boutique production in the United States to high-volume, low-cost production in China. The high-skill innovation and development took place in the United States, but the lower-skill mass production was moved offshore. As Chinese mass manufacturing increasingly dominates global production, this story is being repeated across the United States, Europe, and Japan.The stories of Apple’s iPhone and iPad are similar."

They report the results of a more systematic statistical study: "Events such as China’s accession to the WTO [in 2001- are natural experiments for examining the effect of competition from low-wage countries—an opportunity we put to use in our research. In the largest ever study of the impact of China on Western technological change, we tracked the performance of almost half a million manufacturing firms in 12 European countries over the past decade ... A startling finding is that about 15 percent of technical change in Europe in the past decade can be attributed directly to competition from Chinese imports, an annual benefit of almost €10 billion to European economies."

In the globalizing economy of the future, at least some of the dynamism and competitiveness of the U.S. economy will be determined by the ability of U.S. firms to build these sorts of ties with operations in China, as well as India, Latin America, eastern Europe, and probably Africa, too.