I have sometimes said that Supplemental Security Income, or SSI, is the federal program to those who are both old and low-income. But while that was an OK if inaccurate shorthand a few decades ago, its no longer appropriate. SSI does cover the low-income elderly, but it also covers those who are low-income from ages 18-64 with disabilities, and also disabled children under the age of 18 in low-income household. Back in 1980, about half of those receiving benefits were in the over-65 low-income. But at present, only 25 percent of the people covered by SSI are elderly, and they receive only 19 percent of the payments from this program. The Congressional Budget Office offers this and other facts about the program in its just-released report: "Supplemental Security Income: An Overview."

Here a figure from CBO showing the three main groups in the SSI program, and how their numbers have evolved over time.

Given this shift in SSI toward those who are disabled, an obvious question is how SSI relates to the other other main federal program for those with disabilities, the Social Security Disability Insurance program. For a quick overview of that program with some suggestions for reform, see this post from August 2011 on "Disability Insurance: One More Trust Fund Going Broke." The CBO report explains the practical differences in this way:

"Social Security Disability Insurance (DI), the other major federal program that provides cash benefits to people with disabilities, uses the same disability standard for working-age adults that applies in SSI, but it differs from SSI in several respects. For example, DI is available only to adults (and their dependents) who have a sufficient record of work, but past work is not a requirement for SSI eligibility. DI also places no limits on beneficiaries’ income or assets, but SSI recipients must have low income and few assets. In addition, DI is funded primarily by means of a dedicated payroll tax, but SSI is funded out of general revenue."


Here's a quick overview of eligibility rules for the three main groups in the SSI program. For those in the single largest category of age 18-64, low-income, and disabled, the rules look like this:

"To qualify for SSI, those recipients must demonstrate that their disability prevents them from participating in “substantial gainful activity,” which in 2012 is considered to mean work that would produce earnings of more than $1,010 a month. (That amount is adjusted annually for average wage growth.) Older adults are more likely than younger adults are to receive payments: Fewer than 2 percent of people between the ages of 18 and 29 receive payments; slightly more than 3 percent of people between the ages of 50 and 64 do. Especially among younger adults, eligibility for the program is determined most commonly on the basis of mental disability: Three-quarters of participants ages 18 to 39 were awarded payments primarily because of a mental disorder. That share declines with age, as conditions such as spinal  disorders and heart disease become more prevalent. Among SSI recipients between the ages of 60 and 64, for example, one-third receive payments because of mental disorders, one-quarter receive payments because of musculoskeletal disorders, and one-tenth receive payments because of circulatory disorders ... The share of adults ages 18 to 64 receiving SSI payments has increased over time, rising from slightly more than 1 percent of the population 30 years ago to more than 2 percent today."


For children to qualify for SSI, here are the standards:

"Children who qualify for SSI must be disabled and, in most cases, must live in a household with low income and few assets. To be considered disabled, a child must have a physical or mental impairment that results in marked and severe functional limitations and that is either expected to last for at least 12 consecutive months or to result in death. Most child recipients—three-quarters of recipients
between the ages of 5 and 17 and one-third of those under the age of 5—qualify because of a mental disorder.

And for the elderly, the rules for SSI are based on low income. The low-income elderly rely less  on SSI than they used to in part because of broader participation in Social Security -- for example, more women with an earnings history that brings non-negligible amount of Social Security payments--and also because of how Social Security benefits have been indexed to rise with inflation over time.

"People age 65 or older can qualify for SSI on the basis of low income and assets alone; they need not be disabled. As a result, people in that age group are more likely than younger people are to qualify for the program; about 2.1 million, or 5 percent of the elderly population, do. (About half of those recipients qualified as disabled recipients before they turned 65.)

The SSI program will cost about $53 billion this year. Over the last 20 years or so, spending on the program expressed as a share of GDP is fairly flat. 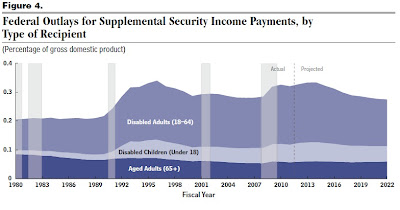 As with any program oriented to those with disabilities or with low incomes, I'm sure there should be a continual process of re-considering just how "disability" is defined and what incentives to work at least part time are being provided by the benefit structure. But this program isn't one where I would expect even a fairly rabid budget-cutter to find substantial spending cuts.