Elinor Ostrom on the Commons

Elinor Ostrom shared the 2009 Nobel prize in economics. Her contribution, as described by the Nobel committee, was that she "[c]hallenged the conventional wisdom by demonstrating how local property can be successfully managed by local commons without any regulation by central authorities or privatization." Last March, she gave the  Hayek Memorial Lecture at the Institute for Economic Affairs on the topic: "The Future of the Commons: Beyond Market Failure and Government Regulation." The IEA has now made her talk available as an e-book, together with some useful essays and commentary.

For example, Vlad Tarko offers some biographical and intellectual background on Ostrom. He sums up some main themes of her work in this way:

"The classic solution to the public goods problem has been to use taxes to pay for public goods, thus adjusting their supply level upwards (presumably towards the optimum). The classic solution to the ‘tragedy of the commons’ problem, provided by Hardin (1968), has been to transform the resource into a private good (either by privatising it or by turning it into government property with proper monitoring). One of the main reasons for which Elinor Ostrom received her Nobel Prize is the discovery that these classic solutions are not the only possible ones. What Ostrom discovered in her empirical studies is that, despite what economists have thought, communities often create and enforce rules against free-riding and assure the long-term sustainability of communal properties. Her ‘design principles’ explain under what conditions this happens and when it fails."


Ostrom's essay is especially useful as a reminder of how determinedly pragmatic she was in her work, and how unwilling to be pigeon-holed. She wrote:

"Challenge one, as I mentioned, is the panacea problem. A very large number of policymakers and policy articles talk about ‘the best’ way of doing something. For many purposes, if the market was not the best way people used to think that it meant that the government was the best way. We need to get away from thinking about very broad terms that do not give us the specific detail that is needed to really know what we are talking about.

"We need to recognise that the governance systems that actually have worked in practice fit the diversity of ecological conditions that exist in a fishery, irrigation system or pasture, as well as the social systems. There is a huge diversity out there, and the range of governance systems that work reflects that diversity. We have found that government, private and community-based mechanisms all work in some settings. People want to make me argue that community systems of governance are always the best: I will not walk into that trap." 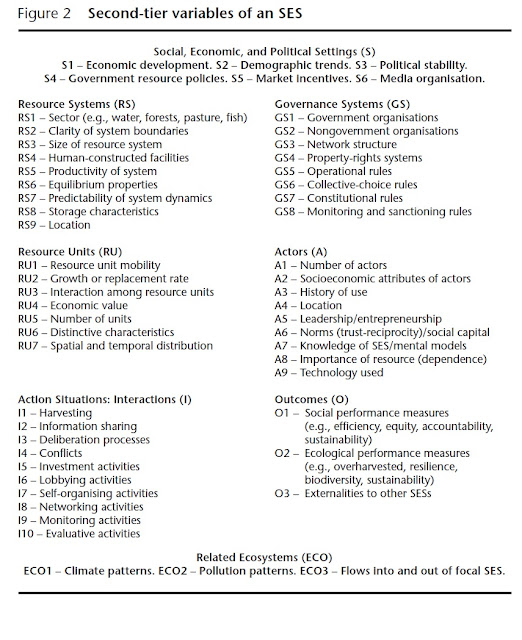 This kind of table helps to illustrate why I often found Ostrom's to be remarkably insightful and also frustrating at the same time. Her insistence on pragmatic analysis forced one to look at fine-grain detail in a way that often yielded fascinating insights. But in her approach, it often seemed hard to draw more general lessons, because it sometimes felt as if every individual study fell into its own category with its own rules. Ostrom acknowledges both reactions in her essay:

"I am going to warn you that when people see this for the very first time, there is a kind of worried reaction at its complexity. This looks very complex. ... Researchers can fall into the trap of pretending that their own cases are completely different from other cases. They refuse to accept that that there are lessons that one can learn from studying multiple cases. In reality, to diagnose why some social-ecological systems do self-organise in the first place and are robust, we need to study similar systems over time. We need to examine which variables are the same, which differ and which are the important variables so that we can understand why some systems of natural resource management
are robust and succeed and others fail."

Ostrom's work excelled at dispelling ideological certitudes: there was always an example to show that things might work differently. She had an extraordinary ability to postpone the easy answer, and to keep digging down into specific details.