A UK organization called the Global Climate Project has put out its annual estimates of annual carbon emissions, and perhaps unsurprisingly, the world economy is on track to set a new record in 2012 of 38.2 billion tons, up a few percentage points from 2011.

Here's one figure from the report showing trendlines for the four largest emitters: China, the U.S., the EU, and India. Notice in particular that China is not only by far the largest carbon emitter, but is a spike-like upward trend in emissions. Emissions in the U.S. are fairly flat since the late 1990s. Emissions from India are on a path to soon surpass emissions from the EU. 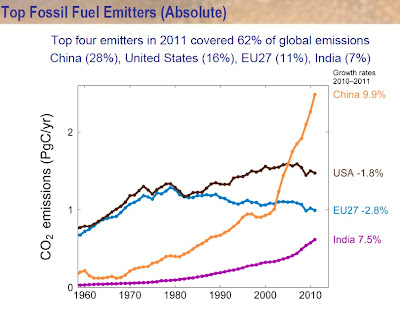 This next figure shows carbon emissions on a per capita basis. The U.S. economy is by far the highest in per capita carbon emissions, although the level is down a fair amount since the 1970s, and down in the last 10 years or so as well. The rise in world per capita emissions is again being driven by China in particular, as well as India and other emerging market economies. 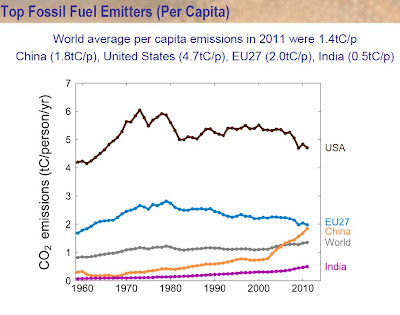 News stories on the report (for example, here ) quote climate change scientists to the effect that it's time to "throw everything we have at the problem." What does that mean in practice?

I posted about a year ago on my support for "The Drill-Baby Carbon Tax: A Grand Compromise on Energy Policy." "The Drill-Baby Carbon Tax is my proposed grand compromise for energy policy in the United States. As the name suggests, it has two parts. On one side, there would be a national commitment to move ahead with all deliberate speed in developing the vast U.S. fossil fuel energy resources that are now technologically available. On the other side, the United States would enact a appropriate carbon tax to offset concerns over the risks of climate change."

In particular, those who feel that climate change is truly serious threat should be supporting accelerated exploitation of natural gas resources. As the just-released Global Carbon Project report notes,  "The recent shift from coal to gas in the US could “kick start” mitigation". In a post last June, I reviewed some evidence on "Unconventional Natural Gas and Environmental Issues." Yes, it's important that the newly available gas resources be exploited with care and best practices. But because natural gas burns so much more cleanly than coal, this shift offers a definite method of reducing carbon emissions over the next decade or so.

In the spirit of throwing everything we can at the problem, what other options are available? Last July I posted in"Other Air Pollutants: Soot and Methane" on some analysis and proposals for reducing these other air pollutants, both for their immediate health benefits, which are substantial, and also because they play an important role in climate change. I'm less positive about increasing fuel economy standards for cars, for reasons discussed in a February post, "Are the New Fuel Auto Economy Standards for Real?"

We should also be looking at other methods of environmental protection that could have offsetting effects on carbon emissions. As one example, the most recent issue of Resources magazine from Resources for the Future discussed protection of mangroves in "Blue Carbon: A Potentially Winning Climate Strategy."

"Mangroves, which are among the most unique and rapidly disappearing natural environments in the world, store enormous amounts of carbon, especially in the earth below their roots, possibly equal in total to roughly 2.5 times annual global CO2 emissions. Between 1990 and 2005, mangrove loss occurred at a rate of about 0.7 percent per year. When these coastal habitats are disturbed by changes in land use, the so-called blue carbon locked away in the bodies of the plants or in the soil is gradually exposed to air and released as CO2 into the atmosphere. In a new study released by RFF and the University of California, Davis, co-authors Juha Siikamäki, James Sanchirico, and Sunny Jardine estimate that protecting mangrove forests from development can reduce CO2 emissions at a cost of $4–$10 per ton, while the current market prices for carbon offsets are on the order of $10–$20. By protecting these ecosystems from development or destruction, global leaders could achieve a reduction in greenhouse gas emissions on par with taking millions of cars off the roads. This suggests that in many places mangroves are worth saving for their carbon storage potential alone."

The study by Siikamäki, Sanchirico, and Jardine appeared in the September 2, 2012, issue of Proceedings of the Natural Academy of Sciences: a pre-print version is available here.  In a follow-up "Commentary" in that same issue, Ken Caldeira offers a word of pragmatic warning about mangrove protection. He points out that "approximately 80% of the global “emissions avoidance potential” from mangrove protection is located in the 50% of countries that rank lowest on the World
Bank governance index. ... Protection of mangroves provides a cost-effective means of avoiding CO2 emissions and, importantly, helps to maintain biodiversity. However, we need good policies and good institutions that can provide confidence that contracts can be enforced, displacement can be prevented, and some semblance of permanence can be a realistic expectation. It is shameful that we do not simply find the resources to protect and sustainably manage all mangrove ecosystems—and
consider avoided carbon emissions to be an ancillary cobenefit."

What else might be tried? I'm all in favor of continuing research and development on other options that might prove useful: alternative forms of energy that don't produce carbon emissions, technologies for carbon capture and storage, making more of the roofs and roads white so that they are more reflective, even more controversial proposals for geo-engineering the clouds or the ocean. But at present, it's not clear to me how cost-effective these steps would be at a scale large enough to matter.

I sometimes find myself in the situation of spending time with people who speak very strongly about the dangers of climate change and fiercely attack those who do not trumpet these risks. I sometimes stand accused of not speaking out loudly enough, which is probably a fair complaint. I have no expertise in atmospheric science, and I do not understand at any deep level how climate models are built. However, I do accept that many top scientists believe that the risks of global climate change are real, and when confronted with risks, economics can offer useful ways of thinking about how the cost-effective policies to mitigate those risks.

But what strikes me as peculiar in these discussions is that the same folks who have been lecturing me about how I don't blow my little trumpet loudly enough about the enormous risks of climate change become quite picky when talking about possible solutions. For them, the policy agenda for climate change is to favor energy conservation and "green" alternative energy, but little else. They often oppose exploiting new natural gas resources. They are often queasy about a carbon tax. They reflexively dislike the idea that someone might find a way to capture and store carbon--thus solving the problem of carbon emissions without any reduction in energy use. They spend little time on the subject of how one might get carbon emissions from China and India under some semblance of control, nor on issues of how to reduce soot and methane or how to save mangrove swamps.

If the risks posed by high levels of carbon emissions and other greenhouse gases are worth addressing, and I think they are, then it's potentially useful and cost-effective to think about addressing them from every possible direction.