Can $12.1 Trillion be Boring? Thoughts on International Reserves

I knew that many countries were holding substantial international  reserves, but I hadn't quite realized how large those reserves have become. Edwin Truman explains: "At the end of 2011, international reserve assets alone amounted to 17 percent of world GDP and an average of 29 percent of the national GDP of emerging market and developing countries. ... Including the international assets of SWFs [sovereign wealth funds] and similar entities would boost those percentages substantially above 20 percent and close to 40 percent respectively. At a 5 percent total return, those assets yield 1 to 2 percent of GDP per year."

Truman has some additional "Reflections on Reserve Management and Inernational Monetary Cooperation" in remarks he delivered at a World Bank/Bank of International Settlements Conference earlier this month. I saw the talk posted at the website of the Peterson Institute for International Economics.  Truman compiled a useful table to show the rise in such reserves: here, I'll give a trimmed-down version of the table, along with some of the main patterns as I see them. 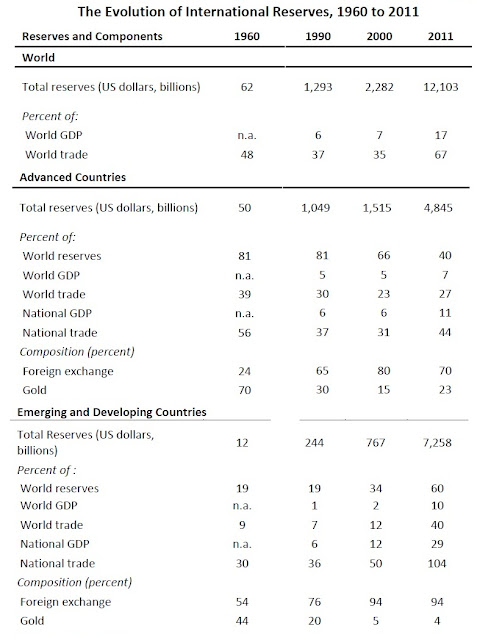 Here are a few of the patterns that jump out at me from the table.

2) Most of this increase in reserves has come from the emerging and developing economies. The share of world reserves held by advanced economies was about 80% from the 1960s up through about 1990, but since then has plummetted to 40%. For the emerging and developing countries, their total reserves were about one-third of their trade from 1960 up through about 1990, but hen rose to half of their volume of trade by 2000 and to 104% of their trade volume by 2011.

Truman offers a useful decade-by-decade sketch of how international reserves have evolved since the 1960s. For the most recent decade, Truman points out:

"The increased wealth in the hands of more and more governments has raised new concerns about the motivations, accountability, and transparency of the managers of that wealth. ... [E]nhancement of cooperative arrangements in this area is falling behind the need for them in the face of the explosion of the size and number of significant public investors, bringing in many non-traditional investors. This is a global issue. The notion that a country’s public investments are the exclusive concern of the country itself is analytically wrong and fundamentally dangerous. Two countries (at least) share an exchange rate. Similarly, two countries (at least) share the effects of cross-border public investments. ... The alternative to increased cooperation on public sector investment policies is a currency war. ... The greater risk is that restrictions and barriers will increase affecting not only cross-border official investments, but all cross-border financial transactions. Once we start down that path, a trade war would not be difficult to envisage, and the consequences for global growth and stability could be severe."


My own sense is that discussions of international reserves often seem to be deeply boring (if it's possible for discussions of $12.1 trillion to be boring!), but these financial flows are enormous enough to rock the world economy, and their management and purpose are often obscure. I suspect that, perhaps sooner rather than later, the ways in which these funds are managed and the choices they make will be the source of very prominent and not-at-all boring political and economic conflict.