Back in 1974, Richard Easterlin published a paper called "Does Economic Growth Improve the Human Lot? Some Empirical Evidence" (available here and here, for example). Easterlin raised the possibility that what really matters to most people is not their absolute level of income, but their income level relative to others in society. If relative income is what matters, then an overall rise in incomes doesn't make me any better off relative to others, and so my happiness does not increase. Income becomes a sort of arms race: even as we all race to get more, it doesn't actually make us any happier.

Since then, the question of whether income brings happiness has been much-debated by economist and other social scientists. In "The New Stylized Facts about Income and Subjective Well-Being," Daniel W. Sacks, Betsey Stevenson, and Justin Wolfers offer a compact and readable summary of the evidence (much of which they generated in earlier research) that income is not just relative--and so more income does increase happiness. The paper is available as IZA Discussion Paper No. 7105, released in December.

At a basic level, this research looks at economic data on levels of income and compares it with survey data on on life satisfaction. For example, the Gallup World Poll provides data from 122 countries on the question: “Please imagine a ladder with steps numbered from zero at the bottom to ten at the
top. Suppose we say that the top of the ladder represents the best possible life for you, and the
bottom of the ladder represents the worst possible life for you. On which step of the ladder would
you say you personally feel you stand at this time?”

As a starting point, let's compare countries across the world in terms of real per capita GPD, along with their answers to this question on a scale from 0-10. The horizontal axis of the graph is a logarithmic scale: that is, rather than rising by a fixed amount between each tic mark, it rises by a fixed proportion (in this case, doubling) between each tic mark. 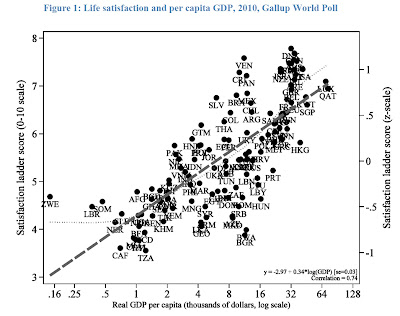 The general pattern is clear those in higher-income countries tend to report more life satisfaction. The best-fit straight line is drawn through the data. The much lighter dotted line is a "non-parametric" line which is a best-fit line that isn't required to be straight,and thus flattens out near the bottom and curves more steeply at the top than a straight line. Broadly speaking, it seems as if each doubling of income does lead to a distinct rise in the happiness scale, both for low-income and for high-income countries.

Of course, this result by itself doesn't prove the case either way. It could be that people in high-income countries are happier because they perceive that they are not in low-income countries, and so the happiness from their income is relative, rather than absolute. Thus, a second test is to look within individual countries at the happiness level of those with different income levels. If happiness from income is a relative concept, one might expect that, say, the rise in income from being a low-income person in the U.S to being a high-income person in the U.S. would bring more happiness, but the rise in happiness should be much less within a country than it would be across countries. However, the rise in happiness as a result of higher incomes within a country ends up looking very much like the relationship between countries. 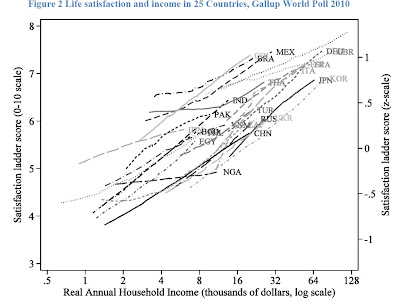 Yet another test is to look at comparisons over time: that is, as economic growth gradually raises income levels, do people on average within a given country report a higher level of  happiness. The data here is harder to interpret, because long-run data on happiness measures isn't available for many countries, and the wording of the survey questions about life satisfaction often changes over time. While acknowledging that the existing evidence is messy and difficult to interpret firmly, the authors argue that it is at least consistent with the same finding: that is, higher income levels over time are correlated with higher reported life satisfaction.

But not for the United States! Sacks, Stevenson, and Wolfers write: "The US, however, remains a paradoxical counter-example: GDP has approximately doubled since 1972 and well-being, as measured by the General Social Survey, has decreased slightly." The authors point out that any individual country may have specific social changes that alter the reported "life satisfaction." In particular, they point out that inequality of income started rising in the U.S. economy in the 1970s, which may explain why the typical or median person in the economy isn't feeling much better off. They write: "We suggest that the US is more of an interesting outlier than a key example."

Those who want to sort through why Sacks, Stevenson, and Wolfers reach different conclusion from Easterlin can dig into the paper itself: a lot of the difference, they argue, is just that more and better data is available now.

For my own part, I confess that I find happiness surveys both intriguing and dubious. It seems to me that higher levels of income are typically correlated with more health, education, travel, consumption, and a higher quality of recreation, so it's not a surprise to me it seems to me that happiness rises iwth income. On the other side, it does seem to me that survey questions about life satisfaction are answered in the context of a particular place and time. If a person says that their life satisfaction was a 7 in 1960 on a scale of 0-10, and another person says that their life satisfaction is a 7 in 2013, are those two people really equally satisfied? To put it another way, if the person from 2013 was transported by a time machine back to live in 1960, with all their memories and knowledge of the technologies, medicines, foods, education, and travel available in 2013, would that time traveller really be equally happy in either time period? I suspect that when most people are asked to rank happiness on a scale of 0-10, they don't say to themselves: "Well, people living 100 years from now might have extraordinarily high levels of income and technology, so compared with them, I'm really no more than a 2." At best, survey questions on a scale of 0-10 seem like an extremely rough-and-ready way of measuring life satisfaction across very different countries or across substantial periods of time.