While browsing through the Statistical Appendix to the October 2012 Global Financial Stability Report from the IMF (and yes, it's the sort of thing I do), I ran across these numbers on the size of the global financial sector. In particular, the sum of the value of global stocks, bonds, and bank assets is 366% of the size of global GDP. 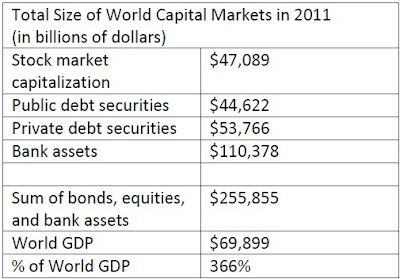 Of course, there is some mixing of apples and oranges here: bank assets, debt, and equities may overlap in various ways. But contemplate the sheer size of the $255 trillion total!

Given this size, and given the financial convulsions that have rocked the world economy in the last few years, it seems time to remember an old argument and put it to rest. The old argument was whether finance should be considered part of economics. For me, the most memorable statement of that position occurred back when Harry Markowitz, who was later to win the Nobel Prize in economics for his role in developing portfolio theory, was defending his doctoral dissertation on this work back in 1955.

Markowitz had taken a job at RAND, and so was flying back to the University of Chicago to defend his dissertation. He often told this story in interviews: here's a version from a May 2010 interview.


"I remember landing at Midway Airport thinking, 'Well, I know this field cold. Not even Milton Friedman will give me a hard time.' And, five minutes into the session, he says, 'Harry, I read your dissertation. I don't see any problems with the math, but this is not a dissertation in economics. We can't give you a Ph.D. in economics for a dissertation that isn't about economics.' And for most of the rest of the hour and a half, he was explaining why I wasn't going to get a Ph.D. At one point, he said, 'Harry, you have a problem. It's not economics. It's not mathematics. It's not business administration.' And the head of my committee, Jacob Marschak, shook his head, and said, 'It's not literature.'

"So we went on with that for a while and then they sent me out in the hall. About five minutes later Marschak came out and said, 'Congratulations, Dr. Markowitz.' So, Friedman was pulling my leg. At the time, my palms were sweating, but as it turned out, he was pulling my leg ..."

It's not clear to me that Friedman was just goofing on Markowitz. Yes, Friedman wasn't willing to block this dissertation. However, in a later interview, Friedman did not recall the episode but said: "What he [Markowitz] did was a mathematical exercise, not an exercise in economics."

But Markowitz had the last word after winning the Nobel prixe. In his acceptance lecture back in 1990, he ended by telling a version of this story, and then said: "As to the merits of his [Milton Friedman's] arguments, at this point I am quite willing to concede: at the time I defended my dissertation, portfolio theory was not part of Economics. But now it is."

The old view of economics and finance was that, except perhaps for a few exceptions like major bubbles, the real economy was the dog and the financial economy was the tail--and the tail couldn't wag the dog. But trying to study the problems of the modern world economy without taking finance into account would be incomprehensible.