Douglas Clement has a characteristically excellent "Interview with Elhanan Helpman" in the December 2012 issue of The Region, published by the Federal Reserve Bank of Minneapolis. The main focuses of the interview are "new growth theory, new trade theory and trade (and policy) related to market structure." Here's Helpman: 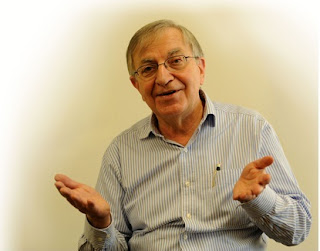 On the origins of "new trade theory"

"When I was a student, the type of trade theory that was taught in colleges was essentially based on Ricardo’s 1817 insight, Heckscher’s 1919 insights and then Ohlin’s work, especially as formulated by [Paul] Samuelson later on. This view of trade emphasized sectoral trade flows. So, one country exports electronics and imports food, and another country exports chemicals and imports cars. This was the view of trade. The whole research program was focused on how to identify features of economies that would allow you to predict sectoral trade flows. In those years, there was actually relatively little emphasis on Ricardian forces, which deal with relative productivity differences across sectors, across countries, and there was much more emphasis on differences across countries in factor composition. ...

Two interesting developments in the 1970s triggered the new trade theory. One was the book by Herb Grubel and Peter Lloyd in which they collected a lot of detailed data and documented that a lot of trade is not across sectors, but rather within sectors. Moreover, that in many countries, this is the great majority of trade. So, if you take the trade flows and decompose them into, say, the fraction that is exchanging [within sectors] cars for cars, or electronics for electronics, versus [across sectors] electronics for cars, then you find that in many countries, 70 percent—sometimes more and sometimes less—would have been what we call intra-industry trade, rather than across industries....

The other observation that also started to surface at the time was that when you looked at trade flows across countries, the majority of trade was across the industrialized countries. And these are countries with similar factor compositions. There were obviously differences, but they were much smaller than the differences in factor composition between the industrialized and the less-developed countries. Nevertheless, the amount of trade between developed and developing countries was much smaller than among the developed countries.

This raised an obvious question. If you take a view of the world that trade is driven by [factor composition] differences across countries, why then do we have so much trade across countries that look pretty similar? ...


Then, on the theoretical front, monopolistic competition was introduced forcefully by both Michael Spence in his work, which was primarily about industrial organization, and [Avinash] Dixit and [Joseph] Stiglitz in their famous 1977 paper. These studies pointed out a way to think about monopolistic competition in general equilibrium. And trade is all—or, at least then, was all—about general equilibrium.

So combining these new analytical tools with the empirical observations enabled scholars to approach these empirical puzzles with new tools. And this is how the new trade theory developed."


On trade and inequality: an inverted U-shape?

"Most of the work on trade and inequality in the neoclassical tradition was focused on inequality across different inputs. So, for example, skilled workers versus unskilled workers, or capital versus labor, and the like. There was a lot of interest in this issue with the rise in the college wage premium in the United States, which people then found happened also in other countries, including less-developed countries. ...The other interesting thing that happened was that labor economists who worked on these issues also identified another source of inequality. They called it “residual” wage inequality, which is to say, if you look at wage structures and clean up wage differences across people for differences in their observed characteristics, such as education and experience, there is a residual wage difference, and wages are still quite unequal across people. In fact, it’s a big component of wage inequality.

Our aim in this research project, which has lasted now for a number of years, was to try to see the extent to which one can explain this inequality in residual wages by trade. It wasn’t an easy task, obviously, but the key theoretical insight came from the observation that once you have heterogeneity in firm productivities within industries, you might be able to translate this also into inequality in wages that different firms pay. ...We tried to combine these insights, labor market frictions on the one hand and trade and firm heterogeneity on the other ...We managed eventually, after significant effort, to build a model that has this feature but also maintains all the features that have been observed in the data sets previously. It was really interesting that the prediction of this model was that if you start from a very closed economy and you reduce trade frictions, then initially inequality is going to rise. However, once the economy is open enough, in a well-defined way, then additional reductions in trade friction reduce the inequality. Now, it is not clear that this is a general phenomenon, but our analytical model generated it. ... [I]t’s an inverted U shape ..."

"We computed productivity growth in a variety of OECD [Organisation for Economic Co-operation and Development] countries in this particular paper. We constructed R&D capital stocks for countries ... Then we estimated the impact of the R&D capital stocks of various countries on their trade partners’ productivity levels. And we found substantial spillovers across countries. Importantly, in those data, these spillovers were related to the trade relations between the countries. And we showed that you gain more from the country that does more R&D if you trade with this country more. This produced a direct link between R&D investment in different countries and how trading partners benefit from it. ...


One of the important findings—which analytically is almost obvious, but many people miss it—is that, if you have a process that raises productivity, such as R&D investment, then this also induces capital accumulation. So then, the contribution of R&D to growth comes not only from the direct productivity improvement, but also through the induced accumulation of capital. When you simulate the full-fledged model with these features, you get a very clear decomposition. You can see how much is attributable to each one.