The proportion of U.S. adults who are "in the labor force"--that is, who either have jobs or are unemployed and looking for a job--has been falling for a decade, as I explored in an April 26, 2012, post on "Falling Labor Force Participation." But for one demographic group, the elderly, labor force participation is rising substantially.


Braedyn Kromer and David Howard of the U.S. Census Bureau offer some snapshots of the data in their just-released survey brief, "Labor Force Participation and Work Status of People 65 Years and Older." For example, here are some comparisons for the labor force participation of men and women, for those over 65 and for some age subgroups. While labor force participation is down a bit for the 75+ age group, it is noticeably higher since 1990 for the 65-69 and 70-74 age group. 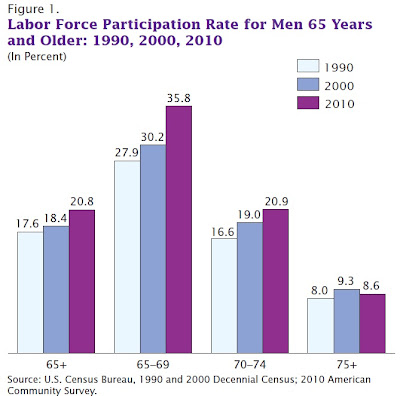 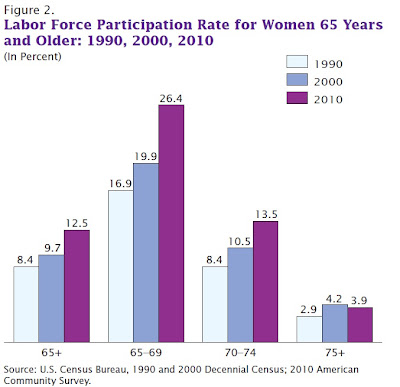 From a slightly longer-run perspective, 1990 was roughly the time period when labor force participation rates among the elderly were at their lowest. Here are a couple of figures from "The Increasing Labor Force Participation of Older Workers and its Effect on the Income of the Aged," by Michael V. Leonesio, Benjamin Bridges, Robert Gesumaria, and Linda Del Bene, which appeared in the Social Security Bulletin earlier in 2012. The figures show that for men over age 62, rates of labor force participation were falling through the 1980s, bottomed out around 1990, and have been rising since then. For women, the pattern is a little different, because a much greater proportion of women entered the paid workforce in the 1970s and 1980s, and so compared with earlier generations, a larger share of women continued working into their 60s and 70s, too. 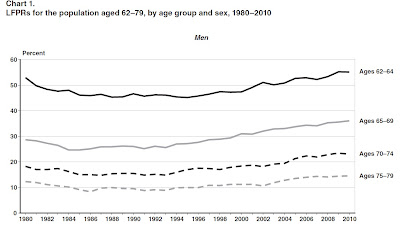 The rising labor force participation of the elderly in the last two decades represents a remarkable social change. Here's a figure created with the ever-useful FRED website at the Federal Reserve Bank of St. Louis, showing the labor force participation rate of those over age 55, going back to the late 1940s.Through the 1950s, 1960s, and 1970s, the notion that more and more people would retire earlier and earlier seemed like an inexorable social trend. But the patterns have changed--and they changed long before the Great Recession. 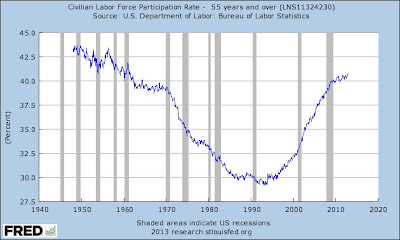 When I was starting off as a young adult in the paid workforce in the 1980s, I remember looking at this kind of data and thinking about how I might be retire--like many other people!--in my mid-50s. But that's clearly not going to happen for me; instead, my current expectation is to be working well into my late 60s or 70s. A steadily rising average age of retirement has become the new normal. But then, a pattern of "keep living more years while working fewer years" was never a viable long-term option.