Nicholas Bloom and John Van Reenen, along with various co-authors, have been leaders in academic work that bravely seeks to define "good management," surveys the management practices of firms,  and then looks at how firms with "good management" are performing. Much of their early work compared management practices across countries: for example, see their  article "Why Do Management Practices Differ across Firms and Countries?" in the Winter 2010 issue of my own Journal of Economic Perspectives.

But now the U.S. Census Bureau has for the first time used this approach as part of a survey of 30,000 U.S. manufacturing firms.  A group of authors include Bloom and van Reenen, together with
Erik Brynjolfsson, Lucia Foster, Ron Jarmin, and Itay Saporta-Eksten provide the first glimpse of these results in "Management in America," a discussion paper written for the Center for Economic Studies, which is based in the U.S. Census Bureau.

Before describing the results, it's useful to say a bit more about how "good management" is measured in this survey. They refer to it as "structured management," a term which is more neutral than  "good." But the basic concept is a list of 16 questions about management at the firm, divided into questions about monitoring, targets and incentives. They offer these examples:


For each of the 16 questions, they arbitrarily say that the lowest possible answer is given a score of 0, the highest possible answer is given a score of 1, and in-between answers are given fractional totals. They then just sum up the total points to get a management score for each firm. A number of other questions collect information both about the firm and about the personal characteristics of the middle manager answering the survey. Those who want additional gory details on the survey process can head for the report. Here are some findings.

The obvious starting point is to figure out whether manufacturing firms that get higher scores for "structured management" are performing better in some way. They divide up the firms into tenths, or deciles, from lowest score to highest, and find that firms with higher scores do better on profits, productivity, output growth, research and development spending, and patents. Here are a few sample figures to give you a feeling for what these relationships look like. The relationships continue to hold after adjusting for all the obvious factors, like size of firm, industry type, and the like. 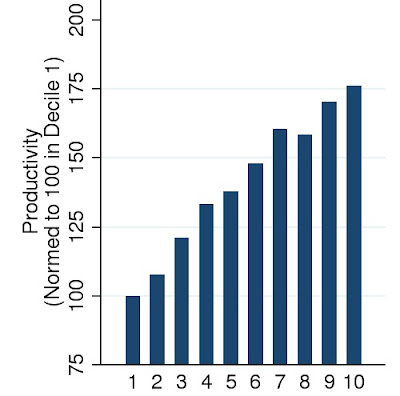 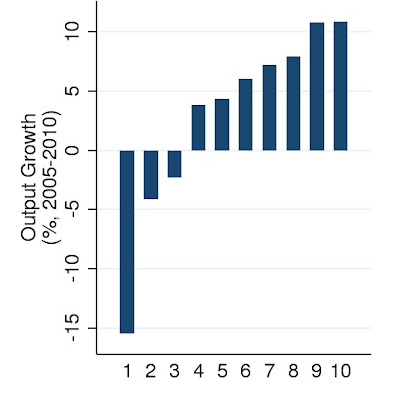 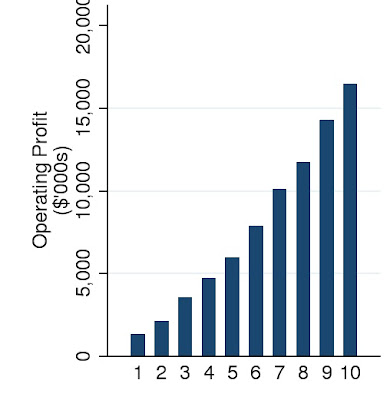 This research is, if not quite in its infancy, still in its toddler-hood, and so it would be unwise to draw conclusions too aggressively. But some preliminary conclusions would be: 1) It's possible to come up with a survey tool that captures at least a significant portion of what is meant by "good management;" 2) This measure of management appears to be correlated with positive performance by firms on a number of dimensions; and 3) This measure of management differs quite substantially across firms.

But there are also difficulties at this stage. Good management, of course, isn't just a matter of responding in a certain way on survey questions, or announcing a certain set of policies. In real life, good management is also about implementing those policies, and even of having a culture within the company in which the implementation of those policies is widely practiced and accepted. It may be, for example, that companies which lack structured management have a range of other problems or issues not well-captured by the existing data. It may be that implementing more structured management in a company that isn't used to this approach will prove difficult process in many firms. I expect that future research will delve more deeply into these issues, and others.