Too Much Concern about International Reserves?

(For the record, the IMF deserves credit for the existence of the Independent Evaluation Office, which was set up in 2001 with a staff of 11, mostly recruited from outside the IMF, to provide an alternative evaluation of IMF policies.)

Everyone agrees that international reserves have taken off in recent years, largely driven by changes in China, along with other emerging and developing nations. 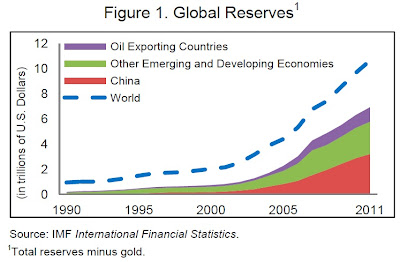 Worrying about large and growign international reserves may be part of the intellectual DNA of the IMF; after all, the organization was formed in large part to provide a way of dealing with balance of payments problems imbalances across countries. But as the Independent Evaluation Office report points out, countries holding these reserves feel that the IMF should be turning its attention to other targets. Here are some of the arguments (footnotes omitted).

International reserves are modest relative to overall global capital markets--and the private-sector portion of those markets in particular should be the real cause of instability and concern.

"International reserves remain small relative to the global stock of financial assets under private management ... There is considerable historical precedent and economic analysis to suggest that concerns about global financial stability should focus more closely on trends in private asset accumulation and capital flows. Country officials and private sector representatives also noted that the IMF should be more attentive to the accumulation of the private foreign assets that are the consequence of persistent current account surpluses, and which from a historical perspective have arguably been more destabilizing than official reserve accumulation." For illustration, here's a figure showing those international reserves in comparison with other global financial assets. 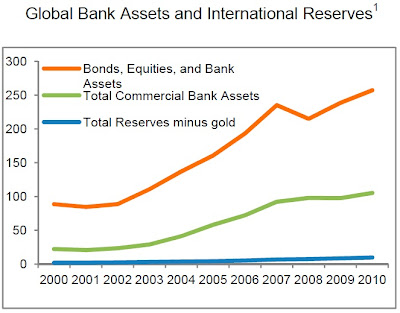 Countries that hold large international reserves see them as providing a number of benefits.

"There was a common view among country authorities that the IMF tended to
underestimate the benefits of reserves. Thinking about the tradeoff between costs and
benefits of reserves, country officials often mentioned a range of benefits that they
considered important but were not easily incorporated into either single indicators or formal
models. In addition to precautionary self-insurance (also emphasized by the Fund), they
mentioned other important advantages: reserves provide a country with reliability of access
and the policy autonomy to act quickly, flexibly, and counter cyclically, and, as was evident
during the global crisis, they inspire confidence. Reserves have also allowed authorities to
avoid the stigma associated with approaching the Fund for resources—an issue that is very
much alive in a number of countries."

Large international reserves are a symptom of the concerns that countries have about instability of capital flows in the global economy, and rather than worrying about this symptom, policy-makers should focus on underlying causes.


"Most country officials interviewed for this evaluation also felt that in a discussion of
the stability of the international monetary system, there were more pressing issues to be
considered. These included the fluctuating leverage in global financial institutions and its
impact on global liquidity conditions and hence capital flows and exchange rate volatility;
the role and effectiveness of prudential regulations and supervision in mitigating risks
associated with cross-border finance; and the difficulty in managing capital flows in recipient
countries."

A final point made in the IEO report, which seems to me to have a ring of truth, is that a lot of the concern over outsized international financial reserves is really about the reserves held by China. The enormous reserves held by Japan, for example, don't seem to stimulate the same amount of angst. It's probably not wise to try to set a wide-ranging international reserve policy for countries across the world based heavily on the experience of China, which is an extraordinary case in so many ways.
Posted by Timothy Taylor at 6:00 AM