Wealth-Income Ratios in the Long Run

Thomas Piketty and Gabriel Zucman have been building up an intriguing set of estimates of wealth/income ratios, both over time and across countries. The U.S. wealth/income measures look quite mainstream by European standards, both in the last few decades and when looking back to 1870. The graphs that follow are from an October 2012 presentation called  "Capital is Back:Wealth-Income Ratios in Rich Countries 1870-2010."

Just to be clear, "income" to economists is a "flow" concept over a period of time--for example, it might be what you receive in compensation for your labor and in return on your savings in a certain year. Wealth, on the other hand, is a "stock" concept of the accumulation of assets over time--for a person, it would include the value of equity in your home, as well as the value of what's in your savings account or other financial investments. High income and wealth do tend to go together. But it's possible to have high income, spend it all, and have little wealth; alternatively, it's possible to have low income but steady saving, or perhaps the good luck to invest in the early days of IBM or Apple or Google, and end up with high wealth.

For starters, here's the wealth/income ratio for nine countries from 1970-2010. To help make sense of the graph, let's pick out a few of the countries. The line that peaks far above other countries in the middle of the figure, at around 700% in 1990, is Japan at the height of its stock market and property bubble. The country with the highest wealth/income level in 2010 was Spain, presumably driven by a property-market price bubble in that country. The line of black squares, marching higher in recent years, is Italy. In short, a high wealth/income ratio can be a danger signal of possible bubbles in asset markets. Meanwhile, fundamentally healthy economies like Germany (dark triangles) and Canada (light triangles) have seen a rise in wealth/income ratios, but are at the bottom of the range of this group of countries. The U.S. (hollow triangles) is in the middle of the pack. If you look closely, you can see a rise in the U.S. wealth/income ratio in the late 1990s for the dot-com bubble, and again in the mid-2000s for the housing price bubble, but the 2010 value for the U.S. is near the bottom of the range. 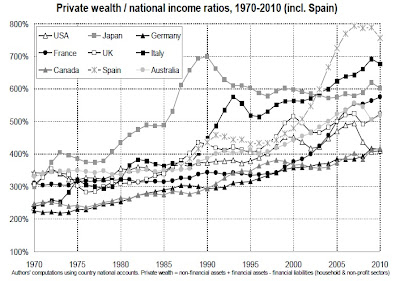 Now here's a longer-term perspective, from 1870 to 2010, comparing several major economies of Europe and the United States. In this long-run perspective, both Europe and the U.S. have had a U-shaped pattern of wealth/income ratios over time, but the European U rises higher and dips deeper than the American U. 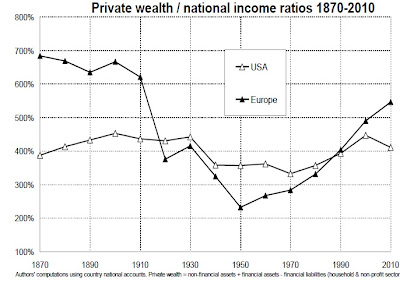 Just what the wealth/income ratio telling us? Here are some thoughts:

1) When wealth/income spikes up, it's a potential danger sign of financial instability in the economy.

2) Wealth is typically much more concentrated than income, and so when the wealth/income ratio is high, the political power of those holding lots of assets is probably stronger. The power of mega-rich billionaires, not just in the U.S. and Europe, but also in China and across fast-growing economies of the world, is large and growing.

4) As Picketty and Zucman write: "There’s nothing bad about the return of capital: k is useful; but it raises new issues about k regulation & taxation." In general, as wealth becomes relatively more important, it deserves a larger share of our social discussion and public policy attention.

For those who are interested, here's a post from June 13, 2012, on "Wealth by Distribution, Region, and Age" in the United States.