C. Robert Taylor and Diana L. Moss have written "The Fertilizer Oligopoly: The Case for Antitrust Enforcement," as a monograph for the American Antitrust Institute. Those looking for examples of possibly anticompetitive behavior, whether for classroom examples or for other settings, will find the argument intriguing. Taylor (no relation!) and Moss set the stage this way:

"Fertilizers are a critical input in the agricultural sector. Industrial farming in much of the world is heavily dependent on external inputs of nitrogen, phosphorus, and potassium or potash. Following an industry shakeout from 1998 to 2004, fertilizer prices increased dramatically in 2008.High prices persisted for several quarters, dipped in 2009, and have since returned to supracompetitive 2008 levels. The fertilizer industry has, and continues to be, marked by considerable excess capacity. At the same time, large buyers of fertilizer such as China and India are becoming increasingly powerful, putting downward pressure on high prices. Earlier in 2013, the decision of key eastern European potash producers to refuse to deal with such buyers or cut their prices has caused significant disturbance among global producers, with falling profits industry-wide. The foregoing pattern raises a number of questions about the dynamics of supracompetitive fertilizer price increases and profits. Price setting appears to have been the dominant strategy in 2008, shifting to supply cutbacks in 2011 in order to strengthen and maintain prices, particularly with major customers. This was followed by apparent defections from tacit or explicit agreements among global potash producers in mid-2013. Such defections and the subsequent breakdown in any tacit or explicit agreement among producers should be a strong signal that anticompetitive coordination has been at play."


They also point out that the fertilizer industry has a history of cartels going back more than a century. One writer identified 83 fertilizer cartel episodes from 1902 to 2010. The fertilizer industry includes a number of separate firms, but in the U.S. and Canada, they are organized into government-approved export cartels. In the United States, the Webb-Pomerene law passed back around World War I allowed small and medium-sized companies to form export cartels to counterbalance the power of foreign governments, as long as such cartels did not affect domestic prices. The fertilizer export cartel has been up and running since. Nowadays, the global industry structure looks like this:

"The structure of the world’s phosphorus and potash markets, while complex, may best be viewed as duopolies with small, high cost fringe firms. The phosphorus duopoly is comprised of
the U.S. export cartel, PhosChem, operating with limited antitrust immunity under Webb-Pomerene, and the Moroccan monopoly OCP. There are presently only two members of PhosChem – PotashCorp and Mosaic. PhosChem members account for 52 percent of world phosphorus trade. ... The potash duopoly is comprised of the Canadian sanctioned export cartel, Canpotex, that markets potash from Saskatchewan, and a Russian cabal.28 The three owner-members of Canpotex are PotashCorp, Mosaic, and Agrium, each with a fixed market share of 54 percent, 37 percent and 9 percent of export sales, respectively. Canpotex accounts for 61 percent of world potash trade, including trade by other potash companies in which PotashCorp has significant ownership. The Russian cabal accounts for 32 percent of trade, with a high-cost, non-integrated fringe accounting for the remaining seven percent.  ... Many of the major phosphorus producers also manufacture nitrogen fertilizer, partly because a source of nitrogen is required to stabilize phosphorus, and partly because many fertilizer manufacturers sell blended nitrogen-phosphorus-potash fertilizer at wholesale and retail. ... While global nitrogen fertilizer producers are not as closely intertwined as are phosphorus and potash producers, duopolies in phosphorus and potash potentially invite antitrust mischief. They achieve this, at a minimum, through the sharing of information and executive decision-making between PhosChem and Canpotex, and the division of markets inside and outside North America. "

Here's the pattern of fertilizer prices in recent years. In the nature of things, it is difficult to prove that price increases are a result of oligopolistic behavior as opposed to market prices, although Taylor and Moss provide a number of statistical and anecdotal arguments to make the case. 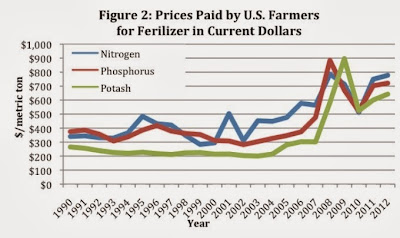 Their narrative is that the fertilizer oligopoly may have been derailed in 2013 by China and India. "Major fertilizer customers such as India and China have developed into powerful buyers, a shift that could have potentially important implications for the pricing and output strategies of large sellers. ...Reports indicate that fertilizer contracts for India and China are now negotiated by a single entity, or only a few entities for each country. ... The exercise of countervailing power by China and India may be responsible in part for the significant market disruption in mid-2013."

The Federal Trade Commission has not pushed back against the fertilizer oligopoly, instead arguing that the price spike in 2008 was related to various demand and supply factors. However, in June 2012 the U.S. Court of Appeals for the 7th Circuit refused to dismiss a private antitrust suit concerning the potash market, and wrote in a unanimous opinion, “the inferences from these allegations is not just plausible but compelling that the cartel meant to, and did in fact, keep prices artificially high in the United States.” Soon after, the case was settled for more than $100 million.

Taylor and Moss write: "Damages from supra-competitive pricing of fertilizer likely amount to tens of billions of dollars annually, the direct effects of which are felt by farmers and ranchers. But consumers all over the world suffer indirectly from cartelization of the fertilizer industry through higher food prices, particularly low income and subsistence demographics. ... [I]t is clear that corporate and political control of essential plant nutrients may be one of the most severe competition issues facing national economies today." Without prejudging the verdict, the fertilizer market seems like a situation where the Federal Trade Commission, the U.S. Department of Justice, and antitrust agencies around the world should be taking another look.