As the unemployment rate has drifted down from its peak of 10% in October 2009 to its current level at 7.3%, a number of commenters have noted that the labor force participation rate has also been falling, from about 66% in late 2007 before the start of the recession to a current level of around 63.2%. Thus, is the drop in the unemployment rate nothing more than a drop in the share of adults seeking to participate in the labor market in the first place? More specifically, what do the statistics tell us about whether those who are outside the labor force are seeking to work?

Just to be clear on the basics, the unemployment rate is calculated as part of the Current Population Survey, which defines unemployment in this way: "Persons are classified as unemployed if they do not have a job, have actively looked for work in the prior 4 weeks, and are currently available for work. Persons who were not working and were waiting to be recalled to a job from which they had been temporarily laid off are also included as unemployed. Receiving benefits from the Unemployment Insurance (UI) program has no bearing on whether a person is classified as unemployed."

What about those who would like a job, but are so discouraged that they have given up on looking? The same survey asks people who are not in the labor market various questions, and divides them up into categories. As of August 2013, there were about 90 million adults not in the labor force. However, many of them were out of the labor force by choice: for example, they were retired, or full-time students, or spouses staying home with children. The survey asks those who are out of the labor force if they want a job, and in August 2013, about 6.3 million answered "yes." Here's a graph from the Bureau of Labor Statistics website showing the number of those out of the labor force who tell the survey that they want a job. The number has clearly risen substantially, by about 2 million, since the start of the recession in 2007. However, it's interesting to note that the total of those out of the labor force who want a job is not that different now than it was back in 1994, in the aftermath of the 1990-91 recession and before the dot-com boom of the mid- and late 1990s had taken hold. Of those who are out of the labor force but would like a job, a subcategory is the "Marginally Attached to the Labor Force," which refers to "persons who want a job, have searched for work during the prior 12 months, and were available to take a job during the reference week, but had not looked for work in the past 4 weeks." In August 2013 there were about 2.3 million of the "Marginally attached," and here's a graph showing how that number has evolved over time. 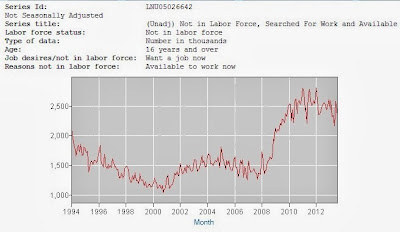 Of the "Marginally Attached," yet another subcategory is "Discouraged Workers," which refers to "those who did not actively look for work in the prior 4 weeks for reasons such as thinks no work available, could not find work, lacks schooling or training, employer thinks too young or old, and other types of discrimination." There were 866,000 discouraged workers in August 2013, and here's how their number has evolved over time.

So what does all this mean about interpreting the fall  in the unemployment rate? Troy Davig and José Mustre-del-Río discuss what they call ""The Shadow Labor Supply and Its Implications for the Unemployment Rate" in the Third Quarter 2013 Economic Review published by the Federal Reserve Bank of Kansas City. They refer to those who are out of the labor force but tell the survey that they would like to work as the "shadow labor force." They write:

Although Davig and Mustre-del-Río don't put it this way, my own interpretation would be that the decline in the unemployment rate since about 2010 is the sign of an economy that is tottering back to a healthier labor market. The number of those out of the labor force who tell the survey that they would like a job bounces around through the year--it's not a seasonally adjusted number--typically peaking in June when people start looking for summer jobs. But it hasn't shown any particular trend since 2010. I've posted earlier about the long-term decline in the labor force participation rate, a trend which predates the Great Recession, here and here.