Americans on average are healthier and living longer. U.S. jobs on average are moving away from hard physical labor and toward service jobs and brainwork. And yet, the percentage of Americans who are officially too disabled to work has been rising for a quarter-century. Tad DeHaven lays out some of the trends in "The Rising Cost of Disability Insurance," written as Cato Institute Policy Analysis #733 (August 6, 2013). 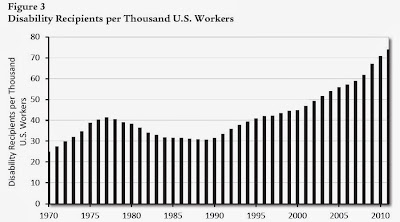 As you might guess, this sharp rise in disability has less to do with a sharp drop in levels of physical health, and more to do with a sharp rise in people who are disabled with "nonexertional conditions," like someone who has a high level of depression or anxiety, or who experiences pain, often back pain, from a "musculoskeletal condition." These are real conditions, and they are conditions where is can be hard to verify their severity. DeHaven points out that the National Academy of Medicine estimates that 116 million Americans suffer from some form of chronic pain, and the National Institute of Mental Health estimates that 61 million Americans suffer from some mental disease. Of course, most people with these conditions manage to continue their day-to-day functioning, including holding a job.

The Social Security Disability Insurance program is funded by a payroll tax of 1.8 percent of income up to a certain level, which is $113,700 this year. With the rising number of recipients, it's no wonder that the SSDI trust fund is even now dropping below the minimum level for financial solvency and will probably be empty in a few years, according to the annual report of the system's actuaries.  (The top line shows the path of the Social Security trust fund, with three scenarios for the future; the bottom line shows the path of the disability insurance trust fund, again with three scenarios.) 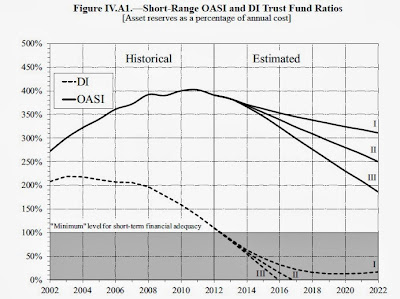 There are essentially two broad approaches for fixing disability insurance, and it would behoove us to choose both of them. The first approach is to encourage people to treat disability as a short term event, and to allow disability to be partial, and thus allowing for some work. This might be accomplished through some combination of program restructuring and financial carrots. For example, one approach along these lines would have employers purchase private-sector disability insurance that could last up to a couple of years. During this time, the private-sector insurance company would have an incentive to find ways to help the person get back to work, at least part-time. If such efforts didn't succeed after a couple of years, only then would the person migrate over to the federal disability insurance program. Here's a discussion of such a proposal from David Autor and Mark Duggan. Another approach would tinker with letting those who are receiving disability benefits continue to receive some of those benefits even if they find work. One never wants to set up a situation in which earning $1 means losing $1 of government benefits, because the incentives are much the same as a 100% marginal tax rate. Instead, disability benefits could be phased down so that for every $1 earned, the person might lose only 25 cents in disability benefits. Here's an example of such a proposal from Jagadeesh Gokhale.

The other approach is to get tougher about demanding that those who receive disability insurance payments are really and truly disabled. DeHaven points to a number of troubling anecdotes that suggest the possible scale of the problem. For example, anyone denied a disability claim can appeal the decision at five levels, represented by lawyers working for contingency fees. Fees paid to lawyers as a part of disability appeals tripled from $425 million in 2001 to $1.4 billion in 2011. Some judges find that almost 100% of claims of back pain should receive disability status, while others find that fewer than 20% of back pain claims deserve disability status. During a recent four-year period a single judge in Pennsylvania overruled the Social Security Administration on 2,285 cases, and made these 2,285 people eligible for disability insurance payments. The decisions of that single judge have led to $2 billion in disability insurance payments. There are private-sector consulting companies who are hired by states and paid several thousand dollars for every person who they manage to shift from a cash welfare program, which is partly funded by the state, over to disability insurance, which is funded by the federal government. One news story (for National Public Radio, no less) referred to all this as the "Disability-Industrial Complex."

For some people, disability insurance has become a way of exiting the labor force. It's hard for me to get into high dudgeon over these people, because I suspect that many of them have at least mild disabilities and also lousy job prospects, especially the last few years. But the hard fact is that the disability insurance program has limited funds, and is headed for bankruptcy. If it pays those funds to a substantial number people who are only marginally disabled,  and could be working, it cannot pay higher benefits to the more severely disabled.
Posted by Timothy Taylor at 6:00 AM